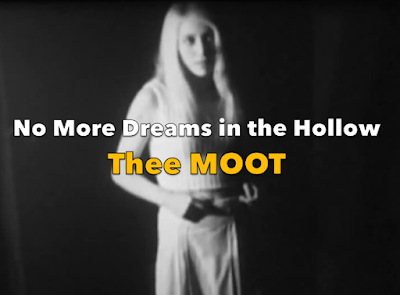 Thee Moot have just released a great new video to a track "No More Dreams in the Hollow" taken from their excellent full-length album "Peel It To Reveal It" which made it into Retro Man Blog's top LP's of 2019. The band, who feature bassist Mark Leech and vocalist Nick Stone from early 80's Psych-Mod legends The Onlookers and Mark's former bandmates from The Transient's, guitarist DC and drummer Freezer Pinch have been one of our favourite bands of the past couple of years and "Peel It..." follows on from their equally impressive debut mini-album "Tomorrow's Calling". Check out the video below and please subscribe to their YouTube channel here as more videos will follow.

You can order "Peel It To Reveal It" from Thee Moot's Bandcamp site here and please do visit their official Facebook page here for news and further information on the band.
Posted by Retro Man at 15:06 No comments:

In Episode 5 of our special Retrosonic Podcast "Lockdown Lowdown" series we welcome Duncan Reid, formerly the bassist with original Melodic Punk Pop legends The Boys and currently performing and recording with his own band The Big Heads, into the virtual Retrosonic studio. In this thoroughly enjoyable romp through Duncan's life we go right back to his earliest childhood musical memories including seeing the Rolling Stones on TV amongst his disapproving Beatle-loving family and we discover the first record he bought with his own pocket money. He tells us of the first gig he went to and what he found in his Dad's cupboard and how it played an important part in his life. There are examples of his favourite singles and albums along with the artists and gigs that have had an impact on him over the years. He explains who influenced his bass playing and confesses to how he upset Bass Guitar magazine. Then we learn why he was awarded the freedom of a South American capital city, how he became big in Kensington and Chelsea and even bigger in Japan (without even knowing it!). All this and much, much more! Generously soundtracked by Duncan's own pick of the Pops throughout the episode and of course, including some of the very best of his own recorded work from his time with The Boys and Hollywood Killers to his debut solo album and bang up to date with The Big Heads excellent new LP "Don't Blame Yourself".

Retrosonic Podcast can be streamed and downloaded directly below or from our Soundcloud site here. Alternatively, you can subscribe for free at iTunes and Apple Podcasts.


Here's the great video for "To Live or Live Not" from the new Big Heads album, enjoy!

In this episode of our Retrosonic Podcast Lockdown Lowdown series we welcome Mike and Elsa from one of our favourite new groups, The Jack Cades, following the release of their superb second album "Perfect View". Mike and Elsa take us on a musical trip through some of their favourite albums, singles, gigs, happenings and people that had an influence on their own impressive work with Thee Vicars, The Baron Four, The Missing Souls and of course with The Jack Cades. Generously soundtracked by some of their favourite songs including Nirvana, The Milkshakes, The Masonics, Rodriguez, The Stone Roses, Buzzcocks, The Beatles, The (International) Noise Conspiracy, Spacemen 3, The Squires and The Brian Jonestown Massacre. There's also a pick of their very own music from Thee Vicars, The Missing Souls, The Baron Four and of course The Jack Cades.


Please click on the highlighted links above for more information on the featured bands and how to buy their music. The Jack Cades Facebook page is here for news about on-line performances and releases. Please kindly do what you can to support Bands, Artists, Record Companies and Venues in these difficult times. Subscribe to Retrosonic Podcast for FREE at iTunes or at our Soundcloud site/archive here. This episode can also be downloaded or streamed directly below.