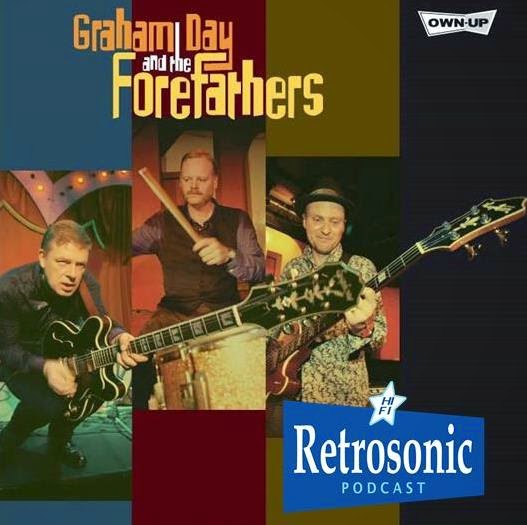 Graham Day & The Forefathers were formed to “crank out choice cuts from four Graham Day-fronted bands - The Prisoners, The Prime Movers, The Solarflares and The Gaolers - distilling 30-odd years of high quality song writing, lo-fi production and high energy performance to their stripped down Garage-Rock essence”. Steve from Retro Man Blog meets up with Graham and his long-time bandmates Allan Crockford and Wolf Howard to discuss their forthcoming album “Good Things”, which sees them finally coming to terms with an outstanding musical legacy. They candidly talk us through their fascinating history and pick out a few favourite songs from each of the line-ups. Along the way we also discuss and play some of the other bands and artists they have worked with over the years, such as The James Taylor Quartet, Billy Childish, The Daggermen, The Spartan Dreggs, The Galileo 7 and Planet. Generously sound-tracked by a hand-picked selection of over twenty songs from the trio’s varied career, including some exclusive tracks from the new album “Good Things”, this Podcast is a must-have for every die-hard fan and a perfect taster for those newcomers wanting an introduction to one of Britain’s best ever songwriters.

Graham Day & The Forefathers will play 229 The Venue in London on October 31st and you will be able to pick up copies of the new album at the gig exclusively prior to it’s official release. You can book advance tickets to the show here at the AGMP web-site. Wolf Howard is currently playing with Billy Childish in The CTMF and Damaged Goods Records have just released their new single “Punk Rock Enough For Me”. Allan Crockford’s excellent band The Galileo 7  have a fantastic new album “False Memory Lane” out now and you can get more information on this and forthcoming gigs at their official web-site. So, pour yourself a Whisky, sit back and enjoy...!

You might also be interested in these Retrosonic episodes with Billy Childish, Ian Ballard from Damaged Goods Records and the Pubmonkey special with the movie’s writer Jamie O’Hara and Glenn Page from The Len Price 3, who provide the soundtrack. All episodes are free to listen to and download at the Retrosonic Podcast Soundcloud site and don’t forget to check out the Blog archive for more information, photos and features including a report on our gig with Graham Day & The Forefathers at the Half Moon Putney back in June. Our next Retro Man Blog Night featuring The Len Price 3 is at The Half Moon Putney on Friday September 26th, for advance tickets and more information please check out the link here. With sincere thanks to Graham, Allan and Wolf.

Keith Levene: "I Was a Teenage Guitarist 4 The Clash"

Keith Levene, the hugely influential guitarist with The Clash and Public Image Ltd has just released a brand new book entitled “I was a Teenage Guitarist 4 The Clash”. These customized hand made books are all unique and are available in Prototype and Standard issue, hand printed and put together by Keith himself and he will also sign them to order at your request. If you are interested in ordering a copy then check out the gallery and store on the official web-site to get an idea of what will be coming your way. With regard to the book’s content, Keith says “This is a story about the beginning of The Clash…the only band that matters according to some. The alternative original punk choice to The Sex Pistols, another band that mattered. Join Keith as he takes you along his teen ride through real life. This is not an autobiography but it is a true story. It will put in the time at the place. The only place that mattered? Well maybe to some. Take a ride through The Hippest Scene in London in 75/76 and witness how it really came together”.

At 17, the skateboarding/pin-ball playing/guitar virtuoso Keith Levene met his future Clash co-founder Mick Jones in West London against the backdrop of the then-developing Punk scene. Thereafter, the two young men decided to launch The Clash - the band that was second in importance on the burgeoning punk scene only to the Sex Pistols in the mid-1970s. In “I Was a Teenage Guitarist 4 the Clash” Levene recounts the early days of Punk and his love of skateboarding and playing guitar. True to the original punk ethos, Levene is self-publishing his book and the original custom covers that come with each one. “This is not unlike my experience in distributing my original “Commercial Zone” LP back in 1983-84. I created the custom covers, pressed the albums myself, and distributed them to various record shops around Manhattan – on my skateboard!”. Levene laughs as he recounts the dangers of dodging busy NYC traffic while maneuvering boxes of LPs on his beloved red wheeled skateboard.  “Later when I was with PiL and recording “Metal Box” the record company took the wheels off my board because they were afraid I might fall and break my arm,” he smiles. In his book, Levene details his encounters with other central figures in the classic first wave of British punk, including Sid Vicious, John Lydon, Billy Idol, Viv Albertine, Paul Simonon and Terry Chimes. “It was a very exciting time,” recalls Levene. “There was a very young, very fresh, very exuberant feeling in the air – like anything was possible", Levene recalls. “And not just for those of us involved in music. It wasn’t just about expressing oneself through music although the music was certainly very important. If you had a viewpoint you wanted to express – whether the vehicle was through fashion, art, the written word, or even how you presented yourself to the world – the emerging scene in West London welcomed you,” he explains. “The feeling I want to relate to those who read this book is that they are accompanying me on a magical mystery tour of West London during those incredibly exciting early days of punk” Levene says.

Although it might appear that once he had left Public Image Ltd Keith had disappeared from the musical landscape, he has actually been involved in various projects over the years. For example he has produced demos for the debut Red Hot Chili Peppers album and worked together with DJ Matt Dike, experimenting with sampling and hip-hop. He released his first solo album “Violent Opposition” which featured members of the Chili Peppers and contributed to industrial rock super group Pigface's album “Easy Listening”. He’s also been involved in soundtrack and computer work and has released several other solo records, among which was the “Killer in the Crowd” EP in 2004. In 2010 Levene got back together with his former colleague in Public Image Ltd, bassist Jah Wobble and collaborated on the album “Psychic Life” and later on the pair released an album “Yin & Yang” as well as performing “Metal Box In Dub” on stage. This was great news to fans of Public Image Ltd as Keith had rarely played live since he left the band in 1982.

It was towards the end of 1982 and the band were planning on releasing a mini-album entitled “You Are Now Entering A Commercial Zone” and a single “Blue Water”. However, against Keith’s wishes this was all scrapped and the band went back to the studio to start work on a full length album that would go on to be released as “This Is What You Want...This Is What You Get”. Before the new version was released Keith Levene took the unfinished “Commercial Zone” tapes and did his own mix. He then tried to persuade Virgin Records to release this version under the album’s original working title to no avail. Snubbed by his own band and record label, Keith paid for a limited pressing of the album and distributed it himself in America on his own PiL Records Inc. However, Virgin Records took out legal action to prevent Keith re-pressing any more copies of the album and that was the end of that. With the "Teenage Guitarist" book he has put to good use the lessons he learned from the self distribution and promotion of "Commercial Zone" and is now producing what is sure to be a piece of work that will delight fans and collectors alike. Here's Keith himself explaining more about the new book. All photos above courtesy of Keith Levene.

Subscribe to Keith’s YouTube channel where he will be doing readings from “I was a Teenage Guitarist 4 The Clash” and showing viewers some of the various customized options that are available. He also has a Twitter account which you can follow to receive regular updates and news.