The Soundtrack of Our Lives - The last ever UK show, Heaven London September 13th by Francis Barry-Walsh 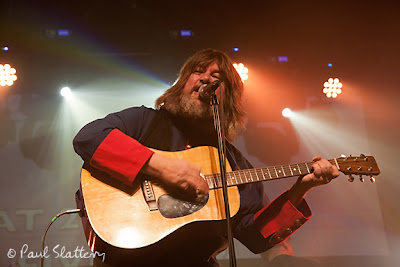 It’s coming up to 11 years since I acted on a friend’s recommendation and bought a copy of The Soundtrack of Our Lives "Behind The Music". The album is a spectacular re-imagining of rock music from the previous 50 years, full of great tunes, great riffs and no tortured, dark and edgy nonsense. There it could have all ended for me had it not been for going to see the band live for the first time at London's Cargo Club back in February 2002. The stage seemed barely large enough to accommodate a six piece had they been standing still, yet they threw themselves about and apart from an attempt by Mattias to boot Ebbot up the arse and Ebbot wandering into the crowd during "21st Century Rip-Off", they managed not only to stay on stage but put on a brilliant show. That time seemed like their moment to make it big, yet curiously they have never done so in England, despite a devoted following and critical acclaim. 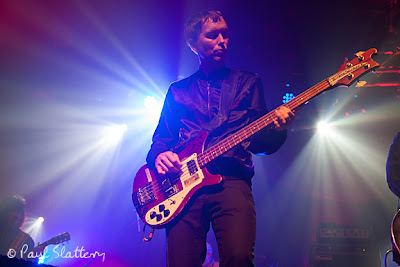 Still that’s OK, because now on the occasion of their last U.K. show, I’m at Heaven, a small venue underneath the arches in Charing Cross and the good humoured and polite audience are there, not only because they are all fans, but also I think, to thank The Soundtrack of Our Lives for some great music, some great shows and for lifting our spirits over the years. Rather like a Premiership football ground, 10-15 mins before the scheduled start, the venue seemed empty but come the start, the place had packed out and David Quantick came on in a crumpled grey suit to deliver a witty eulogy on the band with messages of thanks from  Noel Gallagher, ‘Bono’, Mani and Tim Burgess. They are indeed a great Rock’n’Roll band as he said and over the next 2 hours, they went on to demonstrate why they are so loved.  The Soundtrack of Our Lives never make big entrances, they don’t really have to when you have Ebbot as a focal point and when the band as a collective unit have such presence. 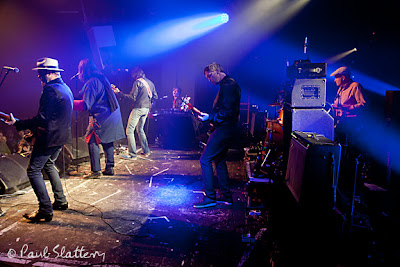 They started with "All for Sale" and by the time they moved onto "Believe I’ve Found", Martin was up and about, whilst Mattias and Ian were, by comparison restrained. Maybe Ian was weighed down by his luxuriant beard which, combined with his hat, put me in mind of ZZ Top. By the time they launched into "Confrontation Camp", Mattias and Ian were back on message effecting all their moves, poses and jumps, and the crowd and band were together as one. Their set was a mix of old classics ("Broken Imaginary Time", "Infra Riot", "We’ll Get By") and new ones, and not having heard them play songs from the new album, "Faster Than the Speed of Light" really stood out and it’s taken last night’s show to make me better appreciate "Throw it to the Universe", their last album. Isn’t that always the way? 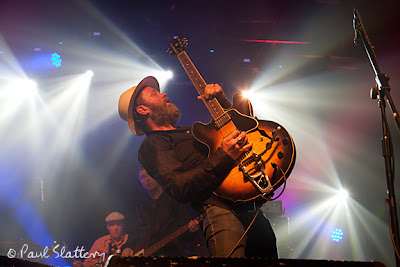 Halfway through the set, Ebbot had taken to placing the tambourine on his head and it suited him, though I kept thinking it’s Obelix up there. During all this visual mayhem, it can be easy to forget Fredrik’s brilliance on the drums keeping it all together with smiley Kalle on bass, driving the songs along. "Thrill Me" followed and it’s a great glam rock foot stomper and Ian’s chance to try to steal the stage limelight from Ebbot. This was followed by the soaring "Lost Prophets in Vain" from the "Communion" album and then really just one high after another – "Second Life Replay", "Sister Surround", "The Passover" - a beautiful song, “don’t pass it on if you know it’s wrong”.  I love this song with its elegiac mood which further proves that the band can do slow-ish & wistful as well as rock. 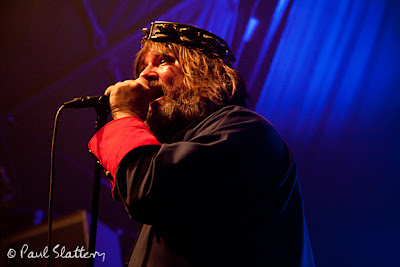 Naturally they had to finish with a blinding version of  "Mantra Slider" with Ebbot walking into the crowd and being crowd-surfed back. Oh, and then they came back to really finish off on a high with "Galaxy Gramophone", "Grand Canaria" and "Instant Repeater '99" and then bowed to the audience when it really should have been the other way round. They could have gone on and on, but hey ho, they probably needed a rest, a good drink and Martin probably needed to rinse out his t-shirt.

Many thanks to Francis Barry-Walsh for the review and Paul Slattery for the photographs.

All material strictly copyright of the contributors and Retro Man Blog 2012.