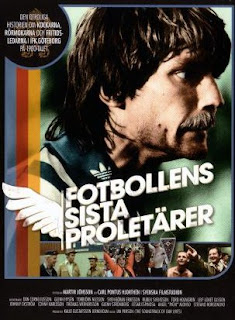 Ian Person, guitarist with The Soundtrack of Our Lives, has written the soundtrack music to a new documentary movie about IFK Göteborg's European footballing adventures in the 80's. The film is called "Fotbollens Sista Proletärer", which roughly translates as "Football's Last Proletarians", and it's just been released in Sweden on DVD (with English subtitles). As you can probably tell from the title, the story concentrates on the part-time underdogs of IFK pitted against the wealth and condescension of the footballing elite of the time, such as Hamburg SV and Barcelona.

Firstly, it’s the 1982 season and we see Sven-Göran Eriksson managing a team fighting bankruptcy, only their progress in the UEFA Cup and money raised from the Supporter’s Club prevented this from happening. They reach the Final and, despite beating Hamburg SV 1-0 at home in the first leg, they arrive in Germany for the away fixture to be greeted by stalls selling T-shirts, flags and scarves somewhat arrogantly proclaiming “Hamburg SV UEFA Cup 1982 Winners”. Sven sees his opportunity and takes a banner into the dressing room; there was no longer a need for a motivational speech and IFK win 3-0 on the day to lift the UEFA Cup. Sven also leads the team to the Allsvenskan League Title and Swedish Cup, so the part time cooks and plumbers end the season as Treble Winners. The success and higher profile means that the best players such as Torbjörn Nilsson, Dan Corneliusson and Glenn Hysén are snapped up and most go abroad to play professionally with Sven leaving to manage Benfica.

The story then moves forward to the 1986 European campaign and you can almost sense the end of the joyful innocence, not only in the team, but also in Sweden as a whole. Shockingly, the Prime Minister Olof Palme is assassinated and we see the rise of consumerism which makes the ideals of the social democratic “Swedish Model” seem out-dated. IFK reach the Europa Cup Semi-Final against Terry Venables’ Barcelona and against all the odds and predictions win the first leg 3-0.  As the away leg approaches and with Barca facing an embarrassing 3-0 against score line, rumours of corruption and bribery surface. There is a bizarre twist when it is found out that some girls were hanging around the IFK team’s Hotel in Barcelona trying to lure the players into joining them for drinks allegedly spiked with drugs to cause illness before the match. The game is finally underway and IFK score first, however after pressure from the Barcelona players the referee suddenly disallows the goal. Barca then take control and the game ends tied at 3-3. So, it’s all down to penalties, Roland Nilsson misses and, that’s it, the dream is all over.

The film then catches up with some of the IFK players today, all are remarkably down to earth. Johnny Ekström comes across as a laid back cool customer, Torbjörn Nilsson is shy and self depreciating despite his amazing skills. We see Glenn Hysén wearing an IFK scarf greeting other fans at a home game and Ruben Svensson working in a children’s care home. But it’s Dan Corneliusson who is the star of the movie for me, you can sense in him a longing and tinge of nostalgia for the team spirit of the old IFK playing days. There is also a very poignant and moving scene where we follow him to Italy to visit his old Como team-mate Stefano Borgonovo who is unfortunately very ill with a terminal muscle wasting disease.

The film is well directed and moves at pace with great archive footage. However, it can be enjoyed even if you are not a football fan, as it also highlights the social and political side of Sweden at the time and portrays an age of footballing innocence long since disappeared from these times of pampered and over-paid Premier League stars.

And then of course you have the added bonus of the excellent soundtrack from Ian Person! The overall feel of the music is very up-tempo, with some beautiful acoustic and Flamenco guitar pieces,  here is a brief song-by-song guide:


“Voodoo Boogie” the movie’s main theme, is built around an insistent riff with slide guitar.
“Glenn #1” is a majestic thumping theme over highlights of the first leg win at home against Barcelona and Nilsson’s two great goals.

“IFK ’75” has slide guitar and harmonica reminiscent of “Exile On Main Street” era Rolling Stones.
“Torbjörn Theme” is a gentle acoustic version of “Fool’s Parade” which previously appeared on Ian’s “Diamonds In The Rough” album.
“Wermeland” is a Flamenco tinged guitar piece.
“Hail to Glenn” features a sinister, repetitive riff that perfectly suits the scenes of the players sliding in the muddy pitch and the crunching tackles from a cynical Hamburg SV team.
“Shake You D.C.” is almost a fully formed song, a real thumper with vocoder vocals.
“Take Us Home - UEFA Cup ’82” is my highlight of the movie soundtrack. It features beautiful strings and has an acoustic sound similar to R.E.M. around their “Out of Time” period. The song builds majestically as IFK lift the UEFA Cup.
“Desperate” is a catchy rocker.
“Here it Comes” a lighter number with nice guitar and piano.
“Run Johnny Run” is just one big catchy chorus in tribute to Johnny Ekström.
“Valencia Theme” is in a John Barry style, reminiscent of a spy movie theme riff .
“Barcelona Semi Final” is suitably dark and ominous music.
“Borgonovo”, in keeping with the moving scene of Corneliusson visiting his ill ex-team-mate, is perfectly suited, being full of beautifully layered Flamenco guitars.
“Dire Situation” is a catchy rocking number that plays out over the end credits.

Ian Person kindly spared some time to answer a few questions about his involvement with the soundtrack to the movie. Ian is a long time IFK supporter and even sports a Gothenburg lion tattoo and a beautiful custom made First Act Semi-acoustic guitar embossed with the Gothenburg logo. You can see some great photos of the guitar here.
Q: Ian, how did you get involved in working on the soundtrack for the movie?
Ian: Kalle, who plays bass in The Soundtrack of Our Lives, is the producer of the film so he suggested me to the two directors, Carl Pontus Hjorthen and Martin Jönsson. They both knew about me and my song writing and also that I was a huge IFK fan.
Q: What musicians and producer did you work with?
Ian: I wrote and recorded everything in my own studio except the drums, which were recorded at Kalle's studio (Svenska Grammofon Studion) in Gothenburg. The drummer is a well known session musician called Johan Håkansson. Additional musicians on the recordings include harmonica played by Mattias Hellberg and violin by Martin Hederos. It was recorded and mixed by John Rönneklev but supervised by me.
Q: Will the soundtrack be released as a separate album?
Ian: It will be included in next DVD edition but not released as a separate CD.
Q: Did you get to meet the players featured in the movie such as Corneliusson and Nilsson?
Ian: Yes, I met most of the guys at the film's premier. However, some of them  still go to all of the IFK home games, like Glenn Hysén, whose son, Tobias, is the best striker in Allsvenskan.
Q: In the film they seemed very down to earth guys, how did they react to the movie?
Ian: They all loved it! All still have both feet firmly on the ground!
Q: How long have you been an IFK supporter?
Ian: I've been an IFK supporter since my first game in 1978.
Q: Who are your favourite IFK players, past and present?
Ian: Glenn Strömberg, Torbjörn Nilsson, Johnny Ekström, Håkan Mild, Ruben Svensson and many more! In today's squad; Robin Söder, Tobias Hysén, Stefan Selakovic and Joel Allanson.
Q: Who are IFK's main rivals? Do you have the same inter-city rivalry with the teams in Gothenburg such as we do in the U.K.?
﻿Ian: Our main rivals are actually the teams from Stockholm, AIK, Djurgårdens IF and Hammarby IF. At the moment we have three teams from Gothenburg in the top league (Allsvenskan) and now GAIS are the main rivals.
Q: You released the superb album "Diamonds In The Rough" which was originally another soundtrack, is this something you'd like to do more of in the future?
Ian: Absolutely, I would love to do more soundtracks.
Q: Finally, what do you have planned as your next project?
Ian: My next project is a documentary about the first hippie movement during the early 1900s in Switzerland, Monte Verità. Ida Hoffman, Otto Grosman and Isadora Duncan, to name a few. They were mainly rich intellectuals that wanted to be free from their strict way of life. Growing beards, no corsets, naked sun bathing, free love, becoming vegetarians. They later moved to California and called themselves "nature boys". Hopefully it will be out in cinemas Spring 2012.
I'll also start to record a proper solo album, the plan is to release it when we're done with the next TSOOL album/tour, so winter 2012.


Many thanks to Ian Person for his time and to Melissa Anselmi, Paul Slattery for contributing photographs.
Posted by Retro Man at 19:32