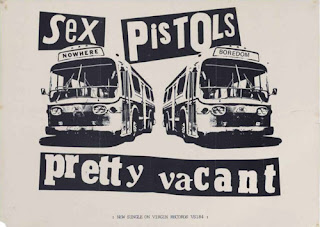 Blank Generation: A Collection of Original Punk Posters Exhibition 27th January – 8th March
198 Contemporary Arts Gallery, 198 Railton Road, London SE24 0JT Mon-Fri 11am-5pm
As an adolescent Gary Loveridge – music poster collector and punk historian - stole a Damned poster from the local record shop's sound proof listening booth. Then going to gigs in Bristol he would take down the record company display advertising the band's latest releases. On the way home Loveridge would rip down the fly posters and anything else he could get his hands on. This began a growing fragmented punk collage over his teenage bedroom wall, thus beginning Loveridge’s collection of music posters.
Moving to London in 1987 Loveridge discovered Bermondsey Antique Market, Portobello and Camden, providing him with a good hunting ground for expanding his collection of posters and other memorabilia. The collection has changed over time as music trends have changed with Loveridge collecting Britpop in the 90’s and bands such as the Libertines more recently. Numbering well over 100, some have been lost, destroyed, or sold, but despite this the collection remains a vibrant and authoritative representation of an important era in British popular music history. 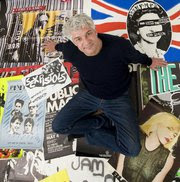 The Blank Generation exhibition at 198 Contemporary Arts & Learning presents a number of posters from Loveridge’s collection of music memorabilla. Alongside the exhibition there will be a series of events reflecting on 30 years of music and its associated art. The exhibition and events will consider an on-going punk movement and the relevance of punk in today’s creative and political climate. Blank Generation is also the inspiration for 198 and Central St Martins latest Creative Learning project. The group of young people from St Francis Xavier Sixth Form College in Clapham will be creating a new range of t-shirts influenced by the posters and the punk essence of youth, survival and the DIY aesthetic.  The t-shirts will be showcased and available to buy from Hustlebucks, 198@45, 5th Avenue, Brixton Village from Feb 23rd.
Good luck to Gary with the exhibition, I'll be sure to visit and post a report.
Posted by Retro Man at 23:48