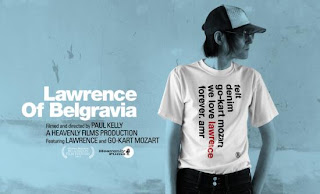 I recently attended the screening of Paul Kelly's excellent new documentary, Lawrence of Belgravia (Heavenly Films), at the Riverside Studios in Hammersmith. The film was immediately followed by a Q&A session with the Director and Lawrence himself. The documentary traces the trials and tribulations of ex-Felt and Denim singer Lawrence over an eight year period, as he tries to record a new album with his latest band Go-Kart Mozart. It's a refreshingly different music documentary, with Kelly steering away from many of the usual Rock movie cliches. The band's history is mainly told through recorded interviews with various journalists, most of whom are not really prepared for Lawrence's rather unconventional outlook on music and life in general.

He doesn't seem interested in modern technology such as computers, "there are too many wires", or mobile phones. This is apparent when he looks dumbfounded at one web-site journalist and asks, "you don't make any money from the internet? I knew it was crap, the internet..."  The darker episodes are not really tackled in any depth though, the camera skims over various eviction notices, letters of debt, medical forms and prescriptions, hinting at Lawrence's drug and mental health problems. Director Kelly excels at using the city of London as an impressive backdrop as he follows Lawrence, whether it be moving into and decorating a new apartment or helping to roadie for a young band. In one scene you discover that underneath all the bravado lurks a self deprecating humour. He's in a clothes store looking for a replacement for his ever present baseball cap and is persuaded to try on some different styles for a change. When trying on a particularly baggy flat cap he says it makes him look like John Lennon New York 1975 but then admits it's actually more like "Bill Oddie, Ecky-Thump 1972". 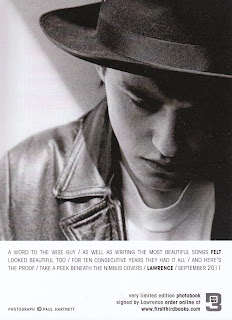 One thing that is apparent is that Lawrence is seemingly desperate for fame and fortune, longing for the day that he can afford a private jet or Limo and be free from having to travel on the tube with the general public. He moans about Bobby Gillespie not introducing him to Kate Moss, as she was sure to have wanted to marry him. It's these sort of pronouncements that go against the grain in the music scene. It's rare to hear a musician openly and unashamedly say he would gladly write a Eurovision song or love to have a famous supermarket chain adopt one of his tracks to be used in a commercial.

Also, like a lot of innovators, they can sometimes find themselves left behind in the wake of copyists and plunderers who can go on to more, often un-deserved, commercial and critical success. This has certainly been the case with Felt, coupled with a huge slice of plain old bad luck. Like many Alternative bands, Lawrence sent a Felt single to John Peel hoping to get played on his hugely influential radio show. John Peel never played it so Lawrence sent another one, and this time Peel did play it but also made a comment that it was the worst title for a record he'd ever heard. Stung by this reaction Lawrence sent a really nasty letter demanding that Peel should send the records back immediately, which he did. Lawrence admits that without Peel it cost Felt a lot of valuable publicity and support. The release of Denim's impossibly catchy pop single "Summer Smash", what could have been a sure fire hit, happened to coincide with the breaking news of the car crash that killed Princess Diana. Of course, the two were totally unrelated but that did not stop the song being quietly banned from any Radio play in case it was "deemed inappropriate".

I must admit there was something slightly surreal about watching a documentary when suddenly the subject himself appears on stage as the end credits roll! There followed an interesting and lively discussion with questions from the audience, I asked Lawrence how he felt about giving up so much control to Paul Kelly considering his somewhat controlling nature. He admitted that although he trusted Paul, it was difficult at first and he had to "draw up a mental contract" with himself "not to interfere". At the end I had a little chat to Lawrence and he asked me to remind Paul Slattery to send him some prints of his early Felt photographs (some of which you can see here). "I hope he hasn't lost my address, I wrote it on a piece of paper, I haven't got an email or anything like that". I was about to say he could see some of the photos on the Blog but thought better of it...!
﻿ 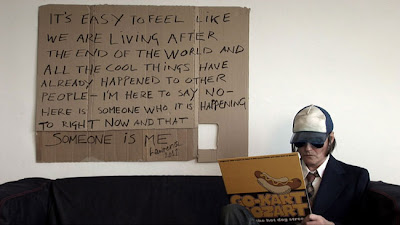 ﻿
You can still catch the movie before the run ends, tonight May 17th, at the Glasgow Grosvenor, tomorrow May 18th, at Edinburgh Cameo and finally May 21st at the Hackney Playhouse, London.
Check the Heavenly Films web-site for further information and details of tickets and timings.

First Third Books have published an excellent 176 page book about Felt, featuring more than 140 rare photographs from 20 different photographers, including our very own Paul Slattery, who took some of the very first shots of the band. It's a beautifully presented cloth-bound embossed hardback book, limited to 1,000 individually numbered copies all signed by Lawrence. There's also an extensive illustrated discography, an introduction by Bob Stanley of Saint Etienne and Lawrence's own annotations and quotes throughout. 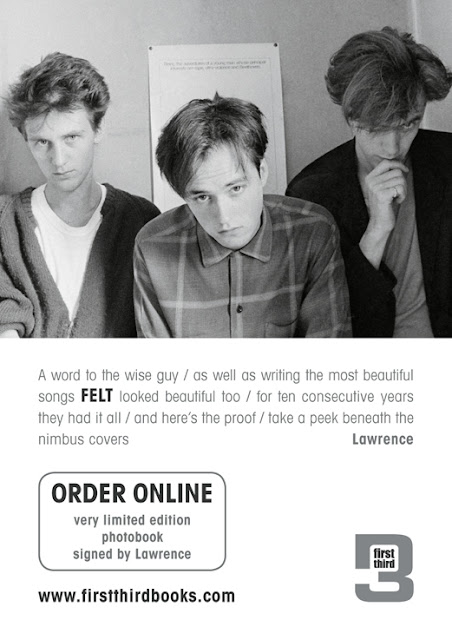 Many thanks to Paul Slattery for the exclusive photos of Felt and Lawrence.
Posted by Retro Man at 22:10