Autoramas, Brazil’s high octane Retro-futuristic Garage Rockers, are back with a brand new album entitled “Libido” and once again, they deliver on their promise to make ‘Rock Music To Dance To’ in their own inimitable style. From the shuddering opening guitar riff let loose from Gabriel Thomaz’s instantly recognisable Vibratorama effects pedal, this LP bursts forth from the speakers with a fizzing barely controlled energy. Now, I thought it might be difficult to top 2016’s excellent release “O Futuro Dos Autoramas” but top it they most certainly have. In fact, “Libido” is boldly staking a claim to be, not only the best Autoramas album to date, but also a benchmark by which all other albums released this year should be judged. They are still one of the best live acts I have ever seen, courtesy of the always mind-blowing Hipsville Weekender, and thankfully they have managed to capture that manic energy from their live performance in the album's sound perfectly.

The Sound
So, let’s hop aboard the Autoramas time travelling space ship and join Gabriel, fellow vocalist and guitarist Érika Martins, bassist Jairo Fajer and drummer Fábio Lima on their quest as they zoom through various musical eras and genres, swooping down at various intervals to plunder all the best bits of Rock music’s rich heritage. They cherry pick from 1950’s Rock’n’Roll, 60’s Surf and Garage Rock, 70’s Punk Rock, 80’s New Wave and 90’s Grunge and Indie before returning to their underground laboratory in São Paulo to create a bubbling simmering concoction crammed full of only the choicest ingredients. Devo, Link Wray, The B-52’s, The Rezillos, Pixies and the Sci-Fi theme tunes of Barry Gray such as Fireball XL5 and Stingray. With Gabriel at the production controls and mixing duties handled by Jim Diamond, Bernardo Pacheco and Luis Tissot and with the help of Zique - who has added Brian Eno style electronic beeps, buzzes and special effects - “Libido” is a magic potion brimming with chemical and psychotic reactions. There’s distortion, sinewy riffs, pounding drums, fuzzed up bass, vibrato guitars and bags of energy. This time round there is a 50/50 split in songs sung in English and Portuguese so it may well be the album to break the band through to a much wider International audience but, whatever the language, the album is full of instantly memorable songs packed with catchy choruses (didn’t they write a song about that once…) and wonderful backing vocal harmonies. Yes, I love Autoramas for many things but I’m especially impressed with their perfect sense of dynamics. You can feel that time and care has been taken with the track listing to ensure that “Libido” flows like a classic album should.

The Subject
From the moment you gaze at the excellent cover artwork by the Berlin based artist Julian Weber to the closing chords of the very last song, “Libido” takes you on a cinematic journey that is packed full of vivid imagery. Along the way, each song ignites sparks in your mind, causing your imagination to run riot. I’m already envisaging a spin-off to a Sci-Fi movie such as “1984” or “Total Recall” where our heroes, Autoramas, star as a gang of Day-Glo clad renegades trying to inject Neon bright positivity into the daily grind of a grey corporate obsessed world populated by faceless stressed out men. They take aim at hypocritical politicians who award themselves and each other with medals and trophies without actually doing anything to deserve such accolades. People in this world are only concerned with the here and now. Eyes down. Work Hard. Question Nothing. Autoramas however preach a somewhat chilled out Super Zen philosophy and they “don’t drive the same cars, wear the same clothes or speak the same words” as the sheep-like crowds who surround them. However, sinister forces spy on our intrepid heroes and shadow their every move like a ‘creepy echo’. The paranoia sets in and even the furniture becomes suspiciously scary. Are the sofas really taking on a life of their own? Are the chairs really going to trap them like “Tetsuo the Iron Man” and inflict some serious damage? However, Autoramas are plotting their escape – looking to the sky, to the stars and beyond, even into the future. Expanding into new worlds where they can meet again and realise their dreams. So, there you go, there’s the synopsis for the “Libido” screenplay and now we’ll just wait for Hollywood to call! Of course, Autoramas will be providing the soundtrack.

The Track-by-Track Guide
Opening track “Sofas, Armchairs & Chairs” kicks off with a stinging vibrato guitar riff courtesy of Gabriel’s very own trademarked Vibratorama effects pedal. It is driven along by some wicked Fuzz bass and powerful drumming. On the surface, it might seem like a mundane subject to write about but this edgy song with its jerky rhythms sheds a different light on the matter. Are those chairs out to get you? In fact, I feel a little bit unsafe sitting here listening to this, it feels as though I am going to be sucked into my chair! “Creepy Echo” is another sinister song that could be about CCTV surveillance or the theft of personal data. On the other hand it could be about a stalker or an obsessive fan or just about an intense sado-masochistic relationship. It is based around a sinewy riff with lyrics such as “I wanna lick your soul, you're trapped in my peephole. I wanna be your constrictive knots, I wanna call the shots, I wanna swallow you whole, you're always on patrol after me”. With “Stressed Out” they look on in thinly veiled disgust at the corporate world and its “stressed out short tempered men”. JJ Burnel from The Stranglers would be proud of the great bass fuzzing away beneath and the song ends with an excellent organ riff and a catchy “super Zen” mantra. “Homem Cliché” rides in on a wicked Surf guitar riff, tipping its hat to “Rock Lobster" by the B-52's. It takes a dig at macho posturing and capitalism “Look, here comes Cliché Man, Everyone likes him, not you. I do not wear those clothes, I do not speak those words, and I do not drive that car”. Next up, “Ding Dong” is a super-fast raucous punk song that sounds like it has been concocted by a mad scientist. It is fizzing and bubbling with electronic special effects and barely controlled feedback and is punctuated by feral screams. With the lyrics stripped down to the bare bones Ramones style, it is definitely the easiest to sing along to. Believe me you will be walking around for days after you hear this, happily singing “Ding Dong Ding Ding Dong” aloud. Just be prepared for some funny looks from passers-by. “Non-Practitioner” is an immense song that will surely go down as an Autoramas classic with its superb Kim Deal style backing vocals and thunderous riff. It’s a scathing attack on hypocrisy, fake news and publicity hungry politicians or celebrities all “fighting for the headlines”. It pours vitriol on the institutionalized backslapping of a “deep thinking elite” who “have all the badges but none of the deeds, got all the trophies but none of the feats”.

I think that “No Futuro” is one of my personal highlights of the album as a great Garage Rock riff powers it along and it features what could well be the best vocal performance by Erika to date. This song shows that Autoramas dream of escape, maybe even seeking out new worlds and civilisations and deep down they harbour a rather romantic vision. “I missed you when we had a tomorrow, one day we'll meet in the future”. Now, “Eu Sei Mas Eu Não Sei (I Know But I Don't Know)” might be familiar to fans of Blondie as Autoramas twist and turn this classic from “Parallel Lines” into much more than just another cover version. With Boy-Girl joint vocals in Portuguese, it licks its lascivious lips over lyrics such as “I'm your dog, but not your pet, can I be your toy?” Following this is “Coisa pra Caramba pra Fazer” which has Gabriel and Erika once again trading lead vocals and it buzzes around with a pent up energy that perfectly complements this barbed attack on a selfish executive trapped in a dog-eat-dog world. The main target of their vitriol has so many “projects and problems to solve” that they “don’t even have time to get sick” and they trample over everyone to climb that corporate ladder. “Get out of my way if you’ve got nothing important to say” this arrogant suit smugly announces as the guitars circle around like dive-bombers ready to inflict some well-deserved retribution. The album closes with “Para o Alto e Avante” which is a lovely classic pop song. But after all, Autoramas are not ashamed to tug at your heartstrings as the Pixies once did with “Here Comes Your Man”. This is an unabashed and uncynical ballad sung beautifully by Erika in Portuguese. In the lyrics, they “celebrate the miracle of aviation” and with some vivid imagery “open their wings over Brazil to occupy the blue sky”. A fitting way to end a remarkable album. 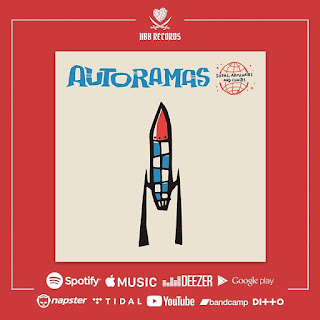 The band are releasing "Sofas, Armchairs & Chairs" as the first single from the album so please check out the Autoramas official web-site here or their Facebook page here for news and information and details on how to purchase the single and the "Libido" album. You can find out more about the excellent artwork of Julian Weber at his Facebook page here.