It has been a busy time in the convent as Ye Nuns, the premier all-girl tribute to The Monks, have two new releases out and available for sale right now. First of all, State Records have released a brand new 7" single on heavyweight vinyl “I Don’t Want To Do This Again”/”Don’t Worry” which is limited to 500 copies and it has a very special unique selling point…so let’s get the low down from the label itself…"State Records are very pleased to announce a new 45 from legendary Monks tribute act, Ye Nuns. These seven ladies have been blowing minds for a good few years now, with their spot-on renditions of classic tracks by Garage legends, The Monks, whose story is pretty well known now. Five American GI’s stationed in Germany formed a fairly typical beat band in the mid-60s before hooking up with some avant-garde existentialists who persuaded them to change their image, drop their repertoire and embark on a twisted journey into an originality that set them apart from every other band at the time. Stinging fuzz guitar, bass from hell, electric banjo, barked nonsensical lyrics - these guys were NOT messing around! Fast forward 40+ years and Ye Nuns picked up the baton with a mission to keep the fine work of The Monks alive and out there. Now, they've upped the ante again, recording two previously unreleased songs written by original Monks bass-player, Eddie Shaw. Both sides are deadly, sounding for all the world like “Black Monk Time” outtakes! The single comes packaged in a super cool double-sided fold-over card sleeve and is limited to 500 copies". You can order yours now from State Records at their Ebay store here. 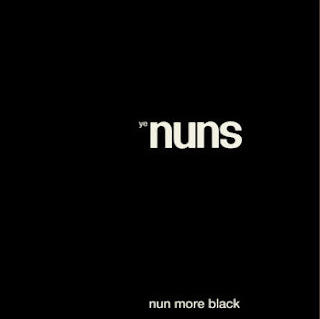 Next up, the Manchester based label Crocodile Records has just reissued Ye Nuns “Nun More Black” album on vinyl in a limited pressing of just 300 copies, so don’t hang around if you haven’t yet got a copy of this work of twisted Garage Psych genius. This reissue follows the original and now out-of-print 2014 release on Tuff Enough Records, which saw Ye Nuns faithfully reprise and update The Monks’ one and only official long-player (1966’s mind-blowing “Black Monk Time”) to a swathe of critical acclaim. It also received the seal of approval from fellow Monks fan, the much-missed Mark E Smith from The Fall, someone not known for dishing out praise lightly. Even The Monks’ original Bassist Eddie Shaw was suitably impressed and went on record to express his admiration for Ye Nuns album: “These songs have a personal significance to me and to see how someone else treats the material and expresses it, was a distinct pleasure and joy. I thoroughly enjoyed the album, it was fun – I laughed and pranced. It is such an honour to be able to have a part in this opera inside the cloister. Thank you, Ye Nuns!” You really can’t get a much higher recommendation than that so please head on over to the Crocodile Records store to order your copy here.

You can check out more of Jeff Pitcher's excellent photography at his Facebook page here.