Buzzcocks marked the 40th anniversary re-issues of the albums "A Different Kind of Tension" and "Singles Going Steady" with a special exhibition and pop-up shop at the Noho Showroom in London last Saturday. The one day only event featured Malcolm Garrett’s original artwork designs for Buzzcocks' record sleeves along with various prints, adverts and posters. There was also a shop selling the albums and the original "Product" carrier bag plus a very limited number of exclusive screen-prints of the original Malcolm Garrett "What Do I Get?" poster. To top it all we had the added bonus of a signing session where Steve Diggle was joined by the 'classic' line-up's rhythm section, John Maher and Steve Garvey who happily chatted with fans and signed albums and prints. Of course, seeing the three bandmates there together you couldn't help but feel extremely sad that Pete Shelley is no longer with us. However, the exhibition also served as a reminder for this Friday June 21st's very special event at The Royal Albert Hall to celebrate Pete's life and music.

Buddy Ascott, drummer with The Chords and now The Fallen Leaves, came along wth me and finally managed to get one of his biggest influences, John Maher, to sign the now legendary bass drum skin. John added his autograph alongside such drummimg icons as Clem Burke of Blondie, Nick Mason of Pink Floyd and Rick Buckler of The Jam among many others. The drum skin will eventually be auctioned in aid of the Roll Out The Barrel Trust charity which you can hear all about in our special Retrosonic Podcast interview with Buddy here. Buddy and I also pay tribute to Pete Shelley in Retrosonic Episode 33 where Buddy picks his favourite Buzzcocks song and talks about the influence of John Maher on his drumming. I also reminisce about the Buzzcocks 2012 "Back To Front" gig at Brixton Academy, which saw John and Steve Garvey joined by original vocalist Howard Devoto.

The Royal Albert Hall gig on Friday promises to be another very special, but of course poignant, one-off event and will feature Buzzcocks current line-up, along with Steve Garvey and John Maher and a star-studded cast of guest vocalists. The special guests confirmed so far include Dave Vanian, Captain Sensible, Thurston Moore, Peter Perrett, Richard Jobson, Pauline Murray and Tim Burgess. The impressive support on the night comes from The Skids and Penetration, making this a fitting tribute to Pete Shelley and a night not to be missed. Tickets are available from The Royal Albert Hall ticket office here. Here are a few photos of the exhibition and signing session. 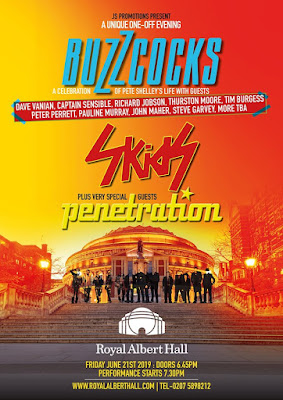 There are more photos of the exhibition at the Retro Man Blog Facebook page here.