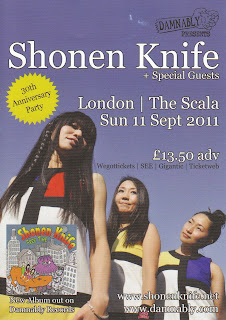 Well, it’s hard to believe that it’s been such a long time since I first saw Shonen Knife, almost twenty years in fact. It was back in 1992, at the Reading Festival, the band were on the bill at the invitation of headliners Nirvana. I enjoyed their set so much that I went along to see them at their own headline show at the Clapham Grand a few days later. Things have changed since then, I had some hair and a semblance of a waistline for a start, but even harder to believe than that was Sunday’s gig at the Scala was advertised as Shonen Knife’s 30th anniversary party.
Yes, it’s been 30 years since Naoko Yamano led the band, from their early Raincoats, Slits inspired recordings that would go on to make fans of Kurt Cobain, Sonic Youth, Sub-Pop Records and John Peel. Naoko hasn’t changed though, she looks amazing as the band take the stage, Shonen Knife scarves held aloft, soaking up the rapturous welcoming applause. The enthusiasm from the crowd packed in front of the stage makes for a superb atmosphere and as the band slam into "Konnichiwa", a cheerful welcome to the show and smiles break out all around.
"Twist Barbie" from their major breakthrough album "Let's Knife" is next and then "Perfect Freedom" a great track from the last album "Free Time".  Bassist Ritsuko Taneda has an amazing stage presence, a ball of energy with a huge smile that appears through her flailing hair. She reminds me of Jennifer Finch, the ultra-cool bassist from L7. "Map Master" and "Bear up Bison" are next, both keep the momentum up superbly.
Naoko has developed into a great charismatic front person, the crowd cheer mightily when she approaches the front of the stage to flick out her guitar riffs. My highlight of the night is the impossibly catchy "Capybara" from the last album, a jaunty Ska flavoured number with one of those choruses that gets lodged in your head for days. Excellent new drummer Emi Morimoto sings "I Am a Cat" and then it's into "Devil's House" on which Ritsuko takes the lead vocals.
"E.S.P." leads into the crowd favourite sing-along "Banana Chips" and then my favourite Shonen Knife track "Ride the Rocket". The set ends with two powerful rock-outs in "Economic Crisis" from "Free Time" and the classic "Cobra vs. Mongoose" and then it's over all too quickly.
The band return for a well deserved encore and storm through three tracks from their new “Osaka Ramones” tribute album. Each of the girls taking turns to sing lead vocals on cover versions of Ramones classics "Sheena Is a Punk Rocker", "The KKK Took My Baby Away" and a triumphant "Blitzkrieg Bop". There's a great reception from the crowd and the band look very happy as they finally leave the stage, but sadly it's all over.
It’s great to see that after 30 years Shonen Knife have not lost that wonderful sense of innocence and fun that makes them so appealing. Their knack of melding catchy harmony filled bubble-gum rock with hilarious lyrical subject matters such as the Japanese obsessions with cute animals and food is a winning formula. Long may they continue to cause outbreaks of intense happiness and huge smiles around the world!
The band have a great web-site and although most of it is in Japanese, there are tons of photos, tour diaries and blogs from each band member, it's well worth a look here. There is also a MySpace site in English here
﻿
Posted by Retro Man at 23:36