I was lucky enough to go to the launch night of the new "Punk & Beyond" exhibition curated by Gaye Advert, the iconic bassist with The Adverts. The Exhibition features artwork by various musicians, DJ's and artists involved in Punk Rock through the years and whilst, some pieces might be more a case of enthusiasm over natural artistic talent, the standard throughout is very high. Gaye Advert herself was also extremely pleasant and her superb artwork sold out in minutes, you can see why she deserves to be curating the Exhibition.

An unexpected highlight for me were Ray Gange's colourful and vibrant triology of quotes from Chinatown, Goodfellas and The Clash's "Clash City Rockers". Ray Gange was the star of The Clash movie "Rude Boy" which, along with Quadrophenia, pretty much informed my teenage years. Ray was in attendance and was extremely friendly, willing to talk about his experiences with The Clash as well as his artwork and DJing.
I had a nice chat to photographer Ray Stevenson too who was exhibiting some of his early Punk photographs such as a very early Adam & The Ants photo and a great portrait of Gaye Advert. Also there on the night were Grant Hart from Husker Du, Don Letts, photographer Jill Furmanovsky, author of '77 Sulphate Strip Barry Cain, Dave Collins from Podrophenia, Jenny from The Priscillas and Shanne Bradley from the Nipple Erectors amongst others.


I managed to talk to Billy Childish, who was also very pleasant and interesting about his fellow Medway-ites The Len Price 3 and Ranscombe studios. As I left the gallery I was dazzled by a cheerful bundle of energy with a bright shock of blonde hair and flourescent emblazoned outfit proclaiming Spizz Energi. Yes, the singer of one of my all time favourite post-punk songs "Where's Captain Kirk?", a classic single if ever there was one. Spizz was great fun posing for photos and it was a real pleasure to finally meet him. Other artwork on display included works by Sonic Youth's Thurston Moore, Robert Pollard from Guided By Voices who contributed three excellent pieces, Jamie Reid's classic "Rock & Roll Swindle" collage and one of my favourite pieces on the night, "Dog in Aldridge Road Villas" by The Clash's bassist Paul Simonon. I'd been to see an exhibition of Paul's Spain influenced artwork previously in a very posh Mayfair gallery so was already aware of his talents.

But it was those interesting surprises that were the real pleasure of the night, as I mentioned Ray Gange's artwork but also there was a really great wall mounted sculpture called "Mick Jones Guitar With Life Mask" by Alabama 3's Nick Reynolds and nice portraits of Poly Styrene by Chris Bell from The Briefs. The Exhibition was actually a fitting tribute to Poly Styrene who so tragically passed away earlier this year and there were some additional portraits of Poly by Knox and Charlie Harper as well as photographs by Ian Dickson. The news about Poly was made even sadder as she had just released a fanatasic new album "Generation Indigo" that was getting critical acclaim and putting her back in the fore-front of music again where she deserves to be.


It is also touching to think of Ari Up who also passed away at tragically young age at a time when she had also released a great new Slits album. It was nice to see both Ari and Poly  paid tribute to in the art and photography on display. Other notable exhibitors included Michael Davis from the MC5, Penny Rimbaud with some very striking pieces, Mark Mothersbaugh from Devo, Marco Pirroni from Adam & The Ants/The Wolfmen and Jowe Head from the Swell Maps. I would thoroughly recommend a visit to the gallery to catch the exhibition before it ends and sincerely hope that this becomes an even more regular event.

Here are some more of my photos from the launch night. 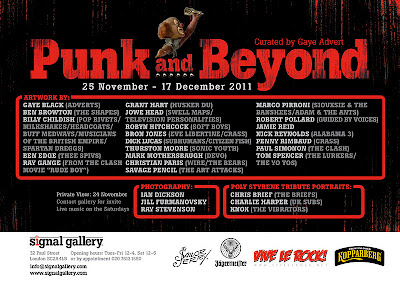 All Photos by Steve Worrall - Many thanks to Gaye Advert and Chris from Signal Gallery
Posted by Retro Man at 23:51