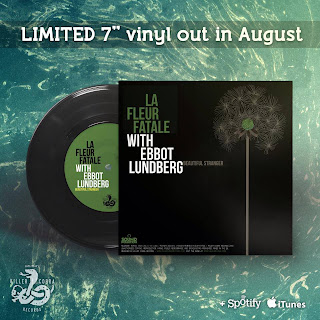 Swedish band La Fleur Fatale release a new single “Beautiful Stranger” featuring guest vocals by Ebbot Lundberg from The Soundtrack of Our Lives on August 16th. The single will be released on Killer Cobra Records digitally worldwide but also as a limited edition 7” vinyl of just 250 copies with “Beautiful Stranger” on one side and “How Long Is Too Long” on the other. The new single will be exclusively available for download before the release with the help from leading UK based music magazine Classic Rock, where they will offer it for free to their newsletter subscribers. The 7" vinyl can be pre-ordered through Sound Pollution Records. Here's a little teaser video clip...

The B-side “How Long Is Too Long” was written by Duncan Faure (Rabbit, Bay City Rollers) who the band met while shooting their documentary road trip "The Second Wave", which was shot in California last year. In Spring 2012 La Fleur Fatale embarked on an intense two week journey to and through California, when they played with legendary Psych musicians and met people who were part of making the 60's into what it later became, such as James Lowe (Electric Prunes), Patrick Campbell-Lyons (the original Nirvana), Mark Weitz (Strawberry Alarm Clock), Sal Valentino (Beau Brummels) and Karl Belknap (The Seeds). Throughout the movie they try to connect the past with the present, both musically and politically and ask what is the difference between then and now?

Since the release of their debut album in 2007, La Fleur Fatale have gone on to release another album and two digital EP’s, played live on national Swedish TV on Nyhetsmorgon on TV4 and the Swedish press have proclaimed that they are "The best kept musical secret we have got." They have also had their music in a major TV channel launch in Sweden (TV4 Sport) and reached over 200 million people in a variety of syncs (Discovery, Six Flags, American Airlines etc.) and toured the UK, US, Germany, The Netherlands, Sweden and Norway. The band have done a handful of shows with Ebbot Lundberg, one of which was recorded and aired on Sweden’s biggest station P3 in 2011.


Here's the trailer to the "The Second Wave" movie...check it out...


You can find out more about the band and the movie at La Fleur Fatale official web-site.