Mick Head does like to play gigs in unusual places. He's played in churches, venues threatened with closure such as The Florrie in Liverpool and even in cafés like Leaf on Bold Street and it’s these special one-off gigs that tend to mean more to fans than shows in run-of-the-mill music venues. A great example of this is tonight where he’s performing to a capacity crowd of just over 500 people in the stunningly beautiful neoclassical St. George’s Hall in Liverpool with his current project. After Shack decided to take a break Mick didn’t head off on the typical solo career but instead appeared with a new band, The Red Elastic Band to be precise. Mick explains that this is a cooperative of like-minded people with a fluid line-up that has indeed expanded since I last saw them play at the Islington Assembly Hall back in early 2016. Tonight there’s a choir, a grand piano and flute along with the trumpets and cello and the surroundings suit the lush orchestral arrangements of Mick’s music perfectly. Rather than just churn out the “greatest hits” Mick is taking the opportunity to revisit hidden gems and rarely played album tracks from all stages of his career, often reworking them with different arrangements or instrumentation. That’s not to say this is purely a nostalgia trip, far from it as The Red Elastic Band have already released one excellent E.P. “Artorius Revisited” and a 7” Single “Velvets in The Dark” and will release their debut album sometime in 2017. This new fluidity and open minded attitude makes going to Mick’s gigs nowadays unpredictable and exciting and it must also surely keep things as interesting for him and the band as it does for us, their audience.

However, despite this fresh approach, there are still reassuring nods to the past. Pale Fountains trumpet player Andy Diagram is a main stay in the Red Elastic Band and Pete Wilkinson, Mick’s bass playing side-kick from Shack, is a regular too. Unfortunately Pete doesn’t appear at the St. George’s Hall gig and his backing vocals and on-stage chemistry with Mick are missed a bit but they’ve drafted in an able replacement on the bass so the overall sound was not compromised. By the way, Pete has his own band, the excellent Aviator, who are well worth checking out. Mick looks remarkably fit and healthy these days, and is in particularly cheerful mood as he takes the stage. In between songs there’s lots of banter and in-jokes which is hardly surprising this being such a prestigious hometown show and the front row of seats are all reserved for friends and family. His daughter is in the best seat in the house, right in front of her dad and she must be his most enthusiastic fan too, getting up excitedly after one song to show him a framed black and white photo that someone had handed to her earlier. During gigs you often catch Mick off-guard with a huge grin on his face, totally caught up in the music around him and you can imagine if he weren’t singing he would be down at the front cheering on his own band! It’s moments like this and his lack of pretence that make Mick such a charming and inspirational performer.

The set-list is quite different to the Islington show where Mick delved deep into “The Magical World of The Strands” album but tonight that’s skipped completely and we are treated to an uplifting “I Know You Well” from Shack’s 1988 debut album “Zilch” as the opener and a choice selection of wonderful songs from the second album “Waterpistol”. In fact, a stripped back “Mood of The Morning” with Mick on acoustic guitar backed by some percussive bongos is one of the highlights of the evening. Mick is capable of writing some truly emotional and moving music that can bring a tear to the eye and a lump to the throat. It’s intelligent and involving songwriting with real depth and longevity, although a catchy melody is never allowed to stray too far away. Mick’s sister Joanne sings lead vocals on the beautifully haunting “Daniella” with Mick kneeling on the floor accompanying her with some impressive Flamenco guitar flourishes. More magical moments include the crowd singing along together on “Meant To Be” which sends a shiver down the spine and then there's the Psychedelic rush of “Streets of Kenny” which is simply mind-blowing tonight.

All these great songs are worked seamlessly into a set which also takes in “Newby Street” and “Cadiz” from “Artorius Revisited”, a cover of “Wild Mountain Thyme” and some new and unreleased material too. Mick ends the main set with “Comedy” one of the most perfect singles of any genre or any era and the upbeat “Newby Street” is so good it gets played again as the encore prompting people to finally get out of their seats to dance and show their appreciation. The Red Elastic Band will be releasing their debut album “Adios Señor Pussycat” on Violette Records in 2017 and talking of Violette, another thing Mick seems to have tightened up on since starting the Red Elastic Band is that old chestnut “artistic control”. It’s great that Mick has found kindred spirits in Matt who runs Violette Records, graphic designer Pascal Blua and photographer John Johnson, as all combine to make the Red Elastic Band releases, not just musically superb, but visually striking and very special indeed. In fact, everything from record covers to gig posters to badges, limited edition vinyl, postcard “box-sets” and T-shirts are all stunning and highly collectable. But reassuringly, and most importantly, among the new material are some songs that easily match Mick's most popular and well-loved classics, “Money”, “What’s The Difference?” and “Queen of All Saints” all sounded great and promise that “Adios Señor Pussycat” will be something quite special indeed. 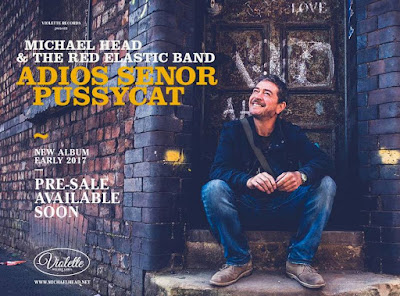 The review of Michael Head & The Red Elastic Band at The Islington Assembly Hall can be found in our Blog archive here. Violette Records is the exclusive home to Michael Head & The Red Elastic Band and you can check out their web-site here. Designer Pascal Blua’s excellent design work can be found at his own website here and the Liverpool based photographer John Johnson's stunning photos are here. The essential web-site and comprehensive Mick Head archive Shacknet is here. With thanks to Matt at Violette. More photographs of the gig can be found at the Retro Man Blog Facebook page here, please hit “Like” and “Get Notifications” if you are not already following.