Union Carbide Productions, The legendary Swedish Psych Punk band who would later morph into The Soundtrack of Our Lives, have recently announced two high profile reunion shows. A couple of weeks ago they played at Liseberg in Gothenburg and this Thursday September 6th they will perform at Gröna Lund in Stockholm. In the build up to this highly anticipated second gig, I caught up with frontman Ebbot Lundberg and asked him how the reunion came about.

Ebbot Lundberg: All because of the 30th anniversary release of the "Live at CBGB New York 1988" recording on vinyl for the first time. It’s only been available as a shitty bootleg before but we found the original tapes and remixed them just for fun. However, I think the reunion is more like a kind of mental redemption for us as old friends.”

Retro Man Blog: The reunion sees the return of most of the line-up that played the CBGB's show – yourself, Henrik Rylander, Adam Wladis and Patrik Caganis but there’s no sign of original guitarist Björn Olsson, his place is to be taken by Billy Cervin your current guitarist in The Indigo Children. Many fans would love to see Björn play again, was there no chance even if just for a guest appearance.

EL: Not by any chance. Björn stopped playing guitar a long time ago so he naturally declined. The only original guitarist is Patrik Caganis, who is in my opinion, the identity of UCP. There's nobody that sounds like him. It's like John Coltrane on guitar. He was and still is the Don Van Vliet/Syd Barrett persona of the group and without him; this reunion would have been totally meaningless.

RMB: Why is guitarist Ian Person not involved this time?

EL: Because he was not in the band when we did the CBGB’s show. He joined the group after the first two albums in late '89.

RMB: The original bass player Per Helm who played on the first two albums is in the current line-up but so is Adam Wladis who replaced Per and played at the CBGB's show. How is it going to work with two bassists?

EL: That works fine. It's very powerful. Like Nitzer Ebb.

RMB: Most of us in the U.K. only really discovered UCP much later on through TSOOL and by then of course it was too late, the band were already history. Why do you think you never made a mark over here in the U.K?

EL: We did play at The Marquee once in 1991 but that was a total disaster. Our sound engineer and tour manager were totally gone on bad acid and it was so loud that the audience left. Including the label that was checking us out. We never focused on England for some reason. I just remember in the late 80's there were a few English bands, like Thee Hypnotics and maybe Zodiac Mindwarp that were trying to do the same thing as us.

RMB: But you did make quite an impact in America. Kurt Cobain was a fan and Sub Pop were once interested in working with the band weren't they?

EL: Our Record label in Sweden (Radium) turned Sup Pop down for some reason in 1989. Instead, the first two albums were released on Skyclad and the rest is alternative history.

RMB: The CBGB's gig has since gone down in folklore, not just for some outrageous onstage behaviour but also for the Punk luminaries who were there to witness it including Sonic Youth, Foetus and Lydia Lunch. What do you remember about the show?

EL: Not very much. Except that I wore yellow underwear and a Harpo Marx wig during the concert. We came on very late because we'd just arrived from a gig in Boston we had with Bullet Lavolta the day before and I do remember that Jello Biafra was backstage in a trench coat looking very horny. Maybe some of us hung out with Jim Thirlwell and Lydia a little bit. However, I had lost interest in the so-called underground scene. I was just fascinated by the energy and sounds of New York and the Wall Street area at the time. It was like feeling the core of cancer slowly beating poison into the veins of the Earth.

RMB: You did return to the States in 1992 as Steve Albini from Big Black produced the final UCP album "Swing". I know you weren’t happy with the finished product; after all, you wrote "This Is Shit" on my copy…why didn't you like the album and what was it like working with Albini?

EL: You mean the rocket scientist wannabe who fucked up the Stooges? I think Steve was all right as an artist and human being but I was not a fan of Big Black or anything he'd done. However, I truly admire someone who has his own profile when it comes to sound. I was not especially thrilled because I've always been the main producer when making albums, which is basically the whole UCP and TSOOL catalogue up until now (though I seldom take the full credit for it). So I was against working with him to be honest. At that period, I was so fed up with the group that I just thought, “Well, let's go to Chicago and see what happens" but it did not solve any problems. Another stupid reason we went to Chicago was that our label was pushing us because they knew that Nirvana were going to record after us, which was ridiculous. The only fun with Steve Albini was sneaking into the studio library listening to the original tapes of Cheap Trick’s "Live at Budokan" at the Chicago Recording Company. We also played some live shows together with Jesus Lizard and Laibach at the Metro. After the whole trip, we just went back to Sweden and remixed the whole thing. The reason I thought "Swing" was shit was that it only came out as a CD at the time with too many songs and an indescribably ugly cover that was made behind our backs. However, I honestly think the newly released vinyl version is probably the best of all the UCP albums. It also has the original cover art which means a lot when you're making a record. So please go get it!”

RMB: Union Carbide Productions developed a more Psychedelic sound on their later albums and on songs such as "Golden Age", you can sense the link between UCP and what was to come next. Did this slight change of direction contribute to the break-up of the band and the formation of TSOOL?

EL: When Grunge arrived in the late 80's we kind of lost interest in our old sound and started to move towards more lysergic Rock 'n' Roll material which obviously later on led to the forming of TSOOL. The reason we decided to split was more on a personal level, we just fell apart like most bands do with that kind of energy. Although we were together for seven years, which is a pretty long time for such a band I think.

RMB: I know UCP often challenged conventions and up to this day, you have never played the corporate music industry game. I'm guessing this must have been detrimental to you commercially over the years, any regrets?

EL: I have no regrets whatsoever. In my opinion, life is to consciously apply mystery to everything and when you are born, you have a number so you're already part of the corporation in the bigger picture. However, to spread your music around the world you have to have some sort of organisation behind you. It's inevitable or at least it was before the TV-spiders came and created the internet. But to calculate a strategy to reach some gigantic level of fame or to be a bandwagon jumper is not my cup of tea. Music to me is about being spiritual and honest and to have fun. That's why I still get around with a pat on the head I think.

RMB: Has there been any creative spark working together again as UCP that might lead to writing and recording some new material?

EL: We're thinking about it but we just may not go to Chicago to record!

Ebbot Lundberg will return to London with his new band The Indigo Children for a show at The Half Moon Putney on Saturday October 13th. The "Live at CBGB’s New York 1988" album is available now from Bengans Records. You can hear a superb EXCLUSIVE unreleased track from the forthcoming Ebbot Lundberg & The Indigo Children album in Episode 32 of Retrosonic Podcast, which will be released later this week, along with music from Union Carbide Productions and Ian Person's new band Pablo Matisse. Keep an eye on the Blog or Soundcloud page for the release date or even better, subscribe for free at iTunes so you don't miss an episode. For the full uncensored story of Union Carbide Productions by Mike Stax I thoroughly recommended tracking down issue 16 of the superb Ugly Things magazine. All photos copyright Katarina Hansson. Thanks Katarina, please check out more of her excellent photography here. 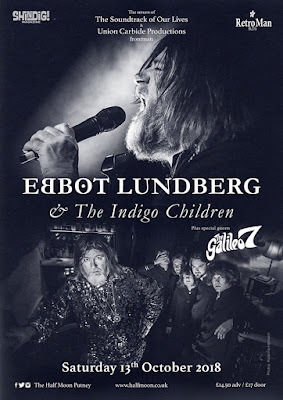 Tickets are available for Ebbot & The Indigo Children's London show on Saturday October 13th at The Half Moon Putney, expect a mixture of classic Union Carbide and Soundtrack of Our Lives songs along with plenty of new material. Special Guests on the night are The Galileo 7 who feature members of The Prisoners, The Baron Four and The Embrooks. You can book your tickets and get more information from the Half Moon by clicking here.