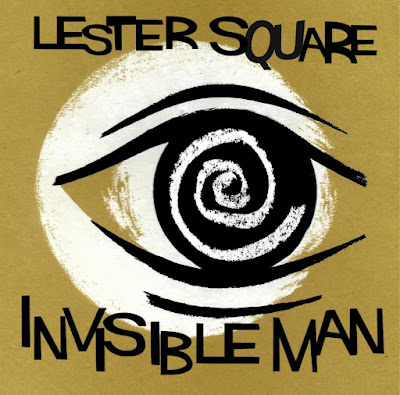 Lester Square, the original guitarist with Adam & The Ants and The Monochrome Set is back with another eclectic and thoroughly satisfying solo instrumental album called "Invisible Man" which could well be the soundtrack to an imaginary movie. First track "Who The Gods Destroy" sets the scene of what's to come perfectly. It's packed with buzzing analogue synth and keyboard sounds, tinny drum machines and all topped off by Lester's trademark twanging guitar riffs. I'm reminded of early Wall of Voodoo, who were originally a soundtrack/score composing collective before they added the vocal talents of Stan Ridgway. "Invisible Man's" evocative songs conjure up images of robots, old computer games and vintage Sci-Fi movies complete with spliced dialogue, swooping aircraft and special effects. The mix of styles flows effortlessly throughout the album, there's the pulsing 90's style Techno of "Disco Bizarro" and then we're on more familiar guitar-led territory with the excellent "Trudi French (Slight Return)". The shimmering, glacial wash of oriental synths in "Shinjuku" is reminiscent of Ryuichi Sakamoto's "Neo Geo" album and certainly brings the 24-hour neon-lit Bladerunner atmosphere of Tokyo's pleasure district to life. "Leaf" is a particular favourite and the crunching chords and jazzy guitar-riffing are reminiscent of The Monochrome Set, all underpinned by some nice Arabic percussion. Lester brings things down to Earth with the bumpy crash-landing of "COP26" which is shot through with chilling sound-bites regarding the failure of the powers-that-be to tackle the effects of climate change and suddenly the outer-space of "Invisible Man" seems quite appealing. The mood is lightened by an unexpected bonus track to end with, a version of John Barry's stirring "Zulu" theme however, Lester has subverted the genre and relocated the action from Rorke's Drift to the Wild West with an uptempo Ventures style Spaghetti Western romp. Lester plays all instruments and has written all the tracks except "Zulu" which was composed by John Barry. "Invisible Man" was recorded at Liberal Elite Studios in Islington and will be available in February from Lester's Bandcamp page. You'll be able to hear a track from the album in our forthcoming episode of Retrosonic Podcast so please subscribe at Spotify, iTunes, Amazon Music, SoundCloud or Apple Podcasts to ensure you don't miss out.
"Invisible Man, his 5th solo album, sees Lester move to a more cinematic arena. Employing synthesised sound and sampled aural collage, he reels in the reels, brings Sci-Fi to the Hi-Fi, terror to the turn table, romance to the dance floor... and a re-look at some old favourites. The whole is rounded off with a more serious look at science fact, a reaction to the failure of COP26 as well as a 'live' bonus track! So, expect phasers set to stun and more ear worms than you can shake a stick at. Pop some corn, put the headphones on and settle down to an instrumental blockbuster: from Sulu to Zulu, a Saturday matinee of movie mayhem and mirth with a sobering twist. Schlock & Roll!"
"Lester Square's guitar style influenced The Smiths, the Glasgow and Edinburgh Post Punk scenes, and then their successors, Franz Ferdinand." - Ian Bourne, Gig Soup

Email ThisBlogThis!Share to TwitterShare to FacebookShare to Pinterest
Labels: Adam and The Ants, Lester Square, The Monochrome Set