The Price "No Justice?" New Compilation & Launch Event at Sounds Of The Suburbs Records Ruislip on March 20th. 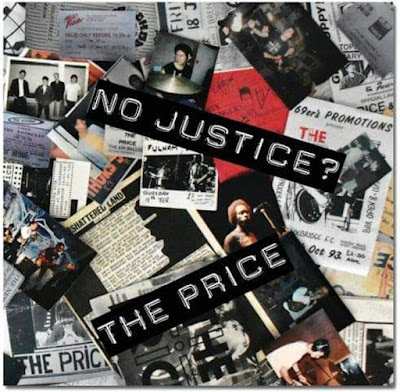 33 1/3 years after they released their first single, The Price release their debut album "No Justice?" on Cadiz Records featuring nineteen studio recordings from 1988-1993. The Price played hundreds of shows during this time, including support slots to Transvision Vamp, Carter The Unstoppable Sex Machine, The Lords Of The New Church, Wilko Johnson, Mega City Four, Senseless Things, John Otway and many more, as well as sharing the stage with contemporaries like Red Letter Day, The Newtown Neurotics, The Chairs, Action Pact, TV Smith’s Cheap, Who Moved The Ground?, The Shout and Porky The Poet (now better known as Phil Jupitus) among others. They also toured the UK with The Lurkers and were one of the few bands to play in East Germany (including gigging in Leipzig and East Berlin and a recording session in Halle as well as supporting Half Japanese in Magdeburg and Cottbus) before The Wall came down. The band appeared on a compilation album with The Manic Street Preachers (who they were booked to support but who got too big for the gig!) and their two 7” singles 'The Price You Pay' / 'The Man With The Smile' and 'So What About Love?' / Between The Lies' were both Single Of The Week in The NME and Sounds magazines. BBC radio presenter Steve Lamacq was an early champion of the band, and ex-Ruts guitarist Paul Fox produced their second single ‘So What About Love?’ They also went on to work with famed and fabled producer Pip Williams who also produced Status Quo, Dr. Feelgood and more. Although the band released a six-track mini-album ‘The Table Of Uncles’ in 1990 they were never able to release a full-length LP at the time, so this release collects together many of their best-loved songs in a long overdue overview of their career. Price guitarist Leigh Heggarty now plays in Ruts D.C., and has also worked with Henry Rollins, Alvin Gibbs & The Disobedient Servants, Wayne Kramer, T. V. Smith, Department S and many more. Leigh explains further...

"One day in the dim and distant past, I received a cassette of The Price in the post. Way back in those pre-internet days one of the main ways you got your music to promoters, journalists, indeed anybody who might be interested in what you were doing, was to send them a tape. Most of them disappeared forever, but this one had been sent back to me in the stamped addressed envelope that I invariably included in the package along with a plea to send the tape back if they didn't like what they heard so that we could use it again. This was an unusual occurrence, which is probably why it's stuck in my mind. The accompanying note said that the music was interesting, but that we needed to think more about our melody lines; also we should look at making the arrangements more commercial - maybe by listening to the sort of things that were getting into the charts at the moment - and while we were doing that, perhaps think about the sounds on those records, especially on the drums. Oh and we should always include at least one photograph of the band so that people could see what sort of image we had. Needless to say we did none of those things.

It's interesting to speculate on what might have happened if we had taken even any of those points to task...Would we now be thinking about reforming for yet another money-spinning World Tour to coincide with the latest box set reissue of our illustrious back catalogue? Would we all be in poverty-ridden obscurity, bitter and twisted at the way that our music has been sold and resold by a ruthless music industry without any of us ever seeing a penny for it? Would we be somewhere between the two? And if so which would we be nearer to? These are obviously all rhetorical questions, as we were far too naive to have even considered considering any of it. Well, I certainly was anyway. 'No Justice?' collects together 19 tracks recorded between 1988 and 1993 - here are some of my memories from that time". Leigh Heggarty January 2022 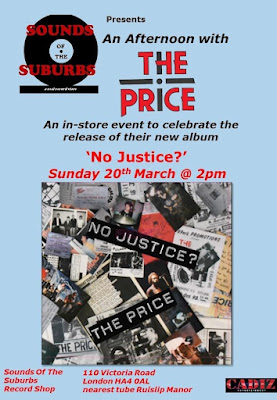 The excellent Sounds of The Suburbs Records in Ruislip will be hosting a free in-store live show from The Price to celebrate the release of "No Justice?" on Sunday March 20th at 2pm and you'll be able to buy the album on the day too. Please check out the event page here for more details. If you can't make it you can order the album from Cadiz here. Leigh Heggarty has his very own Blog "Leigh's Mad World of Guitars" and you can also check out our thoroughly entertaining Retrosonic Podcast special episode with Leigh. if you search and subscribe at Spotify, iTunes, Apple Podcasts, Amazon Music or Mixcloud or you can listen/download directly from SoundCloud below: