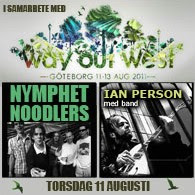 Nymphet Noodlers play a reunion gig at Sticky Fingers in Gothenburg on Thursday August 11th along with a solo performance from Ian Person, The Soundtrack of Our Lives/Diamonds In The Rough guitarist and songwriter. 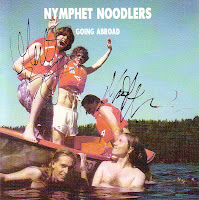 The Noodlers were formed in Karlstad in the early '90s and went on to release just one album "Going Abroad", produced by Ebbot Lundberg, in 1994 before splitting up a couple of years later. Thinking about it now they have become what can only be described as a Swedish Super Group but "in reverse".
In other words, when the band split, each member leaving was to have a big influence on Swedish music, and the family tree that has sprung from the Noodlers is impressive to say the least. I can only cover some of the branches here, follow carefully...

To start off with, when Union Carbide Productions split, Ebbot, Ian and Björn Olsson formed The Soundtrack of Our Lives and took Martin Hederos as their new keyboard player. Mattias Bärjed was to join TSOOL later on when guitarist Björn left.  Jan Martens released a fantastic album with Jesper Karlsson as "Jan Martens Frustration", which includes one of my favourite tracks (and bass-lines) "Pole Position", it's well worth tracking down. Jesper drums with Stonesy glam rockers Thunder Express (Dundertåget) with Robert Dahlqvist from The Hellacopters. Then additionally, Jan also plays in heavy riffing rock outfit Free Fall, with Mattias Bärjed. 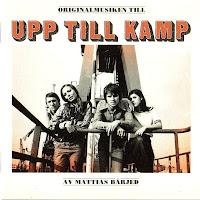 Bärjed also composed the soundtrack, and starred in, the acclaimed TV drama "Upp Till Kamp". The music has been released on CD and features some authentic period piece '60's and '70's style tracks and incidental acoustic music. It also boasts the heart-breakingly beautiful song "Coming Down Cold" with vocals by Ebbot Lundberg. Martin Hederos teamed up with Mattias Hellberg for the "Hederos and Hellberg" side-project of stripped down piano and acoustic cover versions of tracks by bands such as The Stooges, Love and Velvet Underground. Martin also worked with Nina Ramsby and is now playing in prog/jazz band Tonbruket featuring Dan Berglund (ex-E.S.T.). 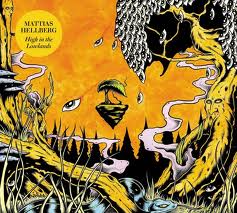 Mattias Hellberg is, in my opinion, one of the best singers in Sweden, and amongst his many collaborations one of my personal highlights include his superb self-titled solo album from 2004. He also put out a great and groovy psychedelic album as The White Moose, "Out Of The Frying Pan Into The Woods" which I would thoroughly recommend. Hellberg has also worked with Nationalteatern and with Rock 'n' Soul outfit The Solution with Scott Morgan (Sonic's Rendezvous Band) and Nick Royale (The Hellacopters). He has just released a new solo album "High In The Lowlands" out now on German label Devil Duck Records.
So you can see what I mean about how the Nymphet Noodlers ended up becoming a "Super Group", and there are far more collaborations, links and branches that I have missed out due to space limitations! 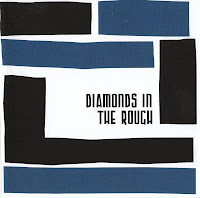 Then to cap it all, on August 11th, Ian Person will make a rare solo appearance. Ian made his name as a fantastic guitarist alongside Ebbot Lundberg in Union Carbide Productions and was a founder member of The Soundtrack of Our Lives. He previously released an excellent album under the name "Diamonds In The Rough" in 2006 full of eclectic songs and instrumentals. He has just composed the soundtrack music to the new documentary movie "Fotbollens Sista Proletärer" about IFK Göteborg's European footballing adventures back in the '80's (to be reviewed here soon).

So this could one unbelievable night, a gig featuring some of the best Swedish musical talent from the past, present and I'm sure well into the future!
Posted by Retro Man at 23:45