How to join your favourite band...Billy Cervin and The Soundtrack of Our Lives

"This is an emergency...is there a bassist in the audience who just happens to know all the songs..!?" I fight my way to the front of the stage, hands raised, screamimg "Me, I do!" the bouncers lift me up over the crash barrier and up onto the stage. The band nods encouragement and I strap on the bass, plug in the lead - and we're away...! OK, it's a fantasy of course, but I wonder how many music fans must have had a similar day dream? Not many fans will ever get near their favourite band let alone have a chance to play a real gig with them. But this was exactly what happened to Billy Cervin when he got the chance to cover for The Soundtrack of Our Lives guitarist Mattias Bärjed at a big concert as part of Gothenburg Kulturkalaset (Cultural Festival) in August this year.

Q: How did you first get to know about The Soundtrack of Our Lives?
Billy: Well, I guess I've listened to them through my parents since the release of their first album in '96, but I didn't really discover them until I first heard the single "Bigtime" in 2004, it totally blew me away and it was the song that inspired me to pick up a guitar.

Q: How old are you now?
Billy: I'm 18 years old and I'm not getting any younger so I thought I'd get started early...

Q: How did you get the opportunity to play with the band?
Billy: It's a long story! In 2005 I lived in a small town outside of Stockholm called Vaxholm. Now, in the 70's and the 80's Vaxholm was known as a town full of music and culture, but sometime in the 1990's something must have gone terribly wrong because that is not the Vaxholm I know. Nowadays I don't think anyone there has even heard of bands like The Who or The Kinks, it was like that world didn't even exist. That's why I was really surprised when, in the summer of 2005, I saw a certain guitar player walk across the street. It was of course Mattias Bärjed, from The Soundtrack of Our Lives, who had moved there for some reason. I was 11 years old and had been a huge fan of their album "Origin Vol. 1" for about a year, I talked to him a couple of times and got his phone number and he was very helpful and gave me lots of advice. So that's where it all began. Plus, I had a MySpace page where me and my good friend August uploaded our songs and I think Mattias showed that page to the rest of TSOOL so that's where they heard about me for the first time.

Then some years passed and I started to play in my current band, Side Effects, and Mattias came to watch a couple of shows in 2010 which led to us opening for TSOOL in December that year. After that, we played a couple of gigs with the band's singer Ebbot and we were really honored to get to be around them. Then for some reason, in July 2011 my phone rang, and it was Mattias, he asked me if I would like to be a stand-in for him and play guitar at a big TSOOL gig in Gothenburg, and I said "yes!".

Q: How long did you rehearse for the show?
Billy: I rehearsed on my own for about 4 weeks, just sitting with an acoustic guitar and playing along to the albums, and then Mattias showed up now and then to help me with the parts I had problems with. But the fun thing is that I didn't actually rehearse with the band until the same day as the gig...But it worked out just fine...

Q: What was the experience like of being on stage with TSOOL?
Billy: Fantastic and quite bizarre. I remember walking out and just sound-checking my guitar, like 30 minutes before the gig and it was a huge stage for me and there were already a lot of people there, maybe 1000. Then I started to get nervous so I ran up into the dressing room and drank about 4 litres of water. Later on, when we walked up the stairs and onto the stage it felt like I'd been punched in the chest, there was about 10,000 people there and I couldn't believe how big it was.

Q: Will you be playing any more gigs with TSOOL in the future?
Billy: I hope so! If they ever need a stand-in again I will always be available!


Q: Please tell us a bit about your band Side Effects.
Billy: Well we were formed in 2009 and started off playing some kind of pop, we sounded like Mando Diao, then we moved on to find our own sound, more influenced by bands like The Who, Pink Floyd (Syd-era), Brian Jonestown Massacre, Love etc. We recently released our debut E.P. called "Feel Flows" and at the moment we are writing new songs and rehearsing for our upcoming gigs in Sweden.

Many thanks to Billy for his time and for contributing the photos, you can check out his great band Side Effects, listen to some songs and buy their debut E.P. by clicking here. 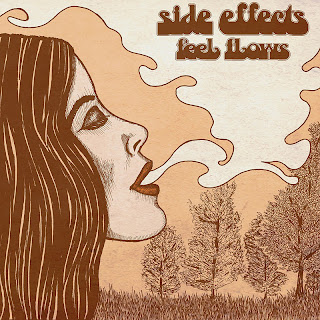 Email ThisBlogThis!Share to TwitterShare to FacebookShare to Pinterest
Labels: Ebbot Lundberg, Side Effects, Sweden, The Soundtrack of Our Lives