Lester Square, the original guitarist in Adam & The Ants and co-founder of The Monochrome Set has just released a new solo album entitled "Carcass". The title track features Lester's trademark twanging riffs that will of course be familiar to fans of The Monochrome Set. It's a great opener, like Dick Dale or Link Wray performing the soundtrack to an Ennio Morricone Spaghetti Western movie. Another personal highlight is "Time Flies" which is a beautifully pastoral song with vocals from The Chefs' Helen McCookerybook that reminds me of Goldfrapp's "Seventh Tree" album and it wouldn't have been out of place on the soundtrack to "The Wicker Man". Although by the end the peaceful landscape seems to get shattered and polluted by the sound of screaming fighter jets. The rest of the album features a diverse set of evocative and mainly instrumental songs that range from pulsing funky brass to baroque orchestral pieces. There's even some Gaelic Pipe Folk rubbing shoulders with organ driven tracks that touch on The Senior Service or James Taylor Quartet's output. But of course it's Lester's instantly recognisable and inventive, yet still seriously underrated, guitar work that is the star of the show. As well as recording eleven studio albums with The Monochrome Set, Lester has also recorded with The Invisible, Jesus Couldn’t Drum, ...And The Native Hipsters, Victory Through Sound and Helen McCookerybook. The official description of the album goes something like this: "Carcass, is a product of its times; a collection, if you will, of protest instrumentals; sound poems to chart these extraordinary times. Whether imagining the insect winners of a post nuclear winter, or the secrets of the Trump penthouse, these works are in equal measure poignant, sarcastic, angry and hopeful. It has been said that revolution today has no soundtrack in the same way that the anti-Vietnam draft resistance of the sixties did. For what its worth the redress starts here". You can order the CD of "Carcass" from Lester's Bandcamp page here. 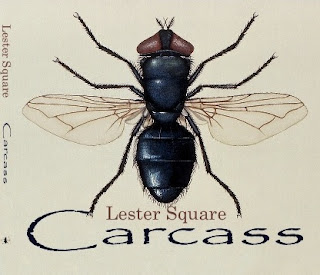 Lester will be re-joining The Monochrome Set for two very special gigs at The Lexington in Islington to celebrate 40 years since The Monochrome Set formed. The band will be playing their first two albums "Strange Boutique" and "Love Zombies" in their entirety and a set of favourites, over two nights, Saturday 10th February and Sunday 11th February next year. The gig is being promoted by Bizarro and support on both nights comes from The Would-Be-Goods Two who feature Jessica Griffin and Peter Momtchiloff of the original WBG's playing a stripped down set of songs old and new. You can order tickets in advance from We Got Tickets here. There's no news yet if Lester will be playing any solo gigs to promote the release of "Carcass" but in the meantime here's the title track.

Lester Square photo copyright Paul Slattery. You can see a feature, including more of Paul's excellent photos of our Retro Man Blog Night featuring The Monochrome Set and The Fallen Leaves back in May 2014 at the Retro Man Blog archive here.

Email ThisBlogThis!Share to TwitterShare to FacebookShare to Pinterest
Labels: Adam and The Ants, Lester Square, Post-Punk, The Monochrome Set, The Would Be Goods