Monica and The Explosion - A Swedish singer and a U.K. Sub!

Monica and The Explosion is a two-piece band consisting of Monica Welander, a Swedish punk rock singer-songwriter and bassist Paul Slack (original member of the U.K. Subs and The Flying Padovanis). In July 2010 Monica released her second album “SHUT UP!" on Hands Up Music, recorded at Jigsaw Studios and featuring Paul on bass and Rob Bayliss on drums. They have toured in Europe, Ireland, Sweden and Australia as well as gigging extensively around the U.K. Having toured around the world as a solo artist for a couple of years, Monica finds the two-piece line-up retains the original concept of the songs whilst adding a new layer of complexity to the over-all sound which is best described as ”Jukebox Punk". 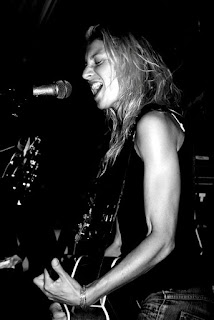 Although primarily a two-piece they can sometimes be seen performing with drummer JP Morer, but whatever the line-up the songs are always delivered with a heartfelt passion that has won them fans wherever they’ve played. Monica and The Explosion started in 2005 when Monica left her old band "Lots of Pilots" to focus on writing and performing solo. Her music was described as punky rock with a lot of energy. The debut album "Monica and The Explosion" was released in 2007 on her own label, backed by Peppe Risenberg on drums and David Persson on bass. The three of them played together in Sweden for a while before Monica went touring on her own. The unusual girl playing energetic punk rock on her acoustic guitar awoke interest all around the world. In 2008-2010 she went on solo tours around Europe, India, Australia, New Zealand, and The U.S. Two music videos were released from the debut album: "Hollywood" and "Friday Night", both produced by Daniel Larsson.

Jane Connolly in SO Tunbridge Wells
"Female singers seem to be taking over the world right now, but if you want a break from the power ballads and quirky pop tracks, do not miss this feisty local musician. Strongly flavoured with classic British punk, Monica Welander - a Swede now based in Tunbridge Wells - is not so much a breath of fresh air, as a force-10 gale of honest, funny lyrics and insanely catchy tunes. She doesn't mince her words, with tracks like "Intoxicated" summing up a Saturday night romance in blunt and witty style, while the opener "Take it Or Leave Me" has toes tapping from the very first bar." 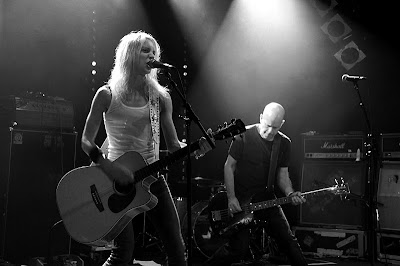 Michael Bednar in Big Cheese Review
"Sassy Swede + Paul Slack + Acoustic Punk = Jolly good time.
Acoustic punk? From Sweden? With the bassist of punk rock legends U.K. Subs? It may sound like a gimmick, but one listen to the album and any of those notions are soon dispelled.
Monica Welander is the front-woman of this three-piece band, and she’s got enough sass to pull the album together. Songs like “Take It Or Leave Me” and “Shut Up” are fiery musings with a little bit of Joan Jett attitude thrown in. The album might be a little rough at the edges but that only adds to it’s charm. Let it explode out of your stereo and enjoy!" 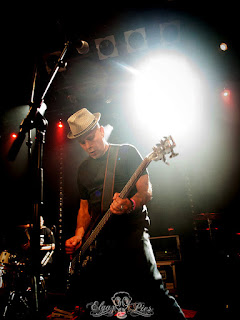 Paul Slack also writes a really great Tour Blog which is hosted on the superb U.K. Subs Time and Matter web-site. The Blog is a life-on-the-road tour diary that also doubles as a very interesting travelogue. Paul shares his photos, thoughts and comments on the various venues, bands and characters that they encounter along the way. However, what really appeals to me is the great insight Paul gives to the many Towns and Cities that the band travel through, places that are often totally overlooked in the average "coach-gig-backstage" tour diary. Paul really wants to discover  more about the local history and culture as they tour - Nantes, Mont St. Michel, Hamburg, Amsterdam, all are brought to life with some great photos and descriptions.
Monica and The Explosion have two confirmed dates already for 2012 in January at The Iron Duke in Brighton on the 21st and The Castle in Sheerness, Kent on the 28th. However I would recommend you keep a regular check on their Gig Listing page, as this number is likely to grow quite a lot - in 2011 they played around 100 gigs from the U.K. and Ireland, France, Holland, Germany and Sweden and all the way to Australia!
Photos courtesy of Paul Slack