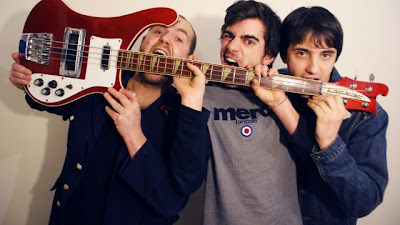 Fuzzy Vox, the Paris based trio, have just released a rather splendid new E.P. called "Technicolour" on vinyl and download. It's a really impressive record, positively bursting with an energy that sometimes veers into Hives territory, particularly on the one and a half minute Garage Rock blast of "Same Old Story". The title track "Technicolour" is a catchy, sinewy number that packs a real punch. Lead vocalist Hugo is a mean guitar player too and on "I'll Be Gone" he slams out some great riffs while his rhythm section colleagues, Nico on drums and bassist Gregoire, keep a tight Rock 'n' Roll grip on proceedings. "Hurricane" is a Bluesy stomp with a great call-and-response chorus and a quick-fire Who-style drum break that stops for a little mini-My Generation bass riff. The E.P. ends with a punky version of "Great Balls of Fire" which I can imagine being a live favourite at their shows. In fact from what I have seen of the band in gig photos and YouTube videos, they look like a really exciting live act. The band cram in a wide range of influences in their short songs from classic Rock 'n' Roll to Power Pop and Sixties style Garage Rock - but they also have a cool touch of Soul that reminds me of some of Little Barrie's better material. Fuzzy Vox have some gigs lined up in France including a show supporting Garage Surf legends The Barracudas in Paris on October 11th. Check out the band's official Facebook page for more details on dates, venues and tickets. 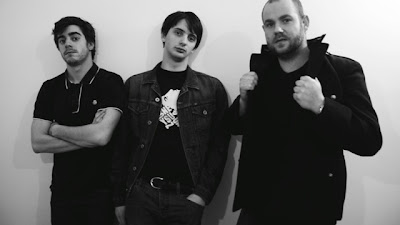 You can purchase the "Technicolour" E.P. from the Fuzzy Vox Bandcamp site, in the meantime here's the great video for "Technicolour" check it out here...

Thanks to Hugo for the photos.