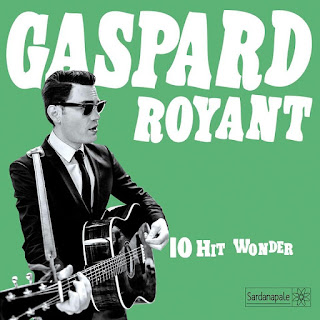 Calling your debut album “Ten Hit Wonder” might well appear to be a bit presumptuous, arrogant even, but from what I have seen and heard of the French Singer Songwriter Gaspard Royant he doesn’t seem to be lacking in confidence. He certainly has the style and the classically cool look of someone who could appear in an episode of “Mad Men” and not need any makeover or costume change. Anyway, I suppose if he had called the album “Ten Songs That Are Strong Enough To Be Released As Stand Alone Singles In Their Own Right And In An Ideal World Might Well Be Hits” it might well be more self-effacing but probably a little bit too long winded to be practical. However, that’s what the album is; it’s a compilation of songs that have previously been released as 7” vinyl singles and all are extremely well written, timeless retro Pop Soul tracks that would slot into any mainstream radio show’s play-list perfectly. Although he is French, you wouldn’t know it from listening to the album as there is an undoubted 1950’s and 60’s American Rock ‘n’ Roll, Doo Wop and Motown influence on the sound. With his impressively rich crooning voice the overall sound is certainly more Chris Isaak and Roy Orbison than Jacques Dutronc or Serge Gainsbourg.


My favourite two tracks are ironically the two which are interesting diversions from the main thrust of the album, mainly the superb “Marty McFly” which is veering into Power Pop territory and strangely enough conjures up the melodic Liverpool sound of The La’s. The opening track “Back To Where We Aim” reminds me of Aztec Camera and Roddy Frame’s solo work with it's nice acoustic undercurrent. But overall the emphasis here is on pounding Motown beats with horns galore and a finger-snapping “Heatwave” style swing. I have to say that I’m really enjoying the album as a cheerful no-nonsense slice of easy-listening Rock ‘n’ Soul. There’s no doubting these sassy, swinging songs herald a bright future for Gaspard Royant and he might well get those ten hits after all.

With thanks to David Barat. For up to date information on tour dates and how to buy the album then please check out the Gaspard Royant official web-site here.