The Past Tense: New Album "Heads Held High" Out Now... 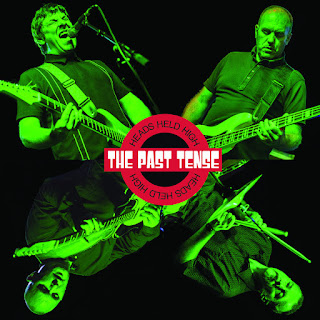 It's been a very busy time for The Past Tense, not content with releasing an outstanding album of brand new material entitled "Heads Held High", they have also put out "Six Live Special", a mini-album comprising six classic tracks brilliantly recorded by Steven Tagg-Randall at our own Retro Man Blog Night at The Half Moon Putney last September. Talking of The Half Moon, the band played a blinding set at the Fruits de Mer and Mega DoDo Records "Games in May" event, where they had yet another record up for grabs, this time "What's The Past Tense of Pipe", a collection of old tracks from their previous incarnation, Pipe, along with early Past Tense demos. The gig at "Games In May", which also featured enjoyable sets from Mark & The Clouds and Crystal Jacqueline & The Honey Pot, was undoubtedly the best performance I have seen from the band, and I've seen a few over the years! New(ish) recruit Buzz (for he was actually previously in Pipe...) is fully embedded in the band and he now plays organ as well as lead guitar. Actually, this was the first time for me to see the band play with the addition of keyboards and I must say it works a treat.

So, onto the new album "Heads Held High" and it really is a cracker, much more diverse than their two previous official releases "Pick 'n' Mix" and "Take Three", it highlights the band's different musical backgrounds and interests perfectly. The Past Tense take great pride in what they put out and this is no exception - the album has great cover art and an insert with background notes on each song, which us music fans just love don't we...! The band do everything themselves and they do it very well, I'm thinking in particular of their last official release "Remember The Days", the split 7" single with their mates The Loop, which was issued on different coloured vinyl, it was a real work of art. "Heads Held High" kicks off with "Top Of The World", which could well be the best song the band have written so far. It has a great chorus and melodic verses that I can imagine Pete Shelley would have been proud to have written. There's also a cheeky little nod to The Stranglers in there too, which makes it even better in my book! "Throwing It All Away" sees Andy's vocals on top form, seething with disgust at the current political climate. "Vision From Another World" has some groovy organ bubbling away underneath and is one of those superb little Garage Rock nuggets that The Past Tense excel in like their early live favorites such as "Wolfman" and "My Baby".

The next two tracks are to me pivotal in the band's progression and point to a very bright future. Rather like Thee Spivs did on their third album "The Crowds and The Sounds", The Past Tense are also throwing off the somewhat limited Mod Revival/Garage Rock shackles and, whilst not losing touch with their roots, they are really stretching their sound and showing a real maturity in their song-writing. "Won't Miss Next Time" is one of the stand-out tracks on the album, it starts off with acoustic strumming before exploding into an emotional piece featuring some superb guitar work. Strangely enough it kind of reminds me of Dinosaur Jr. or Buffalo Tom which is certainly a new reference point. Next up is the brilliant "Crying" which features lead vocals by Paul Osborn from The SuperMinx'70 and again it's an acoustic guitar driven tracks that sounds a bit like Cockney Rebel. We saw the band last week at The Putney Club and Paul joined the band on-stage for a superb rendition of the song which went down really well with the crowd. "No Apologies" is an uptempo unabashed Motown inspired stomper with a brass section adding to the overall feelgood factor.

The single "Remember The Days" will be familiar to fans of The Past Tense already and it sounds great amongst the track-listing here. "Another Putney Sunrise" is again an unexpected departure, it's a beautifully laid back and evocative song that's part Belle & Sebastian part Style Council, it really conjures up a bright and sunny early morning walk along the River Thames. "Just Keep Believing" is another positive call to action with some nice chiming guitar work, "Music Is The Key" is driven along by some more of those great keyboards and again like the previous track, it's sending out a positive message this time about the pleasures of being in a band. "What's Coming Next" starts off with "A Town Called Malice" style drumming and bass before cracking into a powerful little singalong. The album closes with "Putney Reprise" a whimsical little piece of Psychedelia that really brings the curtain down perfectly on a thoroughly satisfying album. With all the work the band have put into producing and promoting the album they deserve to be really proud of "Heads Held High". You can order the album from the band's web-site here.