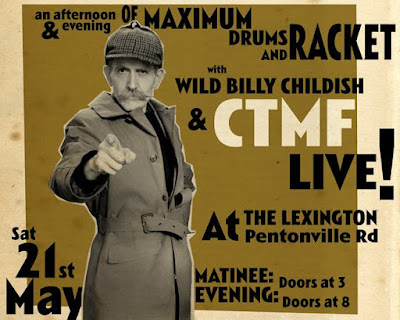 The inspirational Medway Garage Rock legend, author and artist Billy Childish has finally announced his long-awaited return to the stage with a gig at The Lexington on Pentonville Road in London on May 21st with his latest line-up Wild Billy Childish & CTMF. The band will play two sets, an all-ages matinee kicking off at 3pm and then an over-18's only set from 8pm. Please note that tickets only went on sale this morning and already the evening show has SOLD OUT! Tickets for the matinee are still available at the time of writing but I can't guarantee they won't have sold out too by the time you read this. It just goes to show the overwhelming interest in seeing Billy play live again.

Damaged Goods Records have also released a brand new 4 track 7" vinyl EP by The CTMF entitled "A Glimpse of Another Time" which precedes their forthcoming (and fourth) album. The title track of the EP is a song about the scene based round Slim Chance’s Club at the Wild Western Rooms in the 1990′s (The club was out the back of the St. John’s Tavern in Archway, North London). The club later moved down the road to the Boston Arms. Billy’s  group Thee Headcoats used to play a regular monthly stint there, which explains the cover photo taken in 1991 of  Billy fronting Thee Headcoats with Bruce and Johnny on that tiny, legendary, wild west themed stage. The cover photo was taken by my Retro Man Blog colleague Paul Slattery who worked closely with Billy during that period. You can order the single from the Damaged Goods Records on-line store at this here link.

In our Retrosonic Podcast Billy Childish special at our Soundcloud site here. Retro Man Blog and Photographer Paul Slattery visited Billy in his Medway studio to chat about some of his musical influences such as Hamburg-era Beatles, Link Wray, Muddy Waters, The Voidoids and more and the effect they had on his own work. Along the way we discuss and play some tracks from a selection of his many line-ups including The Pop Rivets, The Milkshakes, Thee Mighty Caesars, Thee Headcoats, The Buff Medways, The Musicians of The British Empire and his latest band The CTMF.


For the Blog feature to accompany the Podcast which has some exclusive Paul Slattery photographs of Billy from throughout the years from the crowd at the Sex Pistols Brunel University gig in 1977 right through the various line-ups to the present day, please check out the link here.