The Shockwaves "No Way In No Way Out" Album Released on Trash Wax Records Almost 30 Years After Recording! 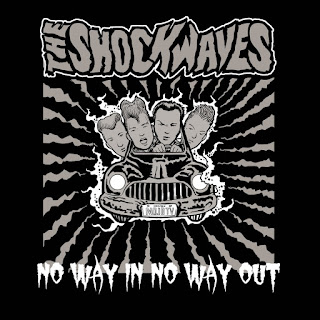 The Shockwaves "No Way In No Way Out" album has certainly taken some time to finally see the light of day, almost thirty years in fact! After coming to the attention of The Cannibals' Mike Spenser following gigs at his Garage Rock club nights at the much missed Hammersmith Clarendon back in the mid-80's, he invited the band to record an album for his fledgling label Hit Records. Mike booked Cherry Studios and roped in his friend Dave Goodman as producer. Although Goodman might be better known as the engineer who recorded the Sex Pistols early "Never Mind The Bollocks" sessions, apparently The Shockwaves were more impressed by the fact that he had worked with The Sid Presley Experience! Influenced by The Vibes and The Purple Things, The Shockwaves played at venues such as the Clarendon and the Sir George Robey supporting bands like The Guana Batz. Unfortunately, Hit Records folded before Mike could release the album and the band split up amicably soon after. So it seemed that was very much the last we would hear of The Shockwaves, although various band members would go on to be involved with Orbital, Alabama 3, The Shamen and The Dustaphonics amongst others. However, fast forward some thirty years and 80's Garage Trash scene specialists Trash Wax Records contacted the band with an offer to finally release the long-lost album and have put it out as a very limited 250 copies pressing. You can order "No Way In No Way Out" here and check out the comprehensive Shockwaves story at the excellent "Trash, Garage, Garbage & Other Delights" web-site here. "No Way In No Way Out" is a collection of eight manic, wired classic 80's Trash Rock tracks that still sound fresh and exciting today. The songs have more in common with the discordant tones of bands such as Bone Orchard, Gallon Drunk and The Membranes rather than the Punked-up Rock 'n' Roll of the Psychobilly scene or the more traditional 60's Nuggets influenced R'n'B of many of their contemporaries and it's well worth getting hold of. 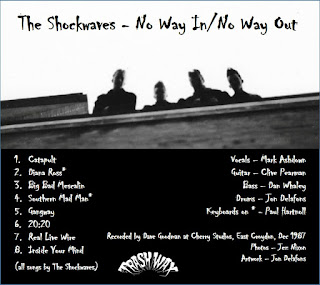 Mike Spenser is currently hosting Trash Can Radio and you can read tales of The Shockwaves bassist Dan Whaley's interesting and amusing adventures in Rock 'n' Roll at his own Blog here.