The Galileo 7 - New Album "Live-O-Graphic", New Single "Cruel Bird" and French Tour - All in one week..! 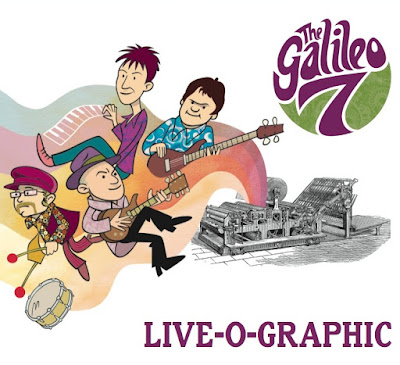 As I write this The Galileo 7 are setting off on a marathon Tour de France of 10 gigs in 10 days. Well, having said that I just heard on the grapevine that their luxury tour bus has been involved in a little scrape in Folkestone! Hopefully their crew have got it all sorted by now and they are back on the road as they are due to kick off with gig tonight in Caen in Normandy and will then travel all the way down the length of the country to Perpignan in the Pyrenees, a short hop from the Spanish border. They will then wind their merry way back up to Flanders to finish off with a show in Lille on April 09th...En-route they will take in places such as St. Etienne, Grenoble, Toulouse - say goodbye to the town for me will you guys? - sorry for the corny Stranglers related joke there...! For full details of their voyage de Rock 'n' Roll please check out the tour dates and venue information here.

It's certainly been a busy week for the band as they have just released a brand new single and album too. First of all we have the single, "Cruel Bird/Nowhere People" a limited edition (500 copies only) 45rpm 7" vinyl, the first 200 of which will be pressed in translucent purple vinyl. It's only available at State Records here or from the band directly either via their web-site here or at the merch stall at gigs. The proud record company sums it up perfectly..."All the by-now-familiar elements are in place—a thundering Who-like rhythm section, biting fuzz guitar, swirling organ and exquisite 4-part vocal harmonies...it's like a honey-coated punch in the mush!" 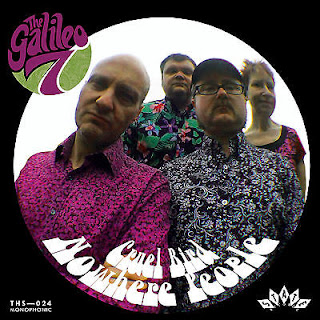 Then there's "Live-O-Graphic" which comes hot on the heels of the superb "False Memory Lane, we'll let the band explain: "The “Live-O-Graphic” Session…ten revved up, incendiary, ‘nearly live’ versions of previously released songs! The live backing tracks were burned out by the MK3 line-up of The Galileo 7 in one frantic hour, hemmed in by the mechanical clutter and ephemera of a working lithographic press, ignoring thumping headaches induced by a toxic combination of chemical vapours and extreme volume levels…but high on the alchemic rock’n’roll fumes of a spontaneous, unplanned recording session! These versions crackle with almost uncontainable energy, and outstrip the originals for verve and intensity. The one-take vocals and harmonies were added later in a similarly pressured and time-limited session to preserve the intense feel of the tracking session. This is a red hot ‘Live-O-Graphic’ sampler of some of The Galileo 7’s best songs".

"Live-O-Graphic" follows up on the idea spawned by the successful "Good Things" album from G7's singer/songwriter/guitarist Allan Crockford's other band Graham Day & The Forefathers, where they plundered the illustrious back catalogue of The Prisoners, The Solarflares and The Prime Movers to re-record a selection of classics live in the studio to document their live set at the time. So this is what we have with "Live-O-Graphic", a snap-shot not just of the sort of songs you can expect when you see The Galileo 7 play live now but more importantly the energy in which they are being played. I have already written about the impact that the line-up change had on the band with Mole switching to drums and Paul Moss joining on bass. The whole dynamic of the band seemed to be ratcheted up a fair few notches and the live shows just got better each time, this is in no small part to Mole's frenetic Keith Moon-style visual and aural blur of an assault on his drum-kit. This is really apparent on the opening track "Never Go Back" from "Are We Having Fun Yet?" which sets the stall out on what is to follow perfectly. Paul Moss also adds a lively energetic presence to the stage and this awesome rhythm section enable keyboardist Viv and Allan to add their magic. Viv's swirling keyboards are more to the fore on "Live-O-Graphic" and she also takes on lead vocals on "Don't Know What I'm Waiting For" with the others chipping in with some nice harmonising. There's a pick from all three studio albums plus a version of the stand-alone single "Modern Love Affair". The old favourites "Anne Hedonia" and "Orangery Lane" are given a right kick up the bracket with Mole's drumming adding another dimension to those much loved studio versions. I think Allan's confidence in fronting the band also seems to have been boosted with the new line-up too as anyone who saw the band put in a stunningly powerful performance at the Fighting Cocks in Kingston recently will testify. His guitar playing also deserves a lot more attention and hopefully "Live-O-Graphic" will address this too, as you only have to check the fuzzed riffing on "Orangery Lane" for an example. So the band are going from strength to strength and judging by the quality of some of the new songs they have been adding to the live set recently let's hope the prolific releases keep on coming!

Check out the The Galileo 7 web-site here for more information, we'll be playing the new single "Cruel Bird" in our next episode of Retrosonic Podcast too so please keep a check on the Blog for news on that. Also, don't forget drummer Mole's excellent State Records for loads of lovely vinyl!

Email ThisBlogThis!Share to TwitterShare to FacebookShare to Pinterest
Labels: Allan Crockford, Galileo 7, The Prisoners, The Solarflares