The November Five - "Throwing Rocks Against The Sun" - New Album Out March 11th! 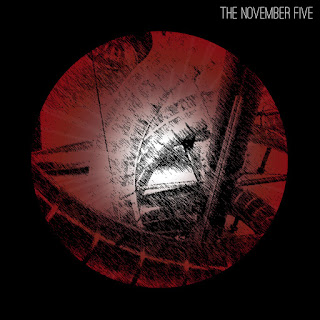 Three years on from the release of their acclaimed debut, "If You're Satisfied You Are Dead", The November Five are back with their new album, "Throwing Rocks Against The Sun". Spring loaded with eleven coruscating anthems for the austerity, this is a howl of rage and disgust at a world that demonises and punishes the poor, vilifies the victims of war and allows the perpetrators to get away scot-free. This is an album that demands to know which side you are on from a band that kicks against the pricks. It's a mighty recorded return for The November Five who have spent the intervening years between albums increasing their reputation as one of the country's most incendiary live bands. Along the way they've shared stages with The Membranes, Little Barrie and Jim Jones & The Righteous Mind among others while leaving a trail of devastated venues and breathless audiences. The new album continues in the vein of their excellent debut and is packed full of their tense yet tuneful numbers that demand your attention. For example, "You Can't Hide From Time" skewers the riffs from "I Can't Explain" and the Pistols' "Submission" into an absolute belter of a song. I have written before that the band transport me back to that great late 70's early 80's period where bands such as Magazine, Mission of Burma, The Ruts, The Skids and Gang of Four were taking the energy of Punk Rock and twisting it into tuneful yet challenging Rock'n'Roll, pushing the boundaries of all those pesky genres and labels. Songs such as the melodic "A Little Knowledge" and the raw power rush of "We All Slide" really highlight the song-writing skills of the band. But I think my favourite track has to be "I Am The One" that, despite clocking in at just under two minutes, pretty much encapsulates all that is great about The November Five with it's crunching guitar riff and insanely memorable chorus. But don't just take my word for it, here's what some real professional types in the media say:

“The November Five are gathering momentum and things are only going to get bigger. Their incendiary politicised debut is highly recommended” - Vive Le Rock


"Throwing Rocks Against The Sun" was recorded, mixed and mastered at Soup Studio, London and produced by The November Five with Simon Trout & Giles Barrett. The album will be released on CD and download by Montauk Industries on March 11th and can be ordered from the band's official web-site here. You can hear a great track from the album in Episode 21 of Retrosonic Podcast.

Email ThisBlogThis!Share to TwitterShare to FacebookShare to Pinterest
Labels: The November Five