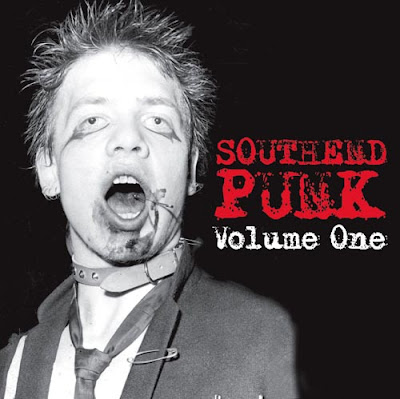 I received this great compilation CD in the post entitled “Southend Punk Volume One” which has just been released on Steve Pegrum’s Angels in Exile label. Steve also runs the excellent, comprehensive web-site and archive Southend Punk 1976-1986 and being a veteran of some of the bands featured on the album, is perfectly placed to offer us some prime cuts of local talent. I’ve met Steve a few times over the years and can vouch for his dedication and enthusiasm to local Punk Music. Southend is a place I know a bit about, being originally from Essex myself and having some old friends in the town and other nearby places. I’ve been to the fabulous Adrian’s Record Store in Wickford, attended gigs at Crocs/The Pink Toothbrush and of course paid homage to those legendary musical landmarks such as The Kursaal and Dr. Feelgood’s Canvey Island. I also remember when I used to go and see The Damned at places like The Lyceum and Hammersmith Palais in London, there was always a large following of Southend Punks at the gigs. The Damned were a band that the area seemed to take to their hearts. Then, as the Positive Punk and Gothic scenes emerged, I used to regularly go to gigs and clubs like the Batcave with my pals from Southend. I even wrote about local bands like Anorexic Dread, The Hints and Puppets Prey in my old DIY fanzine “Out of Step” and put out some of their songs on my cassette label. Many years later, I kind of rediscovered Southend mainly thanks to the fantastic pub and venue The Railway, brilliantly and enthusiastically run by Fi and Dave Dulake, and ended up putting on a few Retro Man Blog nights there with The Len Price 3 and TV Smith of The Adverts in conjunction with help from local Podrophenia Podcasters and DJ’s Mondo & Piley and Steve Pegrum also helped out with the promo too. On one night, one of the support bands was the superb Eight Rounds Rapid who include Wilko Johnson’s son Simon on guitar and I was chuffed to bits when his Dad turned up to watch.

So, I was really excited to receive the CD and check out some of those bands who I often only knew by name and reputation. My favourites include “How Did You Know” by the Steve Hooker Band, mainly due to the pumped up R’n’B feel and the harmonica which seems to capture the very essence of the area’s sound. The Garage Rock vibe of The Vicars “Radio Roy” also impressed as does the closing track, an instrumental by the Armless Teddies that reminds me of The Damned’s “Smash It Up Parts 1, 3 & 4”. It’s also interesting to hear The Prey as here they sound more akin to The Chords and The Jam, slightly different to the band Puppet’s Prey that they morphed into when I knew them. The compilation aims to document as many of the bands as possible from the Punk rock era that emerged from Southend and its environs. Many bands have contributed tracks that are making their debut appearance on CD. The compilation itself emerged as an idea after the success of the Southend Punk Rock History website, with many people asking to hear these bands whom they hadn't had a voice for a long time. Steve launched the website “Southend Punk Rock History 1976–1986” in 2006, celebrating the Punk and Alternative heritage of this seaside town on the Thames Estuary. The Punk explosion hit the town hard, and being only 32 miles from London, Southend Punks enjoyed not only their own thriving scene, but were also able to regularly inhabit all the London and surrounding area Punk gigs and clubs.

The website celebrates Southend's own experience of The Punk Years though, and with the contributions of photographs and various items of memorabilia from many local Punks, the site’s archive has grown considerably since its inception. The Southend Punk Volume One compilation CD is an extension of the site, and it includes 14 tracks by many of the main Punk bands that the area produced during the period such as The Machines, The Steve Hooker Band, The Vicars, The Deciballs, The Psychopaths, The Shocks, The Bullies, The Icons, The Sinyx, Kronstadt Uprising, Allegiance To No One, The Burning Idols, The Prey & The Armless Teddies. If successful, further volumes will be released. The CD comes with an excellent 16 Page colour booklet designed by Viki Vortex, which includes detailed text on the bands and rare photos and memorabilia and it provides an excellent insight into this special era. 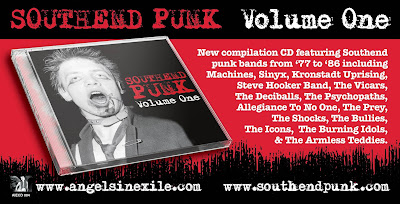 With thanks to Steve Pegrum. You can order the album from the Angels in Exile web-site here.

There are some features on our Retro Man Blog/Podrophenia/Southend Punk nights at the Railway up at the Blog archive now, click the highlighted dates below to find out more...