The Bug Club and Premium Leisure at The Lexington, London Wednesday April 6th

Now, here was a gig to lift the spirits – The Bug Club at a sold out Lexington. It’s great to catch a band in the ascendancy, to be there when there’s a tangible buzz of excitement amongst the crowd, knowing that there might not be many more chances to see them play in such intimate surroundings. In fact, on the back of the phenomenal demand for tickets, the band have already announced a bigger London show at the nearby Scala in Kings Cross on October 26th. There’s a real sense of anticipation fizzing around the packed out venue and I notice the mix of ages, proving that The Bug Club’s eclectic mix of musical styles and influences appeals equally to old gits like me as well as a much younger audience. Guitarist and Vocalist Sam appears on stage alone and kicks off proceedings with “Pretty As a Dog In The Light”. Drummer Dan and Bassist Tilly take their places and slam into the quick fire “Word of God” which segues into the brilliant “My Baby Loves Rock & Roll Music”, a number that Lou Reed would have been proud to have called his own.

The band are much more powerful and tighter than I imagined and they have an irresistible groove running through their more up-tempo songs like “Vegetable Garden” and “The Fixer” which follow the breathtaking opening salvo. There’s a great chemistry between the three bandmates, Dan is a superb drummer, locking into Sam’s rhythmic guitar and Tilly’s solid bass playing booming from a very cool looking vintage amp. Tilly struts around the stage, a constant blur of motion with her mop of blonde curls, only pausing to add vocals to the mix. In fact, it’s the wonderful boy/girl harmonies between Sam and Tilly that’s at the heart of The Bug Club’s appeal and this is apparent on the sublime “Pure Particles”. These infectious melodies and immediately memorable choruses mean that even the new song “Lay Down Your Roses” will be stuck in your head and seem as familiar as an old favourite by the time it ends. A big part of The Bug Club’s charm is that they are impossible to pin down. They can veer from rollicking Punk Rock blasts like “A Love Song” and “Doin’ Time” to beautiful bittersweet songs such as “We’d Feel Sadder at Twilight” with its “I might die today, tomorrow, would I mind?” and “I’d sleep better in the graveyard” refrain reminding me of The Smiths at their best. Then the band can crank out a three-song self-confessed “Classic Rock” section, complete with an ecstatically received drum solo from Dan.

They can switch tempos effortlessly and the sinuous “All of The Scariest Monsters Live in London” reminds me of Jonathan Richman while “Checkmate” cranks up the volume to Jon Spencer Blues Explosion levels on which Sam’s guitar work is a joy to behold. He can switch between Wilko Johnson’s stuttering rhythm guitar style to screaming Jimmy Page lead to the Bluesy Garage Rock of Jack White in an instance. Some of the stand out moments for me include the brilliant Pixies’ Quiet Loud Quiet dynamic of “Launching Moondream One” and the guaranteed future Indie classics “If My Mother Thinks I’m Happy” and “We Don’t Need Room For Lovin’”. These two also highlight the Bug Club’s intriguing, often amusing lyrics that are sung word for word by the happy punters around me. What a show, faultless from beginning to end, I’m blown away.

The only downside is how difficult it is to get any physical copies of The Bug Club’s music; something the band admitted on stage was getting them down too. They have released only very limited edition vinyl versions of the “Launching Moondream One” E.P. and “Pure Particles” mini-album, both unfortunately long since sold out. Tilly tells us sadly that they don’t have any records for sale tonight. “Blame Record Store Day!” someone shouts and Tilly responds “yes, please write to the Pressing Plants….Dear Mr. Pressing Plant…” It’s funny but also a bit of a shame and it wouldn’t surprise me at all if there weren’t a host of major record labels circling like greedy vultures ready to remedy this situation. The demand is there for the delights of The Bug Club so just be quick on the uptake for gig tickets and future releases, you don’t want to miss out.

The Bug Club have announced an extensive U.K. tour in October and November so please check out their Facebook page here for details. You can download their releases at the official Bandcamp page and we play one of our favourite tracks from the band in episode 45 of Retrosonic Podcast. 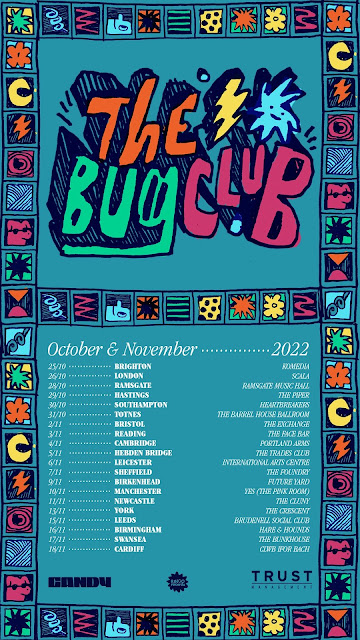 I must also mention the excellent support act Premium Leisure, who proved to be the perfect warm up for The Bug Club. Since COVID restrictions have lifted, I’ve been more selective on gig going and so the opportunities to be pleasantly surprised by a new (to me at least) band have been somewhat limited. So, I was glad I caught Premium Leisure, who are the vehicle for the Oxford based songwriter Chris Barker. He’s certainly assembled an excellent line-up to do justice to his songs as the musicianship of his bandmates was superb, particularly the lead guitarist, who’s inventive and atmospheric riffs really impressed. Stand out songs for me were “Easy FM”, “Algorithms”, “Ready For Ever” and the powerful groove and dynamics of “Remedies”. It’s refreshing to see a band where I can’t second-guess their reference points, to just go with the flow of the music without any preconceptions. In fact, I asked Chris about this after their set and he told me that his main influences included White Denim and 70’s Psychedelic Rock. Anyway, I’ll definitely be keeping an eye out on future releases from the band and will play a track from them in our next Retrosonic Podcast episode. For more information on Premium Leisure please check them out here.
Posted by Retro Man at 15:27

Email ThisBlogThis!Share to TwitterShare to FacebookShare to Pinterest
Labels: Premium Leisure, The Bug Club, The Lexington