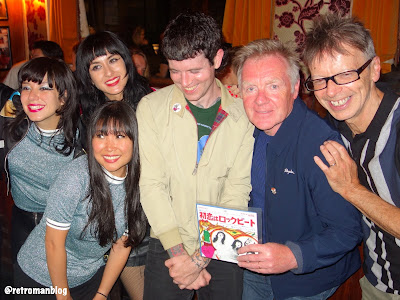 One of the joys of live music is that you never know what special moment you could be there to witness. Tonight at the climax of the Pump It Up Power Pop Weekender at a packed out Lexington, that special moment was to see Damian O’Neill and Billy Doherty from The Undertones take the stage with New York’s finest Power Pop Punks, Baby Shakes to deliver an ecstatic run through of “Teenage Kicks”. It was a sheer delight, both Billy and Damian looked as youthful as they did performing the classic on Top of The Pops back in the day, they have hardly changed and I am extremely jealous! I’m not sure who was the happier, Damian and Billy both grinning ear-to-ear and lapping up the affection, Baby Shakes who looked chuffed to bits to be sharing the stage with two of their musical heroes or us in the crowd, singing along at the top of our lungs. Of course, there is history between Baby Shakes and The Undertones as you can discover in our thoroughly entertaining Retrosonic Podcast with Mary, Claudia and Judy, where they not only talk us through the band’s history and influences, but also explain how they got to know The Undertones. This mutual appreciation culminated in the superb Dimple Discs Records 7” single on which the band covered “Sweet 'n' Sour”, the suitably Glamtastic song from Damian’s solo album “Refit Revise Reprise” along with Billy’s Undertones B-Side “Really Really”. It was our single of the year and quite rightly so. 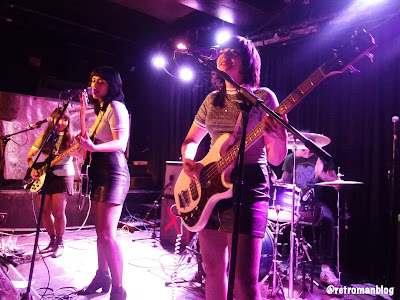 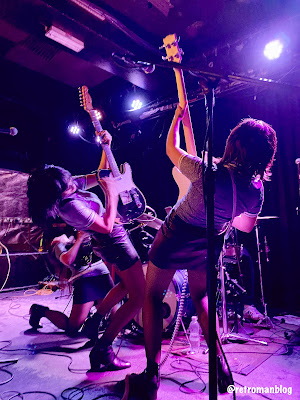 It was the first time to meet Baby Shakes in person since our comprehensive interview for Retrosonic Podcast, which I had enjoyed immensely. The band’s glowing enthusiasm and love of music totally won me over as we discussed their influences including some unlikely mutual favourites such as The Gymslips, Chron-Gen and the Incredible Kidda Band. I was even more delighted to finally get to see the band play as circumstances always conspired against me on their previous visits to the U.K. They certainly didn’t disappoint, as their perfectly-crafted good time Rock ‘n’ Roll songs lit a fuse among the adoring crowd. Right from the start of the brilliant opener “Do What You Want” the energy zapped around the room and there were smiles all around me. None more so than from the band themselves as the chemistry between vocalist and rhythm guitarist Mary, bassist Claudia, lead guitarist Judy and drummer Ryan was a joy to see. It’s always nice to see a band enjoy playing as much as we enjoy watching them. Just like The Undertones, Baby Shakes also have a summer anthem of their own, the high voltage “Summer Sun”, which is received with a huge cheer. The great songs keep on coming, my personal favourite “Cause A Scene” starts off with a Sweet-style drum intro before changing gear into a Glam-tinged tale of life on the road. 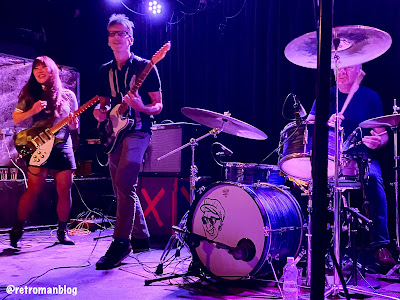 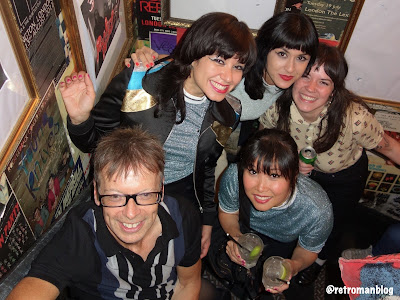 As we covered in our Podcast, Baby Shakes also have a conscientious side as is apparent in their benefit shows and the good-cause supporting record releases and they hint at the unrest in their home country with a blistering version of MC5’s “American Ruse”. They hit us with another great cover version, Claudia plays a superb bass intro that evolves into an instrumental take on Radio Birdman’s “Hand of Law”. It really works, sounding almost like a Spy movie theme tune, a great and unexpected treat. “Another Place” and “Cruisin’” crank up the good vibes even more and next to me, Sophie from The Big Heads can hardly control herself, hollering at the top of her voice and dancing with Duncan Reid and Mauro from The Speedways. Then after a brilliant “Love Song In Reverse”, Mary introduces Damian and Billy for “Teenage Kicks” and Sophie can’t resist leaping on stage in her excitement to add backing vocals. It’s fantastic to be able to get that cathartic thrill from live music again after all the trials and tribulations of two and a half years of the pandemic. “Stuck On Blue” closes a quite exceptional set that I really didn’t want to end. I just hope that Baby Shakes come back for a full U.K. tour very soon, although in the meantime they are now off to the Continent for shows in France, Spain, Italy and Germany – those lucky Europeans! 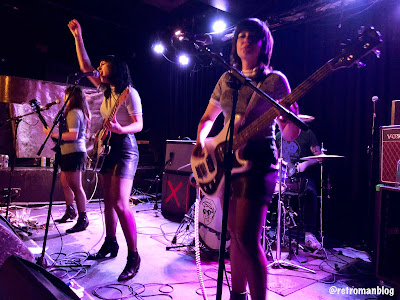 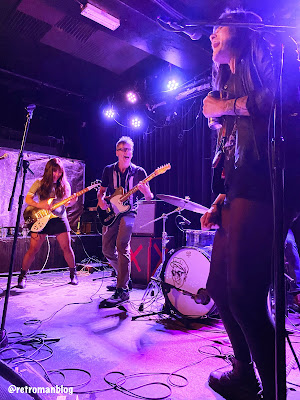 Baby Shakes set was the culmination of the Pump It Up Power Pop Weekender run by the Some Weird Sin club night gang that includes Mauro of The Speedways and Simon from Desperate Journalist, both former bandmates in Jonny Cola & The A-Grades. They invite a pick of International Power Pop bands which over this weekend included The Yum-Yums, Alvilda, Radio Days and Caroline and The Treats. Unfortunately, the Saturday night clashed with The Gruesomes first ever U.K. show so I only made it along on the Sunday evening in time to catch a brilliant set by Smalltown Tigers. The Italian all-girl trio took the stage dressed in black and white asymmetrical 60’s style outfits and I was expecting a lighter Mod Pop sound. However, appearances can certainly be deceptive. 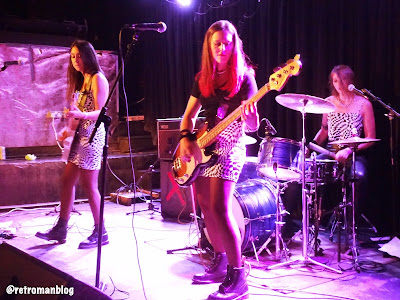 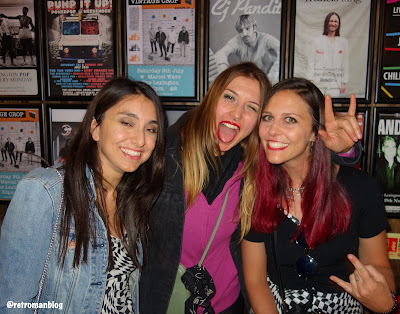 I should have noticed their big Dr Martens boots as they kicked my preconceptions into touch with a sound that was far more powerful and raw than I was expecting. It certainly shook the Lexington to the rafters. The band played a superb set of pumped-up Punk Rock ‘n’ Roll featuring songs off their current 8-song mini album “Five Things” of which the ominous Cramps style riffing of “Darling Please” was a personal highlight. Monty’s crushingly powerful chords and the excellent pounding drums from Serena are topped off by bassist and lead vocalist Valli, who has an awesome voice. Valli has a wonderfully raw growl that reminds of Kim Shattuck of The Muffs, apt then that the band are called Smalltown Tigers. There are shades of L7 and the Runaways in the band’s sound but they stand out on their own with the melodic attack of songs like “Just Friends” and the album title track “Five Things”. Oh, and they end with a blistering thrash through the Ramones/Motorhead classic "R.A.M.O.N.E.S." I bought a copy of the album on vinyl at the show and saw Damian O’Neill also clutching a copy as he had his photo taken with the clearly awestruck band. The good news is that I will get to see them again as they are supporting the original Damned line-up at the Hammersmith Apollo in October, I'm looking forward to that very much. 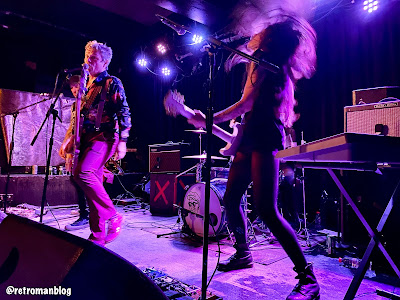 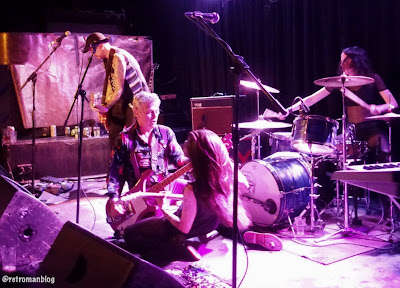 Duncan Reid and The Big Heads were next up and the purple clad former bassist with The Boys was a perfect choice to follow Smalltown Tigers and warm us up nicely for Baby Shakes. The melodic immediately memorable tunes and Duncan, the human dynamo himself, bouncing all around the stage left us all breathless, not just from singing along but with the sheer energy of it all. Duncan has assembled a superb band around him and he allows them to shine, each one a character in their own right. Guitarists Sophie K Powers and Nick Hughes on either side and behind them the excellent drummer Karen Jones who slams around the drum kit with impressive power. Duncan and his three Big Heads have a great chemistry between them and the all-action dynamics of their performance are mightily impressive, they must be one of the best live acts around. My highlights included the superb “Bombs Away” and “C’est La Vie” and of course they end a brilliant set with probably one of Power Pop’s most enduring anthems, The Boys “First Time”. I need a sit down after all that!
Please click on the highlighted links throughout the feature to discover more information along the way. Our Retrosonic Podcast specials with Baby Shakes, Damian O'Neill and Duncan Reid are still available at our archives - you can subscribe for free at Spotify, iTunes, Soundcloud, Apple Podcasts and Amazon Music. Videos of all three bands on the night can be found at our Retro Man Blog YouTube channel here. All photos and videos copyright Retro Man Blog.
Retrosonic Podcast · Baby Shakes
Retrosonic Podcast · Lockdown Lowdown Episode 7 with Damian O'Neill of The Undertones
Retrosonic Podcast · Lockdown Lowdown Episode 5: Duncan Reid of The Boys & The Big Heads
Posted by Retro Man at 22:34