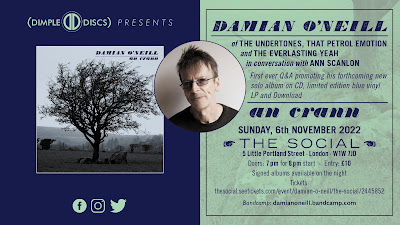 The Undertones played a blinder at the beautiful Art Deco De La Warr Pavilion in Bexhill-on-Sea on Saturday, a thirty three song set-list packed full of their melodic Pop nuggets. There was certainly no let up in the intensity as the songs whizzed by and the always amusing Mickey Bradley even commented on the rapid-fire delivery, "You can hold your breath right through to the end of most of our songs" and "we're playing even faster so that Billy can get back to watch Match of The Day". The band are on top form and the wonderful backing vocal harmonies from Damian and Mickey really shine through, although the crowd give them a run for their money as they join in whole-heartedly. Paul's voice and confidence has come on leaps and bounds (in fact he does quite a lot of leaping and bounding on stage) since I first saw one of the early shows after the band got back together. The 'Paul-era' songs so brilliantly collected in the recent Dimple Discs compilation "Dig What You Need" are well represented and in particular "Oh Please", "Thrill Me" and "Dig Yourself Deep" are as good as any of the classics from their impressive back catalogue.
But yes there's no escaping those classics and of course we get them all, "Here Comes The Summer", "Get Over You", a sublime "Wednesday Week", "Jimmy Jimmy" dedicated to Loaded editor James Brown and "Teenage Kicks" dedicated to the ever-youthful U.K. Subs frontman Charlie Harper, both present at the show. John and Damian's inter-twining guitars are as vibrant as ever and those timeless riffs on "You've Got My Number" and "I Know A Girl" really hit home. It's great that they play some of the less celebrated gems such as my favourite, the heart-tugging "Tearproof" and tracks such as "When Saturday Comes" and "Crisis of Mine". I recently wrote - at some length I know - on the importance and impact of The Undertones (and their various off-shoots) on my life in a feature on their stunning show at the Camden Electric Ballroom back in April so I won't repeat myself here, but needless to say The Undertones treated us to another life-affirming evening's entertainment. Anyway, please do check out my feature here if you would like to know just why they mean so much to me and there are lots of lovely photos if you do get bored with my heartfelt ramblings! 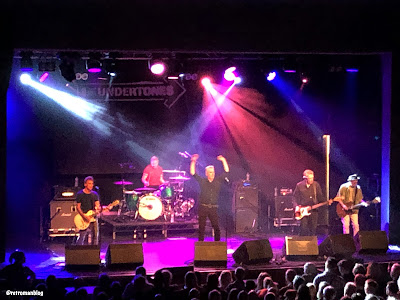 You can check out more videos from the show at our Retro Man Blog YouTube channel here.
Damian O'Neill has been busy outside of The Undertones too - the brilliant second album by 5 Billion In Diamonds to which he contributes, has finally been released on vinyl and then Dimple Discs will be putting out his new instrumental solo LP "An Crann" on coloured vinyl and CD. The vinyl pressing of this sounds particularly impressive and there have been advance copies for sale at recent Undertones shows. Before Saturday's show Damian told me he was a bit concerned what die-hard Undertones fans might think of the album seeing as it is all very atmospheric and instrumental, but I think anyone who did invest in a copy at the merchandise stands would be extremely impressed. As we discovered in our thoroughly entertaining career retrospective Retrosonic Podcast with Damian "From The Undertones to The Monotones" - he is no stranger to ambient and instrumental music and "An Crann" is a damn near perfect and satisfying listen. From the absolutely stunning opening track "Mas o Menos", which draws heavily on the Gitanes soaked Gallic atmosphere of Serge Gainsbourg's "Histoire de Melody Nelson" and The Liminanas, we are taken on an evocative journey through eleven beautifully constructed pieces of music. 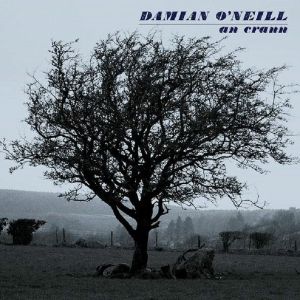 "An Crann" is not Folk music and it's not an album of 'ambient soundscapes', or is it? It's very difficult to categorise. It could almost be the soundtrack to an imaginary movie or incidental music from a prime Nordic Noir drama and yet then sometimes I get hints of Anton Karas's "The Third Man" or John Barry's "The Persuaders" theme. Then there are very organic, pastoral pieces that take you right out of your living room and place you deep into the middle of some mysterious fog-bound forest. The album's sound and feel is captured perfectly in Damian's daughter Rosa's stunning cover photography, in fact as the album was mainly recorded at home during lockdown, "An Crann" is something of a family affair. Damian plays most of the instruments throughout and wife Viv, along with Rosa, both add suitably atmospheric and effective vocal harmonies to the proceedings. To promote the album, Dimple Discs have arranged a Q&A session with Damian in conversation with Ann Scanlon at The Social at 5 Little Portland Street in London on Sunday November 6th, doors open at 7pm and tickets can be bought here. Copies of "An Crann" will be available on the night but if you can't make it, you can order from Bandcamp here. Don't forget to check out our Retrosonic Podcasts with Damian, two on his own music and a special on That Petrol Emotion where Damian is joined by Raymond and Ciaran from the band - you can subscribe to Retrosonic Podcast for free at Spotify, iTunes, Apple Podcasts or direct from our SoundCloud site below:
Retrosonic Podcast · Damian O'Neill: From The Undertones to The Monotones
Posted by Retro Man at 21:44