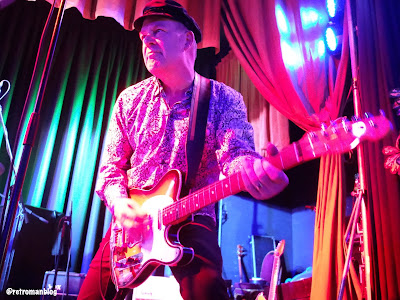 Back in one of our earliest episodes of Retrosonic Podcast – myself, Rock photographer Paul Slattery and Adam from The Jetsonics all happened to choose a Graham Day related track for the playlist – in the end we decided on The Solarflares “Windsor Oval” and bemoaned the fact that Graham’s most recent outfit, The Gaolers had sadly called it a day after two blistering albums. There were rumours that Graham had packed in music all together and sold off all his guitars and we all mentioned how good it would be for him to play again. Well, not long afterwards we got our wish as Graham Day and The Forefathers emerged. This new band consisted of Graham, his former Prisoners colleague and bassist, Allan Crockford along with Wolf Howard on the drums and all three were bandmates in Graham’s other post-Prisoners bands, The Solarflares and The Prime Movers. Graham told me in a later Podcast that The Forefathers were “basically a tribute band to myself” – the band were to play the best tracks from The Solarflares, Prime Movers, The Gaolers and of course, The Prisoners too. I knew I just had to get involved and through my dealings with the Medway based band The Len Price 3, who we were championing at the time, managed to secure a show for The Forefathers at The Half Moon in Putney for one of our Retro Man Blog nights. So, despite warnings from more than one person that the band may be “difficult” to deal with I wasn’t to be deterred and the gig sold out pretty much immediately. In fact, I was to go on to promote more shows for The Forefathers along with The Solarflares reunion at the Water Rats in Kings Cross and The Senior Service album launch as well as various gigs with Allan’s own Galileo 7, so obviously I never got to experience their so-called difficult reputation. I must admit though, I was in awe to meet Graham, Allan and Wolf for the first time and it was a bit difficult to separate the fan from the promoter in me initially. Luckily, this is all just a hobby for me, I’m not a professional, so the fan easily won out and I made sure I was down the front among the “middle-aged mosh-pit” as Graham christened us from the stage – leaping about and singing along to all those classic songs. The Half Moon gigs seemed to go down a storm and thankfully the band enjoyed them too, so we did a few more shows together over the years. I’d told the band that the first time I ever became aware of The Prisoners was seeing them on CH4’s The Tube when they played “Reaching My Head” dressed in Star Trek outfits and then before one Forefathers show at The Half Moon, I went backstage to see Star Trek costumes hanging in the dressing room. I was almost moved to tears! It was great hearing The Forefathers play those Prisoners songs again even if they were stripped back and raw minus the Hammond organ. 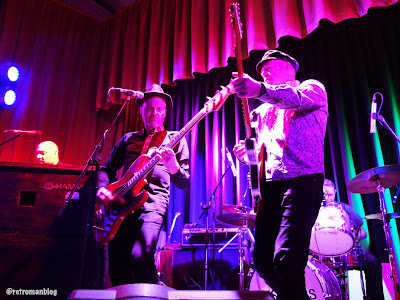 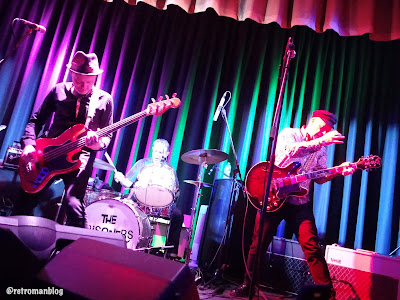 However, nothing quite beats the real thing and that’s what we got treated to courtesy of Lee Grimshaw and his team at the fabulous Spinout Nuggets, a Prisoners reunion to celebrate 40 years since the release of their classic debut album “A Taste of Pink” with the original line-up of Graham and Allan, James Taylor and Johnny Symons. The four of them had got together to play at a couple of benefit shows over the summer and I guess that’s where the idea for a full-scale reunion sprang from. So, some 37 years since I last saw The Prisoners, I was to get the dream opportunity to see them again at The Royal Function Rooms in Rochester, the jewel in their Medway home. The rush for tickets was phenomenal, the initial Friday night sold out in an instant and was soon followed by the announcement of further shows on the Saturday, then the Wednesday and Thursday were added too. Due to the demand, the Saturday was to be filmed for an on-line livestream which enabled even more eager fans around the world the chance to see their heroes in action. I must admit to being a bit concerned on how the shows would pan out and doubts were raised – would the band get along, Johnny doesn’t seem to have played drums regularly since The Prisoners, is James Taylor “too famous” nowadays? But as they took the stage to the strains of the theme from “The Sweeney” and Allan announced “track one, side one” and they powered into “Better In Black” and that crunching guitar riff hit everyone between the eyes, you could sense a huge tide of emotion spread through the crowd around me.
It was a real mixture of relief, disbelief and all those memories of being back at the Hammersmith Clarendon, the Star Trek outfits on The Tube flooded back. The band look great, sound great, turning back the clock – sounding as fresh, youthful and powerful as you could ever have wished for. For the first set, they play the whole of the debut album from the Garage Go-Go stompers like “Creepy Crawlies” and “Maybe I Was Wrong” to the emotional heartfelt numbers like “There Can’t  Be A Place” and my particular favourite “Til The Morning Light” which brings a lump to the throat – it’s a classic track that surely paved the way for The Charlatans and Inspiral Carpets to plunder and take to far more commercial success than the Prisoners ever achieved. It’s a travesty, but there you go – sadly, true originators often get overlooked. I mean, I can’t remember any other band on the scene at the time using a Hammond organ – The Fuzztones used a Farfisa to conjure up that authentic Nuggets sound but generally, keyboards and in particular the cumbersome Hammond, were a rarity. Of course, James Taylor has now become an internationally acclaimed Hammond maestro with his Quartet and it’s a truly wonderful experience to hear those swirling riffs again, in particular on “Say Your Prayers” which is a personal highlight. 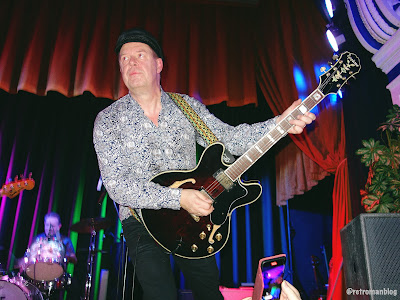 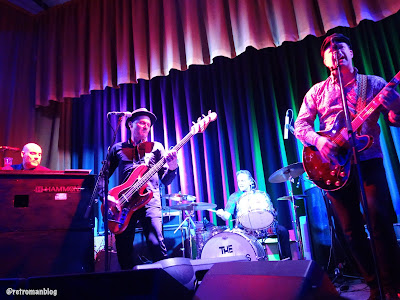 There’s an interval and a chance to catch up with friends and exchange delighted chatter about just how bloody marvellous it all is and there was a real buzz of adrenaline coursing through the Royal Function Rooms. I bumped into a lot of people I’d got to know through our Retro Man Blog gigs over the years, many of whom are in their own bands including The Past Tense, Jetstream Pony, Thee Girl Fridays, The Beatpack, Of Arrowe Hill, The Len Price 3, The Dentists and everyone agreed we were experiencing something very special indeed. Thankfully, the band seemed to be enjoying themselves too – there’s lots of smiles and a nice chemistry between all four bandmates and in particular, between Johnny and James. One thing that hit me was to reminded just how good a drummer Johnny is, he’s lost none of the chops, powering away cheerfully through some quite complicated drum patterns and his performance gets a thumbs up from everyone I spoke to. “Hurricane” opens the second set and then follows most of the superb “The Last Fourfathers” album, although sadly no “I Am The Fisherman” which is saved for the very last number on the Saturday night Livestream. Of course, “Whenever I’m Gone” gets a huge cheer but for me it’s the “Thinking Of You (Broken Pieces)” that hits me right in the heart and I must admit to a tear in the eye as everyone sings along to the uplifting chorus. It would have been worth the entrance fee alone just to experience that one moment of magic.
Retrosonic Podcast · Graham Day & The Forefathers
The set is punctuated by only two tracks from the “In From The Cold” album, luckily they are “Find And Seek” and the soulful strut of “Deceiving Eye” which has always been one of my favourite Prisoners songs. The band also play a fair selection of instrumentals including “Revenge of The Cybermen” and “Night of The Nazgul” – tracks that would lay the foundation for Graham’s current project The Senior Service and their Ennio Morricone, Barry Gray influenced tunes. The set closes with the classic “Melanie” which sparks off some frenetic dancing down the front and then sadly, it’s all over. But is it? Of course, there are encores, and the instrumental rarity “American Jingle” gets an airing along with “Reaching My Head” the very track that I first heard from The Prisoners and then finally it’s their cover of “Hush” and it really is all over. What can I say? Better than I could ever have hoped for – if it is to be The Prisoners last stand then I’m just thankful I was there to witness it. However, the reaction and demand was just too good to be ignored – and taking into account, the band seemed to be having fun too – I’m sincerely hoping that they will consider more gigs in the future. 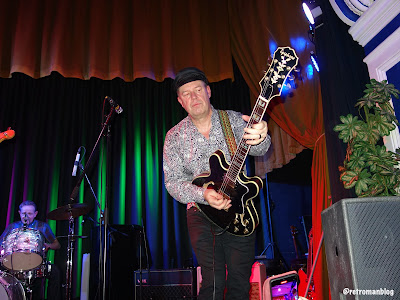 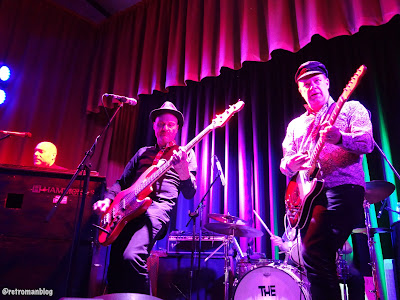 Sadly, just prior to the gigs the news filtered through that The Royal Function Rooms and worse still, the legendary Ranscombe Studios which is housed in the premises, are due to close soon. This is a nightmare and yet more damning evidence that cultural buildings have no protection in these relentless greed and profit driven times. How many great venues have we lost – not just the traditional down and dirty places such as the Marquee, The Fulham Greyhound, The Hammersmith Clarendon and the 12 Bar Club but historic buildings in their own right, like the Astoria and the Hammersmith Palais too. There is a fundraising concert at The St. George’s Hotel in Chatham on January 13th to help with the relocation of Ranscombe Studios that features a mouth-watering line-up of Medway talent including The Solarflares, The Len Price 3, The Galileo 7, The Masonics, Theatre Royal and more. Tickets and information can be found at this link. 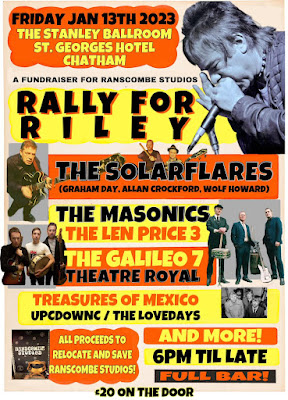 Huge credit to Lee and Dave Grimshaw at Spinout Nuggets and their team for organising the shows so brilliantly. Don't forget to check out the Retro Man Blog archive for loads of previous features on Medway related bands and music including reviews, videos and photos of all our shows with The Forefathers, Solarflares, The Galileo 7, The Len Price 3 and more. Also, all episodes of Retrosonic Podcast are available at our archives at Spotify, Apple Podcasts, iTunes or Soundcloud including interview specials with Graham, Allan & Wolf, The Len Price 3, Billy Childish, Ian Greensmith of The Dentists and much more besides. More videos from the Royal Function Rooms show can also be found at our Retromanblog65 YouTube channel, here's a taster...
Posted by Retro Man at 22:55