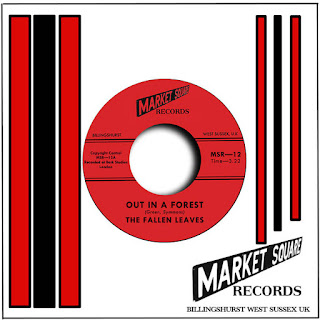 The Fallen Leaves - Out In A Forest b/w The Inside Of A Chair.

Out In A Forest b/w The Inside Of A Chair, released on Paul Messis' Market Square Recordings, is the group's second 7" vinyl single and features two sides of vitriolic power based indie-pop from London's greatest celebrators of underachievement, The Fallen Leaves. Side A 'Out In A Forest' is rooted in a four-chord, power-pop tradition with trembling guitars, weaving bass and a consistent drum beat holding it all together, whilst Rob Green's lead vocal melodically croons on top. It resembles early Indie shambolic pop of the early 80s, think of those early Creation/Living Room bands like The Jasmine Minks, The June Brides and The McTells vis-a-vis The Who's power-pop influence, there is also a bit of a "Postcard Records" feel with this single too. The Flip side, 'The Inside Of A Chair' is a short but bittersweet instrumental highlighting Rob Symmons fantastic and shambolic guitar work. This track ties very closely to his work in the pioneering punk band Subway Sect and from this song alone, you can hear his influence upon that group.

The 45 is limited to 300 copies and comes housed in a Market Square company sleeve and features a hand-numbered postcard. If you order from the Market Square Bandcamp page your purchase includes unlimited streaming of The Fallen Leaves - Out In A Forest b/w The Inside Of A Chair via the free Bandcamp app, plus a high-quality download in MP3, FLAC and more. The single is also being distributed by the fantastic State Records or you can order the single directly from Market Square Recordings here and for more news on future releases then please check out the Market Square Blog here. Here's a taster...

The Suburban Homes are having another E.P released in November, the aptly titled "Second E.P." will be released on In The Red and will be limited to 500 copies. The band are also working on a 12" single/mini album which will be out on Total Punk sometime in 2016. The Higher State have just completed their fifth full-length LP 'VOLUME 27', this is going to be out on 13 O'Clock Records in March/April 2016. NEXT YEAR, there are already plans afoot to release some great 45s on Market Square including 45s hopefully for Creation Factory, Sarah Bethe Nelson, Real Numbers, Higher State & Paul Messis.


For more news on The Fallen Leaves upcoming live dates please check out their web-site here. Also, don't forget our Retrosonic Podcast special editions with The Fallen Leaves where Rob Symmons and Rob Green take us on their journey from the very early stirrings of the London Punk Rock scene with Vic Godard & Subway Sect. The two episodes are generously sound-tracked with lots of Fallen Leaves songs, and we also discuss and play some of the band's favourite tracks and influences from Ramones, Trini Lopez, Buff Medways, The Who, Roxy Music, Dr. Feelgood, John's Children. Along the way we will meet some of the characters the band have rubbed shoulders with over the years including Vic Godard, Billy Childish, Bernie Rhodes, Joe Strummer, Malcolm McLaren, Paul Cook, Pete Townshend and more...So slip on your smoking jacket, pour yourself a cup of tea, get yourself comfortable on your chaise longue and listen to some fine Punk Rock for Gentlemen!