Those 12 Bar Nights - New Book by Mark 'Barnet' Webster with memories from Staff, Performers and Customers of the much-missed 12 Bar Club 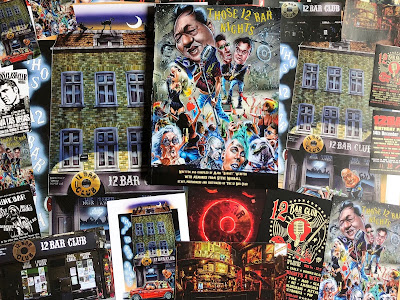 "Those 12 Bar Nights" is a suberb, beautifully presented new book by Mark 'Barnet' Webster that features memories, photos and stories from Staff, Performers and Customers of London's much-missed 12 Bar Club. I've heard the 12 Bar described as the best ever dive bar, a Punk Rock Heaven (and haven) and London's answer to CBGB's and it's loss to heartless property developers and culturally clueless money-grabbing local council and Government is still keenly felt. I haven't missed a venue so much since the Hammersmith Clarendon was similarly bulldozed to make way for a monstrosity of a shopping mall. Sure, I also mourn the loss of the Astoria, The Hammersmith Palais, The Old Trout in Windsor, The Marquee and many more - but the 12 Bar was so much more than just another venue. It was the social aspect too, a place where lasting friendships and memories were formed, all right in the heart of London's most famous and historic musical street, Tin Pan Alley or Denmark Street to give it it's rightful name. The book is beautifully illustrated and includes hundreds of photographs of not only some of the bands and people that appeared, but of the character-packed venue itself. Initial copies of the book were individually credited on the cover, signed and included prints, stickers and postcards of various flyers, posters and superb cartoon artwork, the whole package is an absolute delight. Credit to Mark for the painstaking work in compiling the many contributions into a fascinating and nostalgic look back at the 12 Bar Club's history - including my own, as you can see reproduced below... 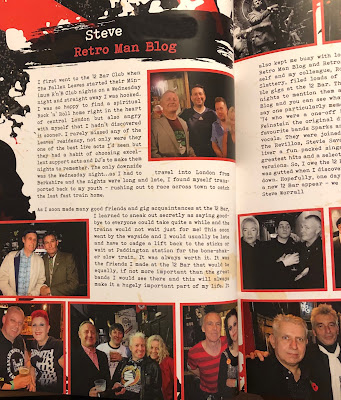 "I first went to the 12 Bar Club when The Fallen Leaves started their Minimum R'n'B Club nights on a Wednesday and straight away I was hooked. I was so happy to find a spiritual Rock 'n' Roll home right in the heart of London but also angry with myself that I hadn't discovered it sooner. I rarely missed any of the Leaves' residencies, not only were they one of the best live acts I'd seen but they had the habit of choosing excellent support acts and DJ's to make them nights to remember. The only downside was the Wednesday night... as I had to travel into London from out in the sticks and the nights were long and late, I found myself transported back to my youth - rushing out to race across town to catch the last fast train home. As I soon made many good friends and gig acquaintances at the 12 Bar Club, I learned to sneak out secretly as saying goodbye to everyone could take quite a while and the trains would not wait just for me! This soon went by the wayside and I would usually be late and have to cadge a lift back or wait at the station for the bone-shaker slow train. It was always worth it. 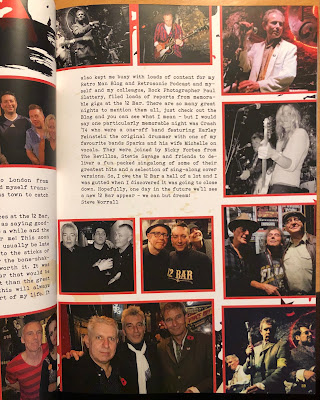 It was the friends I made at the 12 Bar that would be equally, if not more important than the great bands I would see there and this will always make it a hugely important part of my life. It also kept me busy with loads of content for Retro Man Blog and Retrosonic Podcast and myself and my colleague, Rock Photographer Paul Slattery, filed loads of reports from memorable gigs at the 12 Bar. There are too many great nights to mention them all, just check out the Blog and you can see what I mean - but I would say one particularly memorable night was Crash '74 who were a one-off band featuring Harley Feinstein, the original drummer of one of my favourite bands Sparks and his wife Michelle on vocals. They were joined by Nicky Forbes from The Revillos, Stevie Savage and friends to deliver a fun-packed singalong of some of their greatest hits and a selection of cover versions. So, I owe the 12 Bar a hell of a lot and I was gutted when I heard it was going to close down. Hopefully, one day in the future we'll see a new 12 Bar appear - we can but dream!" 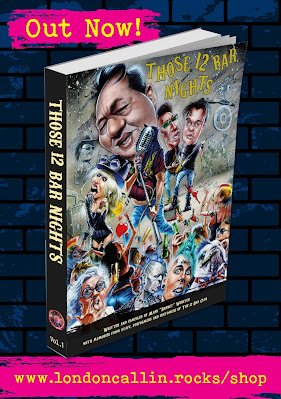 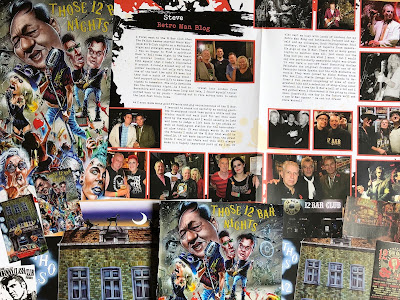 You can buy the book from the London Callin' web-site here and there's also a Facebook Group with more information here. There may be plans to release a second edition, so if you have any memories, photos or stories from the 12 Bar Club but missed out contributing to this book, then please contact Mark at the Facebook Group.
Posted by Retro Man at 17:38