Following my recent excursion to Southend with The Len Price 3, I took the time to visit some of the areas' Dr. Feelgood related sites such as The Kursaal and the Jetty on Canvey Island, which you can read about HERE. Then yet another viewing of the superb Julien Temple "Oil City Confidential" movie, and I was really in the mood to see Wilko! Sure enough, he didn't let me down...
﻿ ﻿
﻿John Blaney, author of "A Howlin' Wind", the story of the Pub Rock boom, was also there at the gig and he has written an excellent review of the night. You can see the full feature along with some of John's own photos on his Blog, also called A Howlin' Wind.
"The Arlington Arts Centre, Newbury, is set in the rolling countryside of West Berkshire. To be honest, it doesn't look like the kind of place you'd expect to see a rock concert. It has a vaguely institutional look, like it might have once been home to an insane asylum or secret military establishment. But it's home to a modern arts centre, which tonight is playing host to quite possibly the best R&B band in the country, if not the world, the Wilko Johnson Band. The joint was packed and the management had the good sense to remove a large chunk of seating, because as we all know the only way to enjoy the kind of music Wilko and Co. make, is in the vertical position and preferably dancing.
﻿ ﻿
﻿Come show time and Wilko, Norman and Dylan bound on stage dressed in matching black outfits and before you can say, "mine's a pint", they’re tearing into the first number. The set is a real crowd pleaser, mixing classic Feelgood songs ‘Roxette‘, Paradise‘ and ‘She Does It Right‘, all written by Wilko, naturally, with solo favourites like 'Dr Dupree' and carefully selected covers such as ‘Bye Bye Johnny‘.Wilko was on top form, singing and playing with incredible energy and soul. He's an exemplary showman who knows exactly when to up the excitement levels, bursting into a wild tarantella every time he takes a solo. Norman Watt-Roy is no less impressive, an incredibly gifted and energetic performer, he's the perfect foil for Wilko's minimalist guitar style.

His melodic and inventive playing adds subtle nuances to Wilko's pithy compositions that flesh them out but never make them flabby. Combine Norman's powerhouse playing with Dylan's mighty yet tasteful drumming and the result is a near perfect rhythm section. This band swings, and there are few that can do that. The show is over far too soon, but the band launch into a series of encores that culminate in one last song for the road, a revved up version of 'Route 66'. Everybody had a great time, including the band, they didn’t stop smiling once during their performance. You can't fake that, and when a band is having fun you can bet the audience is having fun too. If you haven't caught Wilko, Norman and Dylan in concert, it's not too late and you won't be disappointed."
﻿
Many thanks to John Blaney for the great review. 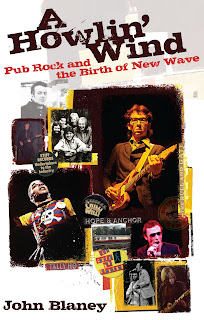 John Blaney's book "A Howlin' Wind" traces the history of pub rock from its Mod roots through to its reinvention as British New Wave. He covers all the essential bands such as Eggs Over Easy (who started it all at the Tally Ho in Kentish Town), Brinsley Schwarz, Kilburn & The High Roads, The101ers, Dr Feelgood, Elvis Costello, Graham Parker and more, in a fascinating study that has been painstakingly researched. Stiff Records were crucial to the movement, signing Ian Dury, Nick Lowe, Dave Edmunds and Elvis Costello who were all on roads to nowhere, but made it big as a result of Stiff’s involvement and the book ends with the "Be Stiff" tour of 1979. In addition to an 8 page plates section, there are black and white images of people and memorabilia scattered throughout the book, making this a lovely memento of an era known as Pub Rock, "A Howlin’ Wind" that blew away the cobwebs from a moribund music scene. You can find out more information about the book, including reviews and links to order a copy at Soundcheck Books.
Posted by Retro Man at 09:49