The Fay Hallam Trinity "How To Be Here" New 7" Vinyl E.P. Out Now on Dr Soulmaker Records 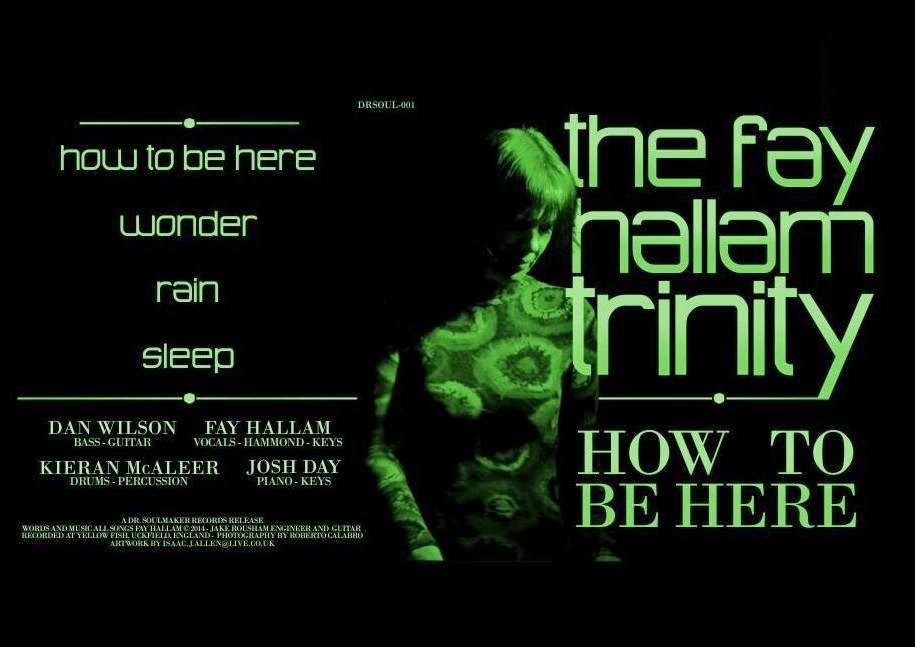 The latest release by The Fay Hallam Trinity “How To Be Here” is out now on Dr. Soulmaker Records, it's a four track EP on purple coloured vinyl and is a limited edition of 250 copies only. The record features four excellent songs with the storming opening title track, which is much heavier than you might imagine, a short sharp shock that comes riding in over an organ riff that is reminiscent of The Doors' "Waiting For The Sun" underpinned by some fuzzed up slide guitar. Label boss Paul Phillips kindly gave Retro Man Blog a bit of background on the release, over to Paul: "The EP has so far proved to be a big hit amongst the loyal army of fans who have followed Fay Hallam’s music since those heady days of the early ‘80s when bands such as Makin’ Time, The Prisoners, The Scene and The Moment, amongst others,were key players in the Mod scene both through their vinyl offerings and their live gigs. For those in the know, Fay Hallam has consistently produced some of the greatest singer/song writing music in all our record collections with her groups such as Makin’ Time through various incarnations including The Prime Movers, The Gift Horses and Phaze right up until her current band The Fay Hallam Trinity. I’ve been a huge fan of Fay’s music since the early days with Makin’ Time and I’ve got to know Fay and her band over the years through the live gigs.

Last year the band put out an EP on CD format called "How To Be Here". This caused something of a stir amongst her diehard fans to the extent that there was something of a campaign on Facebook to get the EP released on vinyl. I have always been a vinyl fan since stealing my mother’s Jimmy Smith records as a kid growing up, and that might also explain why I have something of an obsession with the Hammond Organ. So, when I heard the latest EP on CD I immediately felt I had to try and help get it out on vinyl. Fay’s trusty drummer Kieran McAleer was also keen for this to happen. The recording of the EP was done at Yellow Fish Studios, the very same studio  in which Wilko Johnson and Roger Daltrey had recently recorded their album. Fay’s trademark intelligent lyrics, powerful vocal delivery, sublime melodies and Hammond sounds shine throughout this record. This is the first release on my new Dr. Soulmaker Records label. Due to the recent resurgence of vinyl it’s taken quite a long time to produce, as the manufacturers seem to be working flat out. I think everyone’s pleased with the final product though and I hope to keep the Hammond sound alive with future releases. This record has so far had some great exposure on the airwaves, featuring on Gary Crowley’s BBC Radio London Show, Ed Piller’s Modcast and Alan May’s Glory Boy Mod Radio Show. Copies of the vinyl EP are still available via the Fay Hallam Trinity official Facebook site. I might even still  have one or two signed copies available if you ask nicely! If you are a fan of the band please join the website as it’s the place to get the latest news on future gigs and maybe a new release in the not too distant future!" - Paul Phillips, Dr. Soulmaker Records.

Thanks to Paul Phillips
Posted by Retro Man at 19:48