Graham Day & The Forefathers, The Len Price 3 and The Galileo 7 at the Retro Man Blog Night on May 08th at The Half Moon Putney 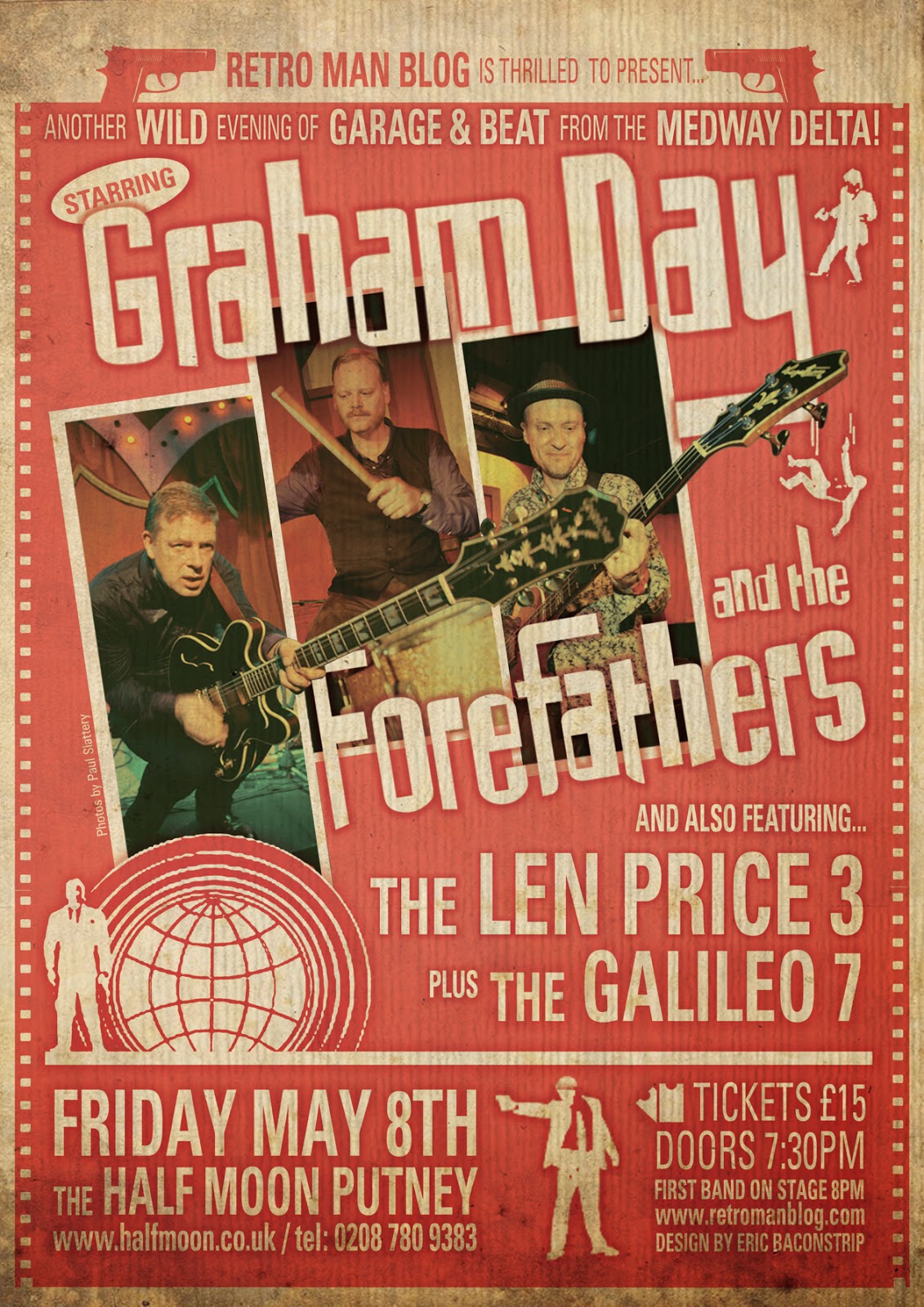 We are very pleased to announce that the next Retro Man Blog Night at the Half Moon in Putney will be a repeat of last summer’s sold-out “Medway Garage Rock” special featuring Graham Day & The Forefathers, The Len Price 3 and The Galileo 7. Since last year’s show all the bands have been very busy, The Forefathers released their debut album “Good Things” with a launch gig at 229 The Venue in London. The Galileo 7 released their third album “False Memory Lane”, re-vamped their line-up and will release a new single shortly. The Len Price 3, fresh from their excellent work on the soundtrack to the movie Pubmonkey, will release a one-off 7” vinyl single for Record Store Day. So, all three bands are at the top of the game and this gig is one not to be missed, especially as it is a rare chance to catch The Forefathers in such an intimate environment.

As last year’s show sold out well in advance we’d recommend pre-ordering tickets, especially if you are travelling, as it is highly unlikely that there will be any tickets available on the door. Tickets can be booked via the Half Moon web-site here or directly at the venue over the bar.

Graham Day & The Forefathers are the crucial ingredients of The Prisoners, Prime Movers, Solarflares and The Gaolers extracted and squeezed into one stripped down power trio. Cranking out choice live cuts from four Graham Day-fronted bands, The Forefathers (triple) distil 30-odd years of high quality song writing, low-fi production and high energy performance to their raw garage-rock essence. After a handful of dates as the Prime Movers, Graham Day, Allan Crockford and Wolf Howard, now rechristened Graham Day and the Forefathers, are unashamedly pumping out the best material from all the line-ups, including the Prisoners, with an uncompromising verve and energy, undiminished from their earliest days. All of this was perfectly captured on the excellent debut album from The Forefathers entitled "Good Things".

The Len Price 3 are an adrenaline pumped pop band from England, forged in the traditions of their Medway Delta roots. With each album and single release receiving glowing reviews and every live show leaving behind a highly satisfied audience full of enthusiastic devotees, The Len Price 3 are fast becoming a true national treasure. Expect a brand new 7" vinyl single to be released to coincide with Record Store Day, we'll be playing an exclusive track from the single on Retrosonic very soon!


The Galileo 7 are a Psych-tinged garage-rock/power pop from The Medway Delta featuring Allan Crockford ex-Prisoners/Solarflares/James Taylor Quartet. The band are riding high on the praise heaped upon their latest album "False Memory Lane" and their new look line-up has upped the live energy levels even more. The band will soon release a brand new 7" double A-Side single on State Records entitled "One Lie at a Time"/"The God of Gaps".

Graham Day & The Forefathers and The Len Price 3 both contribute a track each to The Half Moon's "Live From The Moon" Ltd edition 12" vinyl album - available from The Half Moon website and over the bar. The tracks were recorded live at last year’s Retro Man Blog Night.


Don’t forget our special Retrosonic Podcast with Graham Day &The Forefathers, where we talk to Graham, Allan and Wolf about their illustrious musical careers and play a great selection of tracks from their back catalogue. There’s also the Pubmonkey Podcast where The Len Price 3’s singer/songwriter Glenn Page tells us about their involvement with the movie’s soundtrack and we chat to the writer and actor Jamie O’Hara about the making of the film. All three bands also feature heavily in our regular episodes of Retrosonic Podcast and in our next episode we will play the new Galileo 7 single and we also have an exclusive play of the forthcoming  single by The Len Price 3.