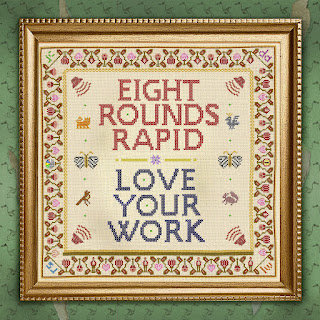 Eight Rounds Rapid have just released their third album "Love Your Work" on the excellent German label Tapete (Robert Forster, Monochrome Set etc) and it shows the band taking a big leap forward, broadening their sound and horizons quite impressively. They've seemingly taken the feel of "Johnnie Ray" and "Reverse" from previous album "Objet D'Art" as the template for this new set of songs and while there's undoubtedly less of the full-on cranked-up R&B of their previous releases, it doesn't mean the band have smoothed out any of their edges. Not a chance. If anything "Love Your Work" is more challenging and spiky than ever before. But don't worry, while the album will no doubt appeal to a much wider audience, there's still plenty of those classic trademark ERR sounds to keep all you existing fans more than satisfied. "Love Your Work" is visceral and hypnotic and is packed full of David Alexander's wry observations on the state of our nation. He has the knack of elevating the mundane minutiae of life in Brexit Britain superbly and it's difficult to say where lyrics stop and poetry starts. Opening track "You Wait" sets a scene that's full of simmering aggression and tension and it's this theme that runs throughout the entire album. The song's protagonist seems to be trapped in one of those endless call centre scenarios, waiting impatiently, trying to get through, stuck on hold probably listening to awful piped music "he's in a meeting, can I take a message?" You can feel him gradually unravelling as the "you just wait" mantra twists into the ominous threat of "you just wait!". The threat of violence permeates "Love Your Work" and nowhere is this more apparent than in "Passive Agressive". This is what I would call a classic Eight Rounds Rapid song in that it distils all that is great about the band into a two and a half minute adrenaline-fuelled blast. It places you squarely in the heart of a low-life low-rent criminal fraternity and you can visualize small time drug deals with fidgety thugs in pub toilets - "don't look at me funny, I gave you the money". It's driven along on a blistering guitar riff before the song breaks down into a frantic argument - "there's no negotiation, there's no fucking money you slimy little prick". It's one of the best songs the band have written. Luckily the tension lifts a bit with the next song "Love Don't" which is pretty much a Bluesy swing number with Simon Johnson's guitar whizzing all over the place, floating above Jools Cooper's fluid basslines and Lee Watkins superb jazzy drumming. It proves my theory that they are among the best rhythm sections around at the moment.

The switch of styles throughout the album is really what sets it apart - quite a few of the songs are almost like atmospheric mini-movie soundtracks, initially based around the foundation of the drums and bass with Simon's inventive playing setting the scene for David Alexander's evocative lyrics/poetry. Then you get something like "Retro Band" with it's clicking drum machine and unsettling background noises that is as unusual as it is addictive. David Quantick compared the band to Sleaford Mods in a recent review for Classic Rock magazine and after listening to this track I can kind of see his point. It's not just the backing track they use in "Retro Band" but the way both acts are using their local vernacular to shine a spotlight on the current state of our nation, warts and all. Another example of this shift in sound would be the hilarious "Onesie" which near as damn it, nails today's popular so-called culture succintly with it's simple mantra of "I took a selfie in my onesie". It's a jittery avant-garde Jazz blast with some wicked sax from George Cleghorn that reminds me of the late 70's New York No-Wave scene. "Letter" is one of my favourites on the album, a slow burning song with some great choppy ryhthm guitar. Is it a love song for the Coronavirus times? At first I thought so - "when this is over, when this is through, I'm gonna write a letter to you, I'm gonna make it better for you". However, this is Eight Rounds after all and the sampled atmospheric strings and creepy voice in the background makes you wonder if it's actually something slightly more sinister. "Future Estates" is an absolute classic where David Alexander's idiosyncratic half-spoken vocal delivery of his stunning street poetry clicks perfectly with the musical soundtrack. It's so evocative. You're immediately transported to kicking-out time on a Friday night in provincial Brexit-Britain, waiting in a taxi rank in the pissing rain trying to avoid the seething aggression from the "ragamuffin street urchin toerags" all around you. It conjures up images of dodgy tattoo parlours, botox and nail bars and raucous hen and stag parties - "ticket tout lash out lip pout fell out..." Not only does the song boast what I think are David's best lines yet, it also features some unbelievable guitar from Simon - he mangles the strings just like Pixies' Joey Santiago, cranking up the tension almost to breaking point. What a song. "Tricks" is a return to the old-school ERR sound of rough and ready Canvey Island R&B that you've come to expect from the band. It's topped off with a superb harmonica solo and is probably the closest the album gets to what you might call a traditional Rock & Roll song. However, "Mirror" changes the feel again with its lovely shimmering guitar textures reminiscent of Wire's Bruce Gilbert around the "A Bell Is a Cup Until It Is Struck" period. 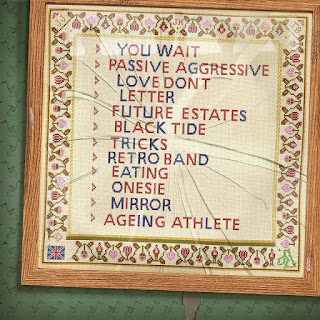 There aren't really any other contemporary bands I can think of like Eight Rounds Rapid, they're impossible to pin down or categorize. I mean, their uniform of black suits, white shirts and skinny black ties harks back to classic late 70's/early 80's Power Pop, that most innocuous and feelgood of musical genres. But there's certainly nothing innocuous about Eight Rounds Rapid and not a lot of feelgood (excuse the pun) if truth be told. After all, the band look more like a bunch of bouncers outside a local neon-lit boozer than some frothy New Wave band. It's not easy-listening that's for sure. Their music is challenging and thought-provoking and sometimes it can drive you to distraction just like the best Krautrock and Post-Punk bands have the tendency to do. Sure, there are bits of The Fall, early Talking Heads, Can and Public Image Ltd, maybe not musically, but in the way they push the listener to the edge of their comfort zone. However, when you get it you really get it and it's ultimately rewarding. I sometimes wonder if there's a grand plan behind Eight Rounds Rapid. Some of their press releases and statements are challenging, sarcastic almost, are they taking the piss or what? Are they a parody, some kind of Anti-Rock art statement or are they just four Essex blokes who like to get together and kick up a goddamn almighty racket? A bit of all I suspect. But in the end you can do all the theorizing and pontificiating you like, the bottom line is it's music that hits you in the guts, smacks you in the nose but then makes you wonder just what the hell is coming next from Eight Rounds Rapid. I have no idea but I'm certainly looking forward to finding out.


You can hear "Passive Agressive" from "Love Your Work" in Episode 39 of Retrosonic Podcast.

Retrosonic Podcast · Episode 39 "Be Seeing You!"

Useful Links: For more information on Eight Rounds Rapid check out their web-site here or their Facebook page here. "Love Your Work" is available to buy here from Tapete Records. Thanks to David Alexander. Thanks to Sidewinder DJ David Edwards for being the first to tip me off about the band at the very start. Thanks to Mondo & Piley at Radio Podrophenia. They released the band's debut single "Writeabout" on their own label. Hello to all at The Railway Hotel, Southend-on-Sea. One of the U.K.'s best independent Pub Venues where Eight Rounds Rapid played as part of one of our joint Retro Man Blog/Podrophenia Nights. Band photo by Paul Hughes.