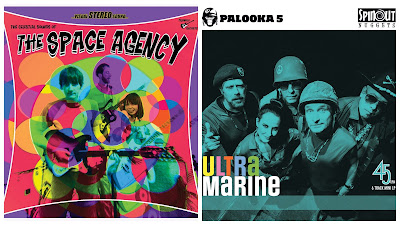 - The Space Agency "The Celestial Sounds Of…" (Tremolo Records)
These Brighton based instrumentalists formed out of a serendipitous meeting in 2002 (see bangbang.music.blog for the whole story) and now present their fifth (but first vinyl) LP of 'out of this world instrumental sounds’. The thing I really love about a good instrumental LP (and I do LOVE a good instro) is that the music tells the story without those pesky things called lyrics getting in the way, thus allowing the listener to set their imagination free, and because this LP is fully instrumental (unless you count the chattering birds) there is a requirement to keep things fresh and somewhat varied, which of course The Space Agency do with aplomb. In their owns words they offer ‘music and sounds inspired by places, avian disputes, descriptions of sound, nature, cravings, spicy Eastern foods, other worlds, euphoria and glittering galaxies of nonsense & stupidity’. 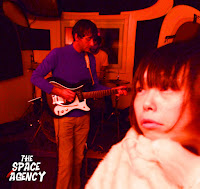 Make no mistake, this is an album packed full of all of the above and held within a retrofuturistic context. There may be fads in instrumental music, for example the third wave of Surf with it’s heavy metal connotations and booming basslines, which honestly leaves me stone cold. I prefer a sound that is in keeping with the rawness, energy and experimentation of the original masters, and mistresses. Another thing that endears this LP to me is that I can hear the distant waves of Japan throughout, so much so that I swear it’s Kayama Yuzo playing his Mosrite on "Teringo". "Bombay Potatoes" takes us to South Asia with it’s psychedelic fuzzed-out sitar sounds. "The Devil’s Saddle" evokes the sound of Mr Space Age Pop himself, Joe Meek (we are not worthy), and as hard as it is to choose a favourite track from the LP, this is one of them. So here it is, The Space Agency presents "Celestial Sounds of The Space Agency". What else can one say except superlunary! - Ms Sheringham-Boom (August 2020)

- Palooka 5 "Ultra Marine" LP (Spinout Nuggets)
With a bent for dressing like extras from Apocalypse Now, the Palooka 5 certainly aren’t the fools that their name suggests. With regular airplay already secured on Radio 6, they return  with a follow up to 2018’s "Rough Magic" in the form of mini LP number two "Ultra Marine" this time on the Spinout Nuggets label. Based in the heart of Somerset, the Palooka 5 have broken out of camp and made it to London (which is no small feat) and have done the rounds of a few festivals to boot; a wealth of gigs under their camouflaged belts. Hopefully the other boot will propel them further afield into Europe, the US and beyond. Despite the difficulties that 2020 has presented, with no live gigs since April and an uncertain future for grassroots music venues, I admire theirs and the label's ‘the show must go on’ spirit. Actually, it’s perfect timing because we, the people, definitely need a shot of this upbeat Garage-Surf-Pop conglomeration to brighten up the current climate. 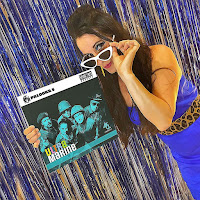 So, just what is it the Go-Go girls are getting their tassels in a twist about? Well, to start, title track "Ultra Marine" comes on like The B-52’s kicking the whatsit out of "Rockaway Beach". Yes, I know every man and his dog uses that comparison when there’s a female vocalist in a band with a certain twang or fuzz, but in this case it’s actually true. I’m grateful that we get to hear more of Mrs BE Baigent other than the backing vox and maraca shaking she so deftly dispenses. It’s my favourite track of the eight for sure.  Other tracks such as "Possession of the Surf Tsar" (it’s where you’ll find the Cossack-tion), and  "Missy Mousetrap" which conjures up mid ‘60s Californian Garage R&B at its very peak, are just a few of the stomp, shout and work it on out numbers on this mini but majestic offering. A great balance of vocal and instro with some crackley radio bits thrown in for fun. If this record doesn’t sell out quickly then the world truly has gone AWOL. - Ms Sheringham-Boom (August 2020)


For more information and details on how to buy the albums please check out the following links:

Ms Sheringham-Boom is the bassist in Edinburgh's premier purveyors of Garage Rock, Thee Girl Fridays. You can hear a great track from Palooka 5 in Episode 38 of Retrosonic Podcast.