Ms Sheringham-Boom with a Round-Up of New Releases from Fleur, The Voo-Dooms and Surf Muscle 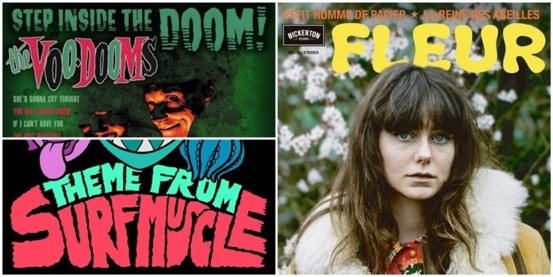 The Voo-Dooms "Step Inside The Doom!" Mini-LP on Spinout Nuggets - Following 2018's debut "Destination Doomsville" LP on Trash Wax Records, last year's "And It Goes Like This…" EP on Spinout Nuggets, and many gigs later, The Voo-Dooms are back from the grave, if you will. Not that they have been dormant for that long, but I have been looking forward to hearing this new offering and have been following the recording progress from Ranscombe Studios in Kent (thanks to social media). I must admit, a large part of the excitement was because I had heard that the Doomettes, Mary Tee and Jo-Jo A Go-Go, were to be involved. "Step Inside The Doom" opens with "Stop Haunting Me" which is SO darn catchy it catapults me right back to my early teens when I was hearing Garage, Beat and/or Trash (as it was called back then, yes I’m old...) for the first time. 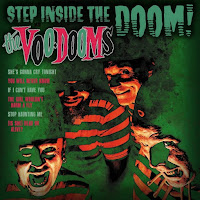 Ah, that life changing moment, if only it could be bottled. Well maybe it has been? The theme continues with "She's Gonna Cry Tonight" a song about dumping a girlfriend, but he does not care and he’s gonna let her know - no no no no no NO! Ouch. "If I Can’t Have You" is a short but melodious affair which could tie in with the aforementioned track and there’s more 'No's' than you can shake a stick at, but this time the track has the added deliciousness of the Doomettes which undeniably elevates their sound. "She Wouldn’t Harm A Fly" is segued in with a voice clip from the 1960 film Psycho, which aptly sets the scene for the closing track "Is She (Dead Or Alive)?". It has that haunting "Johnny Remember Me" feel to it, furnished with Theremin from Jo-Jo A Go-Go. This is a monstrous (in the affirmative) record, and I expected no less. The Voo-Dooms are who they intrinsically are; song-makers, performers, enamoured by vintage horrors and writers of lyrics that evoke a knowing and wicked smile. One cannot deny their clearly overt (thanks again social media) influences. The overall sound pays homage to bands such as The X-Men, The Clapham South Escalators and The Sting-Rays to name but a few. Those and the thousands of musicians who recorded the most horrible hidden gems during the mid-century. My only slight disappointment was that I would have liked to have heard more of the Doomettes integrated in these six tracks. Maybe it’s time to start their own band, what do you think? 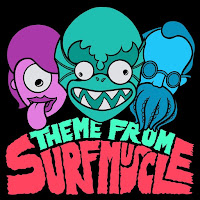 Surf Muscle "Theme from Surf Muscle" b/w "Hall of The Mountain King" (Sonido Polifonico) - Surf Muscle present their second single, a follow up to 2018’s "Revenge of The Pencil Necks" entitled "Theme from Surf Muscle" which is a quirky, mid-tempo instrumental offering from Sheffield’s, nay, Earth’s finest Surf band. This is available as a limited-edition lathe cut on clear vinyl, of which I have very generously been gifted No 13 out of 57. Lucky for me! It is always such a pleasure to receive their records because they are DIY in the truest sense. The front sleeve art conjures up cute '60s B-Movie terrors from beneath the sea, whilst the back features the band in an '80s video game. All artwork lovingly created by Guitar Muscle himself aka Oliver Allchin. "Theme From…" whisks me away to a swinging sorority beach party circa 1964. Cut to the resident band in their matching striped regalia, who carry on playing as a groaning monster staggers heavily out of the water draped in seaweed towards the bikini wearing girls, knocking over the rum laced punch and swiping at the incompetent Frat boys. Who can save the teens from this deep-sea terror? The band of course! Drum Muscle beats the monster with her sticks, Bass Muscle mesmerises him with hypnotic pulsations, and Guitar Muscle finishes him off with brain-frazzling reverb. "Hall of The Mountain King" is an instantly familiar tune and synonymous with the video game but the Muscle’s take on it is double the fun because they mix it up with another recognisable melody. Since their first release, the band have gigged around the UK and Drum Muscle, aka Katherine, also has a Garage Punk band with Missy Tassels of The Sleazoids called The Mean Girls Club, go check them out too at their Bandcamp site here. They also run a night in Sheffield called The Green Slime, a club for greasy finks and fiends serving Garage, Surf and trashy Rock ‘n’ Roll. 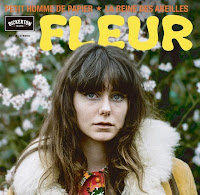 Fleur - "Petit Homme De Papier" b/w "La Reine Des Abeilles" (Bickerton Records) - "Petit Homme De Papier", in English "Little Man of Paper", is a very welcome follow up to Fleur’s excellent debut single of 2019 "Mon Ami Martien". It is just as sweet, sultry, swinging and seductive as it’s predecessor. Quintessentially Yé-Yé "Petit Homme De Papier" is full of sunshine and flowers, tinged only with a little sadness et voila! It’s the kind of pop perfection that could have been lifted straight from the Eurovision Song Contest circa 1966. Do check out the dreamy video for this single below which features our chanteuse and her familiar looking paper lover. Sigh, we’ve all been there. The more garage-y of the tracks "La Reine Des Abeilles" (Queen Bee) is my favourite of the two. It is buzzing with fuzz and like the life of a bee it is short but meaningful with a sharp sting if aggravated. All tracks were written, recorded, and produced authentically by Arjan Spies & Dave Von Raven (both of Les Robots) at Studio Teepdek, which may give you an idea of the quality you can expect here.


You can also hear a track from Fleur and her other band The Colour Collection in Retrosonic Podcast Episode 39. Please click on the highlighted links for infomation on the bands and how to buy the featured records. Ms Sheringham-Boom is the bassist in Edinburgh's premier purveyors of Garage Rock, Thee Girl Fridays.