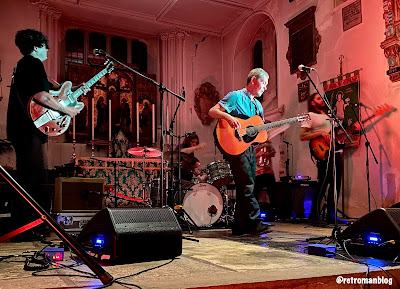 This was the third time to see Michael Head & The Red Elastic Band in London this year and each show couldn’t have been more different yet all were equally as memorable. First of all, back in May we squeezed ourselves into the tiny packed out basement bar of the Heavenly Social where only drummer Phil and guitarist Nat accompanied Mick. After this show, the crowd filed out of the venue and followed Mick to a nearby pub to watch Liverpool in the Champions League Final. Then in June we went along to the superb 2,000 capacity Shepherds Bush Empire where we were treated to a full-on eight-piece Red Elastic Band line-up including brass, woodwind and cello to hear the songs from  the new album “Dear Scott” in all their glory. Then it’s another change of direction for tonight’s intimate show at the St. Pancras Old Church, the grounds of which were used as a photo shoot location by those other Scouse musical legends The Beatles during their 1968 “Mad Day Out” jaunt around London. The grounds and the church itself are stunning and we’ve got front row seats although I was a bit disappointed to find out they weren’t pews though. It’s as though Mick and the band are right there in your front room, well that is if your front room just happens to be a chapel that pre-dates the Norman Conquest of course. It really is a beautiful setting and Mick seems taken aback “I know we’re standing on gravestones but I’m sure it’ll be OK” he says, the stained glass window above the altar behind him adds a suitably ecclesiastical backdrop. 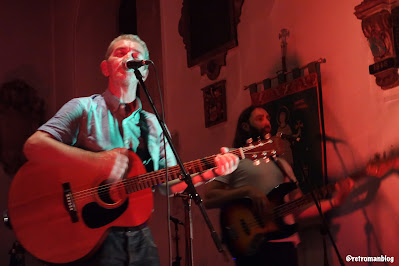 It’s great that Mick doesn’t just follow the routines of the traditional touring circuit, it’s as if he’s determined that each gig be treated as a very special one-off event, something to be treasured and remembered. The flexibility that he has carved out for himself since Shack’s indefinite hiatus is admirable, he’s working on his own terms so seems to be able to escape the pitfalls, pressures and clichés of the corporate music industry and that’s such a rare commodity these days. Tonight’s line-up of The Red Elastic Band features Nathaniel Cummings on guitar, Tom Powell on bass, Phil Murphy on drums and Martin Smith on trumpet, but unfortunately guitarist Danny Murphy is missing as he’s currently on tour with Jamie Webster. The band kick off with “Gino & Rico” from the new album "Dear Scott" and the sound is surprisingly excellent – I say surprising, as Church’s tend to work best for acoustic or orchestral performances but rarely for a full-on Rock band. However, tonight it really works and the impressive acoustics really highlight the nuances of Mick’s intricate songs. I do notice that Phil has dampened his snare drum with what looks like a tea towel but otherwise, the band put as much into the performance as if they were on the stage of a large traditional Rock venue. Tonight’s set consists of a dip into most aspects of Mick’s musical career post-Pale Fountains so we get “Undecided” from “Waterpistol”, the always emotional “Comedy” and a blistering “Pull Together” both from “H.M.S. Fable”. “As Long As I’ve Got You” is the choice from “Here’s Tom With The Weather” and then there’s the superb “Something Like You” from “The Magical World of The Strands”.
The now classic “Newby Street” from The Red Elastic Band’s debut E.P. “Artorius Revisited” raises the tempo and temperature with Martin blasting out that insistent trumpet riff. Then of course, there’s a large chunk of the current critically acclaimed Bill Ryder-Jones produced album “Dear Scott” which has raised Mick’s profile to heights not experienced since the peak-Shack era of the late 90’s/early 2000’s. In fact, as much as I love Shack and in particular John Head’s guitar work, I don’t find myself longing for a reunion anymore as the quality of the new songs and the excellent chemistry between Mick and the Red Elastic Band members certainly stops you getting all nostalgic. Rather like Ebbot Lundberg did when The Soundtrack of Our Lives split up, Mick has surrounded himself with super-talented younger musicians who don’t only do justice to familiar classic songs but they manage to inject their own personalities and styles into the music. Interesting that both front men decided to cherry pick the nucleus of already established bands, Ebbot from the Stockholm based Side Effects to form The Indigo Children and Mick took from The Peach Fuzz, augmenting them with other musicians to suit. They both seem to understand that the dynamic and chemistry of a band works far better than any bunch of assembled faceless session musicians will ever do and The Red Elastic Band embody this, all have their own characters which really helps them connect with the fans. Phil is a really great drummer, navigating the twists and turns and sudden tempo changes of Mick's songs perfectly. When he's not playing trumpet Martin spends his time dancing away in the background and in front of him, bassist Tom Powell grooves away, long hair swaying around him as he immerses himself in the music. Guitarist Nat is a bit of a star, after all he is the frontman of The Peach Fuzz and his guitar playing is superb, especially tonight as he has to cover for the absence of Danny. It can't have been easy for both of them having to follow in the footsteps of John Head but they have both excelled. Not only are they all great musicians but they are great guys too as was proven by their concerns over the health of one of their biggest fans Ann. In fact, Mick dedicates a song to her tonight and the band make sure they all sign a set-list to present to her at the next opportunity, it’s such a nice touch of class. 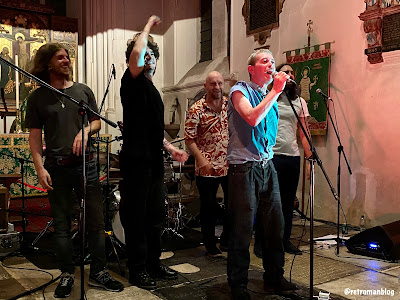 There are too many highlights to mention, but the vocal version of “Shirl’s Ghost” is truly beautiful and it’s strange that they only included a short instrumental take to close “Dear Scott”, it’s almost as though that was put there as a tantalizing trailer for the next album. New song “The Human Race” is a cracker, it’s more of a powerful straight-ahead rocker than the material on “Dear Scott” and Nat’s guitar work is immense. As the song builds to a climax, Mick drops to his knees thrashing away on his acoustic guitar hunched over and as the song finishes he realizes he’s kneeling on a gravestone and I catch him put his fingers to his lips and blow a kiss in way of respectful apology. It’s this church thing, it seems to be making everyone come over all saintly. However, Mick just can’t stop swearing and each time an expletive escapes he cringes and says “sorry” as if a big bolt of lightning is going to flash from above and strike him down. “I blame my Ma,” he says, “She was always swearing” and then corrects himself, “sorry Ma” with a glance to the heavens. The set closer “Meant To Be” is almost like a cathartic experience when  the crowd take over the main riff singing along and turning it into something akin to a football chant. Mick even joins in as he and the band take a bow and lap up the well-deserved applause. They are called back for an encore and we get the excellent “Stranger” from “Waterpistol”, but then it’s all over sadly despite the calls for more. So, another memorable night in the magical world of Michael Head and The Red Elastic Band and I'm already looking forward to the next adventure. 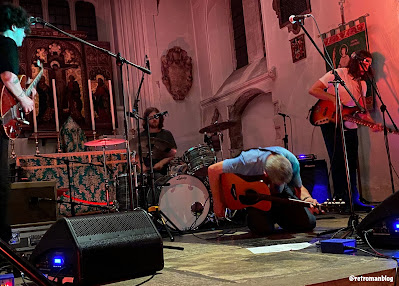 Special mention for tonight’s support act, the engaging Harry Tonks who went down really well with the crowd and was a perfect choice to get us in the mood for Mick. Harry was joined on stage by Mick’s sister Joanne for a cover of The Civil War’s “20 Years” and his own “Community Church” before which Harry commented that he’d always wanted to play the song in a church. Anyone who has seen Joanne sing "Daniella" with Mick at recent shows will know she has a wonderful voice and her appearance was a real highlight. Harry introduced a new song “Middle of The Night” with self-deprecating humour, saying it was a difficult one to play and he wondered why he always made things difficult for himself. Indeed the intricate guitar work was pretty mind (and finger) bending and it reminded me of none other than The Strands. Harry has some excellent songs and a great voice, free of the gimmicks and affectations of many modern day singer songwriters and I look forward to hearing more from him in the future.
For more information on Micheal Head & The Red Elastic Band please check out their official website here. You can find out more about Harry Tonks here and you can see more videos of the show at our Retro Man Blog YouTube channel here. 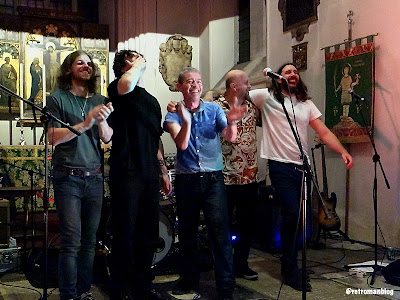