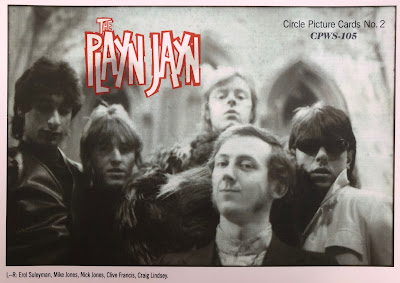 If people ask me which was the best live band I ever saw, I can say at the drop of a hat that The Playn Jayn were definitely one of them. Sadly, the most common response to my answer is "who?" On one hand, it's disappointing that this most special of bands never really "made it" and certainly never received the acclaim they truly deserved. However, on the other hand I can allow myself a wry smile and bask in the knowledge that I was lucky enough to witness The Playn Jayn in their glorious prime. I remember clearly being blown away by the unusual spectacle of two live-wire lead singers and frontmen which added an air of unpredictability to their gigs. The chemistry between Craig Lindsey and Mike Jones and their vocal harmonies were a joy to behold. Behind them, the band featuring Nick Jones on guitars, Erol Suleyman on bass and Clive Francis on the drums were tight, powerful and stripped back, allowing the immense melodies and ringing riffs to shine. They were rooted in the Psychedelic 60's but had that Garage Punk intensity that meant they appealed to a wide cross section of music fans of all the varied underground genres at the time. At the much-missed Hammersmith Clarendon they shared the stage with many diverse bands from The Prisoners and The Adicts to Sunglasses After Dark, The Long Ryders and Twenty Flight Rockers and went down equally well with all of their respective audiences. I can clearly remember one night at the Lyceum where they played with Lords of The New Church and Wall of Voodoo and that still remains one of my favourite all-time gigs to this day. 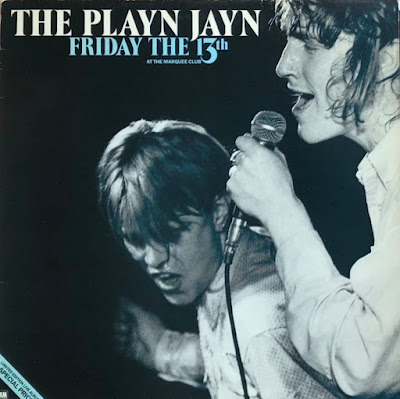 But I suppose The Playn Jayn will forever be associated with the Marquee, mainly due to their classic 1984 debut album "Friday The 13th at The Marquee Club" which was released by the major label A&M, who took the unusual step of releasing a live album for the band's debut. Unusual yes, but actually this was a smart move as the brilliant production by Vic Maille captured all the band's live energy perfectly - very rare with official live releases. It also meant that the album sounds immense today, fresh and exciting, bursting from the speakers and completely free of all the terrible studio gimmicks and over production of the early to mid-80's that ruined so many great records of the time. This was unfortunately to come next, as the follow up studio album "Five Good Evils" disappointed me after the raw excellence of "Friday The 13th" and I felt that the songs were half-buried under a weak production. A&M obviously didn't have a clue what to do with the band and the album was put out on their "Indie" subsidiary ABC records. 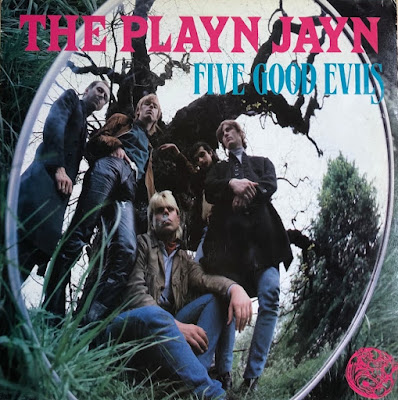 They released a couple of singles including the excellent "Juliette" but the band sadly called it a day not long after. The Jones brothers continuing as The Jayn and Erol joined The Jazz Butcher. Mike then sang with The Other Side but by the early 90's all of the members had pretty much disappeared from the music scene. They never resurfaced, there was certainly no reunion and then the terribly sad news filtered through a few years ago that Craig had passed away. For a band that blazed such a short lived trail they certainly made a significant impact on those of us lucky enough to have seen them play live - or even those who had just heard the records. The memory of the band has been kept going by the enthusiasm of fans such as Desmond Behan and Julian Leusby and those at the Playn Jayn fan's group on Facebook, which can be found here. 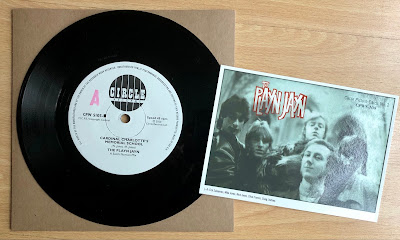 But the good news is that long-standing devotion has now been rewarded as Peter Wild at Circle Records has pulled off a remarkable coup by releasing this gem of a 'new' single that will not only be welcomed with open arms by existing fans but will also prove to new listeners just what a special band The Playn Jayn were. The 7" vinyl single will be released on 16th September as a limited edition of 375 individually hand-numbered copies and contains two previously unreleased songs by the group, the last recordings they ever made. There's usually a reason why songs remain unreleased and that is they are generally not good enough, so it's very rare that these two tracks from 37 years ago could well be among the finest the band have recorded and I was blown away by the quality of the songs and the sound of the single. So, a bit of background to the single from Circle Records - The Playn Jayn went into RMS studios in London with producer Andy Le Vien in April 1985 and recorded  two songs for a possible single to hopefully drum up interest following their departure from A&M. They chose the regular show-opener "Cardinal Charlotte's Memorial School" and the slightly newer "It's Not Me". Unreleased after 37 years, rescued by Desmond Behan and mixed by Satch Norton who did live engineering and studio work for the band including the "Friday The 13th" album and the rare white label 7" single "Chamber Door". There's more good news, Circle Records are also looking into the possibility of compiling a selection of rare demos and live recordings for future release, it's not sure yet on which format this will be so I'd recommend subscribing to Circle Records on their social media for updates. Of course, we'll also keep you informed as soon as we have news. To enquire about the new single, please message Circle Records for more information on how to order or check for updates at their eBay page. Otherwise why not drop by and say hello at the Playn Jayn Facebook group here. 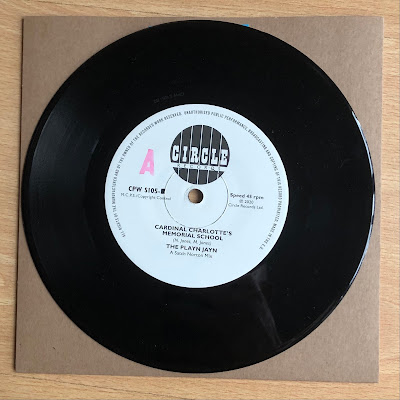