"Good Vibrations" is the heartwarming and uplifting true story of Belfast music legend Terri Hooley, the man responsible for discovering The Undertones and recording "Teenage Kicks". Terri is a radical, rebel and music lover in 1970's Belfast, when the bloody conflict known as The Troubles shuts down his city. As all his friends take sides and take up arms, Terri opens a record shop on the most bombed half-mile in Europe and calls it Good Vibrations. Through it he discovers a compelling voice of resistance in the city's nascent underground Punk scene. Galvanising the young musicians into action, he becomes the unlikely leader of a motley bunch of kids and punks who join him in his mission to create a new community, an Alternative Ulster, to bring his city back to life.


Richard Dormer puts in a stunning performance as Terri Hooley, expertly portraying the wide-eyed, sorry make that, wide-one-eyed, almost childlike enthusiasm and passion for music in all it's forms, bursting with energy, ideas and scams. As Terri recounts in his excellent biography "Hooleygan", people think he was just into Punk but he was probably Northern Ireland's biggest Reggae fan and was first awakened to the joys of music by Hank Williams "I Saw The Light" at a very young age. It was that power of music to unite and uplift people that moved him to call his record store "Good Vibrations" right slam in the middle of a place where good vibes were a very rare commodity. A radical and politically driven hippy in the Sixties, he was constantly demonstrating and campaigning against whatever injustice he saw in the world at large, "Hey Terri, what are you rebelling against?", "whaddya got?". Although wary of aligning himself to any particular party or movement for long, mainly due to his somewhat maverick approach, he managed to take this neutrality and outsider persona into the dark days of the Troubles. In fact it's the unifying spirit he found in the Northern Irish Punk scene that inspired him as much as the music - Protestants and Catholics braved the curfews to go to gigs together and this created a camaraderie, united against the religious bigotry, paramilitary violence  and the brutality of the R.U.C. All this played out on Belfast's war-torn, dangerous streets, something that the Punks in London, safe in the boutiques of Chelsea's Kings Road, could not even comprehend.

Intrigued by punters coming into his shop asking for records with strange and violent names, he is persuaded to go and see the band RUDI. Terri enters the venue and finds himself amongst the crowd of Punks and he slowly lets himself go, lost in the euphoria he ends up joining in the pogoing. I'm not sure a film such as "Good Vibrations" would ever get anywhere near the Oscars, but Dormer certainly deserves one for this scene alone. Terri is so inspired by this Rock & Roll epiphany that at the end of RUDI's set he rushes over and offers to sign them up on the spot despite not having a label at all. It's this naive enthusiasm and total disregard for money, contracts and business acumen that makes Terri such a likeable and inspirational character. He then, rather reluctantly at first, signs up The Undertones from Derry, but as soon as he hears "Teenage Kicks" he releases it on Good Vibrations Records, convinced it will be a massive hit. The scenes where Terri desperately shops the single around London are magnificent, faced with the utter cynicism and disregard of record company moguls (in his book, he admits even Rough Trade turned him down), he is distraught. Only John Peel is impressed, and historically played the song twice in a row on his influential late night radio show much to the delight of Terri and his friends back in Belfast.

It all goes a bit wrong for Terri from there, he famously signed away the rights for "Teenage Kicks" to Sire Records for the price of a new van and his failure to get RUDI's single released in time for a high profile TV appearance sees the band lose patience with his haphazard business planning. He has to close the doors of Good Vibrations due to mounting debts and then loses money on one of the biggest Punk gigs in Belfast due to the longest Guest List ever known. But the irrepressible Terri, with a gleam in his one good eye, will not be beaten and you are left with a feeling that another scam is just around the corner. The movie shines a light on some excellent and totally underrated bands such as RUDI and Terri's loyal helpers and friends The Outcasts, who he refused to manage as they had a particularly violent fan and a dangerous reputation. Of course The Undertones might get the attention, as they were the only Good Vibrations band to break through, but check out the brilliant Power Pop band Protex, or Ruefrex or The Moondogs...there's so much great, uplifting music to have emerged from such a troubled period, thanks mainly due to Terri Hooley.

Terri is still involved in music, he now has a new Good Vibrations store at 89-93 North Street, Belfast and he helped to set up the Oh Yeah Music Centre, a charity dedicated to helping local musicians, so he remains a truly inspirational figure for all those passionate about making things happen. His story can be followed in the fantastic book "Hooleygan", in which, written together with Richard Sullivan, Terri weaves his autobiographical musings alongside stories and tributes from other characters such as RUDI guitarist Brian Young, Greg Cowan from The Outcasts, journalist and broadcaster Stuart Bailie and Gary Lightbody. Good Vibrations was nominated for three Irish Film and Television Awards, and is the second film from "Cherrybomb" directing duo Lisa Barros D'Sa and Glenn Leyburn and is scored by David Holmes with a screenplay by Colin Carberry and Glenn Patterson. The movie was released via The Works. 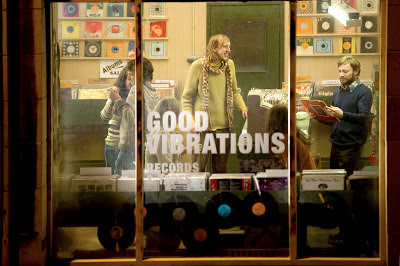 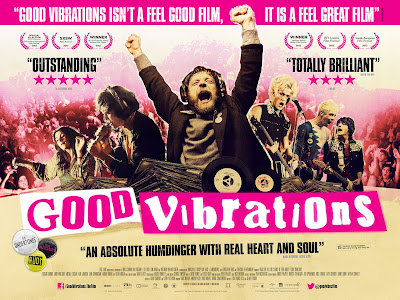 With sincere thanks to both Lucy Fleet at The Works Film Group for the film stills, and to photographer Paul Slattery for the superb, and truly evocative, black and white photos.


Check out Punkerama Records another Belfast based label that specialises in great vinyl picture disc releases from bands such as The Defects and Charlie Harper of the U.K. Subs' Harbour Rats project.