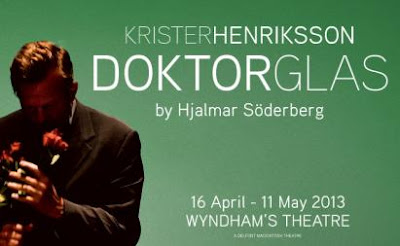 It was such a treat to get the rare opportunity to see Krister Henriksson, one of my favourite actors, appear on the London stage recently, performing in the one-man play Doktor Glas at Wyndham's Theatre on Charing Cross Road. Henriksson is the star of the Swedish crime TV drama "Wallander" and more recently the movie "Kiss Me" with Ruth Vega Fernandez, the wonderful actress from "Upp Till Kamp". When I mentioned to people I had seen the play, the general response was "oh, I bet that was depressing then..." and I suppose the subject matter of Doktor Glas - rape, revenge, jealousy, religious and moral corruption - doesn't do much to dispel the dark and brooding image that now immediately springs to mind following the success of Nordic-Noir crime dramas such as "Wallander", "The Bridge" and "The Killing". However, Doktor Glas is no contemporary crime story but is adapted from a 1905 novel by Hjalmar Söderberg, which at the time of publication caused outrage. 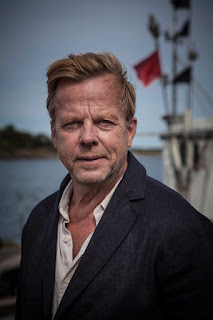 Henriksson puts in a quite remarkable performance as the Doctor which is not a million miles from his portrayal of Kurt Wallander, the slightly shabby and unhappy loner in his scuffed shoes and ill fitting suit, struggling to find companionship in middle age. An unassuming man who has a "pleasant way of keeping quiet", beaten down by the unfairness of life in general, where everyone else always seems to be having a good time except him. We learn that Doktor Glas is infatuated by one of his patients, the beautiful Helga, who unfortunately happens to be married to the loathsome and arrogant Pastor Gregorius, who's rasping cough and frog-like demeanour Glas mocks incessantly - behind the Pastor's back of course. It's these merciless impersonations that provides much of the comic relief in the play and certainly highlights Henriksson's consummate skill as an actor as he flits between the characters  with ease. The Doctor's hatred of Gregorius and his own self-loathing increase as he struggles with that age old challenge to the male ego..."what is a beautiful girl doing with such a repulsive man when she could have me?". Then one day Helga appears at the surgery and, probably well aware of the Doctor's infatuation, uses her charms to suggest a rather unorthodox plan. Fed up with her disgusting husband's demands for his "marital rights", she asks Glas to fabricate an illness of the womb to put off the unwanted advances.

Thinking that this might be a way to ingratiate himself into Helga's affections, Glas agrees and summons the Pastor into his surgery to explain the situation. Gregorius is furious but reluctantly promises to keep to the Doctor's advice. The promise isn't kept for long, a couple of days later Helga visits the Doctor to explain that the plan to keep her husband at bay had not worked as he had raped her. She also confides that another reason she no longer wants to have sexual relations with her husband is that she is in fact secretly having an affair. Doctor Glas realises that he knows her boyfriend, the handsome Klas Recke, and is driven into fits of jealousy. Klas Recke, the man who's looks he admired and wished he resembled - Klas Recke, Henriksson wrings every syllable out of the last name, seething with jealously, it sounds like the English word "wrecker" which is apt, considering Klas is the man who, in the Doctor's mind, stands in his way, wrecking his dreams of a romance with Helga. Then his thoughts turn to the Pastor Gregorius and the rape, the disgust and hatred toward this so-called religious man swells and he summons him to the surgery again. He takes great pleasure in telling Gregorius about an exaggerated heart condition, making the Priest squirm and suffer before announcing his diagnosis and instructing that a long trip to a Spa is in order.

That night Glas has a vivid dream where he exacts terrible, and surgical, revenge on the Priest, and Henriksson perfectly captures that fleeting moment when you wake up and think that the dream had really happened. Glas then goes from plotting and fantasising about murdering the Priest to struggling with his guilt, and he is tormented by thoughts of love, death and morality. Would you kill to take revenge on behalf of someone you love, or is it just a murder borne out of jealousy? What about the Hippocratic Oath? Should he take his own worthless life? Henriksson is a remarkable actor, I thought that anyone trying to perform alone would be full of grand, over exaggerated gestures to hold the attention of the audience, but not so, the subtlety in his performance was so impressive. The play ends with the Doctor finally administering a lethal pill, under the guise of medicine, to Pastor Gregorius and the curtains draw to a close to the strains of Lou Reed's "Perfect Day" - a deliciously ironic, if somewhat incongruous choice of song. The audience reaction was warm and polite rather than rapturous, I  rose to my feet to join in what I was sure would be a standing ovation. There wasn't one. I turned slightly and realised I was in fact the only one standing! Considering I was right at the front row centre of the balcony, I felt a slight twinge of embarrassment at first, but then again, why should I? I'm not a theatre-goer so I'm not sure of the protocol. Maybe it was because it was a matinee performance, maybe it's not the "done" thing, but all I know is that Krister Henriksson certainly deserved nothing less than a thunderous reception, a standing ovation and repeated curtain calls to acclaim a quite stunning performance.

So, you may be thinking "...what's a theatre review doing on the Blog?" Well, here's the thing, there is a link, an albeit somewhat tenuous link admittedly, to Krister Henriksson and my favourite Swedish band, The Soundtrack of Our Lives. So as a bit of fun, here we go...six degrees of separation...

1. Krister Henriksson starred in a 2009 TV movie of Doktor Glas directed by Mikael Marcimain.
2. Mikael also directed Krister in two Episodes of Wallander Series 2, "The Ghost" and "The Heritage".
3. Ruth Vega Fernandez featured in "The Heritage" and also starred in the movie "Kiss Me" along with Krister.
4. Sverrir Gudnason featured throughout Wallander Series 2 as new police recruit Pontus and both he, and Ruth, went on to star in the Marcimain directed TV Series "Upp Till Kamp".
5. "Upp Till Kamp" also featured Ludwig Dahlberg, Kim Fransson and Mattias Bärjed from the band Free Fall, who had a song played in an episode of Wallander. Mattias also wrote the soundtrack music to "Upp Till Kamp" and Marcimain's latest movie "Call Girl".
6. Mattias was the guitarist with The Soundtrack of Our Lives.

﻿Krister Henriksson has an official Facebook page brilliantly organised by Karen Gillett, so please join the group here for all the updates, including news on the brand new series of Wallander.