The Rezillos + SpizzEnergi: Live at 229 The Venue April 26th

The Rezillos long-awaited return to London took place at 229 The Venue at Great Portland Street, I'd never been here before and to say it was an unusual place for a gig is not an understatement. I wasn't the only one who had problems finding it either as there was a procession of confused looking Punky types walking up and down Great Portland Street, bewildered by the strange numbering system of the buildings. I went into two different pubs before some kind soul directed me - "It's across there, just round the corner of Pizza Hut" - ah, there it was, a large entrance with a big neon 229 over it - I went to enter but was stopped by a bouncer - "Who are you here to see?", "The Rezillos", "Not here mate", "What..? Are you kidding?", "No, it's just over there..." The actual entrance is what appeared to be a cross between a youth hostel and an office building. Inside the venue itself is large, quite a good room with a bar right at the back and the sound desk set tucked in one corner, giving an excellent and unobstructed view of a rather high stage.

Photographer Paul Slattery and I made our way backstage and managed to have a nice chat with original band members Eugene, Fay and drummer Angel Patterson and also guitarist Jim Brady as they warmed up before the show. It was a great opportunity for Paul to catch up with a band that he hadn't seen since photographing them live at the Music Machine way back in 1978.

I managed to catch the last half of the set by SpizzEnergi and they played a blinder, and I mean that quite literally, as Spizz is covered head-to-toe in reflective logos and flashing LCD belt buckles. All of this, together with his shock of spiky bright blonde hair, means it might be a good idea to take some shades with you to your next Spizz gig. He's a live-wire front-man and puts on a great show, eyes smudged with mascara, he does look like he's been beamed down from some sort of flying saucer attack. Spizz has also gathered a great band around him, including guitarist Luca from The DeRellas, and they really inject a bit of sleazy glam Punk & Roll into proceedings. "Soldier Soldier", "Red and Black", "Spock's Missing" - all go down a storm with the packed out venue. But of course it's one of Punk Rock's best ever 7" singles, the classic "Where's Captain Kirk?", that sparks off the biggest response, and tonight it's so good it's almost worth the price of admission on it's own.

Time for The Rezillos, and I managed to take a few pics from behind the stage and then went down to the front to take some more photos. This was not easy - the stage must have been about six and a half feet high and the rather dour bouncers would not let you touch the stage, let alone put your beers, or even your coats, on it. A few people around me were getting irate with their attitude and petty behaviour and later, after a bit of a confrontation with some exuberant but harmless dancers and pogoers - one of them appeared in front of me looking slightly dishevelled "I'm going to call the Police", he said rather shakily.

The band kick off with the fantastic "come-back" single "Out of This World", it's sometimes a brave move to start with a new number, but not when it comes to The Rezillos as the song's quality is such that it stands up perfectly well to the classic "Flying Saucer Attack" that immediately follows. The stomping "Mystery Action" and "Getting Me Down" keep the crowd on a high as Fay and Eugene trade vocals and stalk the stage, looking remarkably good as if they have been cryogenically frozen in time by some advanced being from one of their much-loved flying saucers.

Then we get new song "Life's a Bitch" and their latest single "Number 1 Boy", both songs again proving that the band can write new material that, not only does them proud but leaves us fans with the enticing prospect of a cracking new Rezillos album to look forward to. "2000AD" and "It Gets Me" crank up the fantastic atmosphere another notch and a really great new number "So Deep" sounds like it could be a classic.

Of course Fay and Eugene's wonderful double act is the main focal point, but guitarist Jim Brady gets in on the act, throwing shapes and attacking his guitar with a real energy and a big grin. Drummer Angel Patterson and bassist Chris Agnew are more low key visually and let their playing do the talking - but those familiar bouncing bass runs and quick-fire drums are still a vital ingredient in The Rezillos sound. One of those classic bass-lines introduces "(My Baby Does) Good Sculptures", surely one of the best B-Sides ever, and this is followed by a manic "Bad Girl Reaction" and then it's the crowd favourite "Top Of The Pops". The Rezillos always traded in idiosyncratic cover versions such as their takes on Mersey Beat hits such as  The Dave Clark Five's "Glad All Over" and Gerry & The Pacemaker's "I Like It", and tonight we get a spirited run through of "River Deep, Mountain High" by another charismatic duo, Ike & Tina Turner. The set ends with "Can't Stand My Baby" and the crowd go even wilder, shouting out the chorus, "It is uncool, Oh Yeah" Well, there's nothing uncool about The Rezillos that's for sure! That's it, the band leave the stage and I'm certainly not glad it's all over. There are enthusiastic calls for an encore and the band re-appear and blast through four more prime tracks "No", "Destination Venus", "Cold Wars" and of course there's "Somebody's Gonna Get Their Head Kicked In Tonight" which sparks off a mass outbreak of pogoing and shoving - the bouncers suddenly begin to look nervous again. 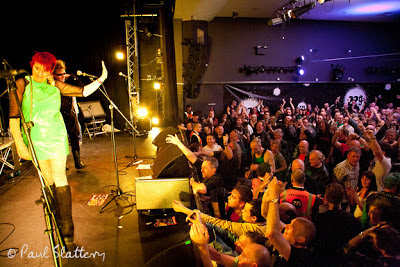 What a gig! It was even better than the last time I saw them at the Camden Underworld and I voted that as one of my best gigs of 2011. Tonight's show will certainly take some beating, the set was expertly balanced with all the excellent new songs blending in perfectly well, so the future looks bright for The Rezillos, positively Day-Glo in fact! Here are some more photos... 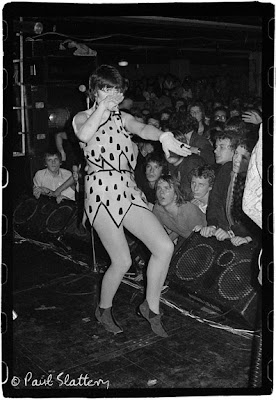 Thanks to Fay, Eugene and Jim and of course to Paul Slattery for the excellent photos, old and new. For more exclusive photos, including back-stage shots, "Like" the Retro Man Blog Facebook page here and check out the Rezillos + Spizz Photo Album.