The Transients live at The Rising Sun, Slough May 18th

I saw The Transients play a great set of unusual covers, and a couple of promising originals thrown in for good measure, at the Rising Sun in Slough. The band are singer Kieren, guitarist DC, drummer Freezer and bassist Mark Leech, who used to play in the excellent 80's Psych band The Onlookers. The Transients choice of cover versions could have been the playlist to one of our Retrosonic Podcasts as they included Radio Birdman, The Kinks, Pere Ubu and more top tunes.


The Transients kick off with a cover of "Cast a Spell" by the Putney based 60's Psych band The Open Mind, it's a great track and it's catchy chorus "...it's all in the mind..." snares some casual drinkers into paying a bit more attention. They follow this with Subway Sect's classic "Ambition" and then Wimple Winch's Freakbeat gem "Save My Soul", with Mark nailing the superb bass intro and guitarist DC capturing the stinging guitar riff perfectly. The song builds to a crescendo with drummer Freezer flailing away and vocalist Kieren letting loose. "i-94", a rare one from Australia's Stooges, Radio Birdman, is a nice surprise choice and then they mellow the mood with The Kinks "See My Friends".

There's nothing mellow about their great rip through Television's "See No Evil" though,  it motors along. Kieren straps on what looks like a vintage Vox guitar and joins DC in having an admirable stab at Tom Verlaine and Richard Lloyd's intricate guitar work. "Specs of Dust" is an original track and that and "Tube Ride Away" hint that The Transients could certainly move away from the covers in the future. The best of the originals however, is "The Hatfield Twins", which is about two early Punk King's Road faces who were apparently responsible for the "never mind the bollocks" catchphrase. It's an excellent Garage Rock track. I hope the band can get into a recording studio soon and get some of these songs released. Jonathan Richman and the Modern Lovers "She Cracked" is followed by a rather obscure choice of Small Faces track, "Up The Wooden Hills To Bedfordshire", and the set finishes with a raucous "Non Alignment Pact" and a great mash-up of The Vibrators "Whips and Furs" and The Only Ones "Another Girl Another Planet". It was a great fun night out and I recommend going along to catch The Transients live if you get chance. 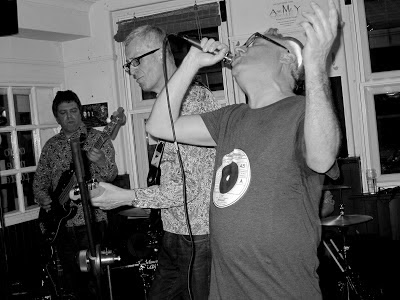 You can keep up to date with all The Transients latest news on their official Facebook page. Here's a video of their original track "The Hatfield Twins"


Thanks to Freddie - top man!